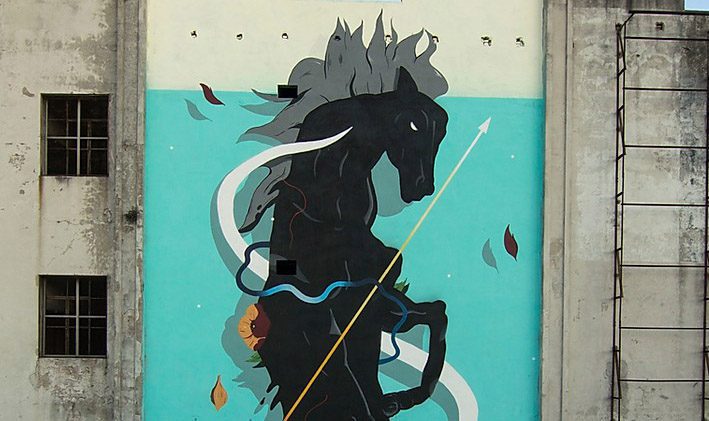 Animals and the color black are his trademark. Cats, tigers, wolves, panthers, snakes and other powerful birds are the main characters in the murals, installations or artwork he develops in his studio. Sabek (Madrid, 1985), who was harden in Madrid’s graffiti scene since he was a youngster, is a master in finding the balance in between the absence of color given by the black paint and the life and energy that radiates from his works. The abandoned areas around the city, and the city itself have been the bootcamp and space for experimentation of this artist that nowadays exhibits and participates in Street Art festivals in countries such as Brazil, Argentina, USA, Norway or Russia. His next show in Madrid, scheduled for May at Swinton Gallery, will now have to wait. Spontaneous and joyful, we go with him through some of his life musts, wants and don’ts.

Your first memory painting… Like 15 years ago, a morning train in Pitis, the Madrid’s outskirts. It arrived at 7am and at 6:30am we were hiding waiting for it to jump out and paint some fast graffiti.

The last thing you painted in the street… A color piece with my name in Madrid’s highway M-30.

Street or studio work? Now that I’ve move to a new studio I’m enjoying this pretty much. I’m able to work on big compositions and do some experimentation. But the street has given me a lot, I’m a street guy.

Your color… Black, the color absence. 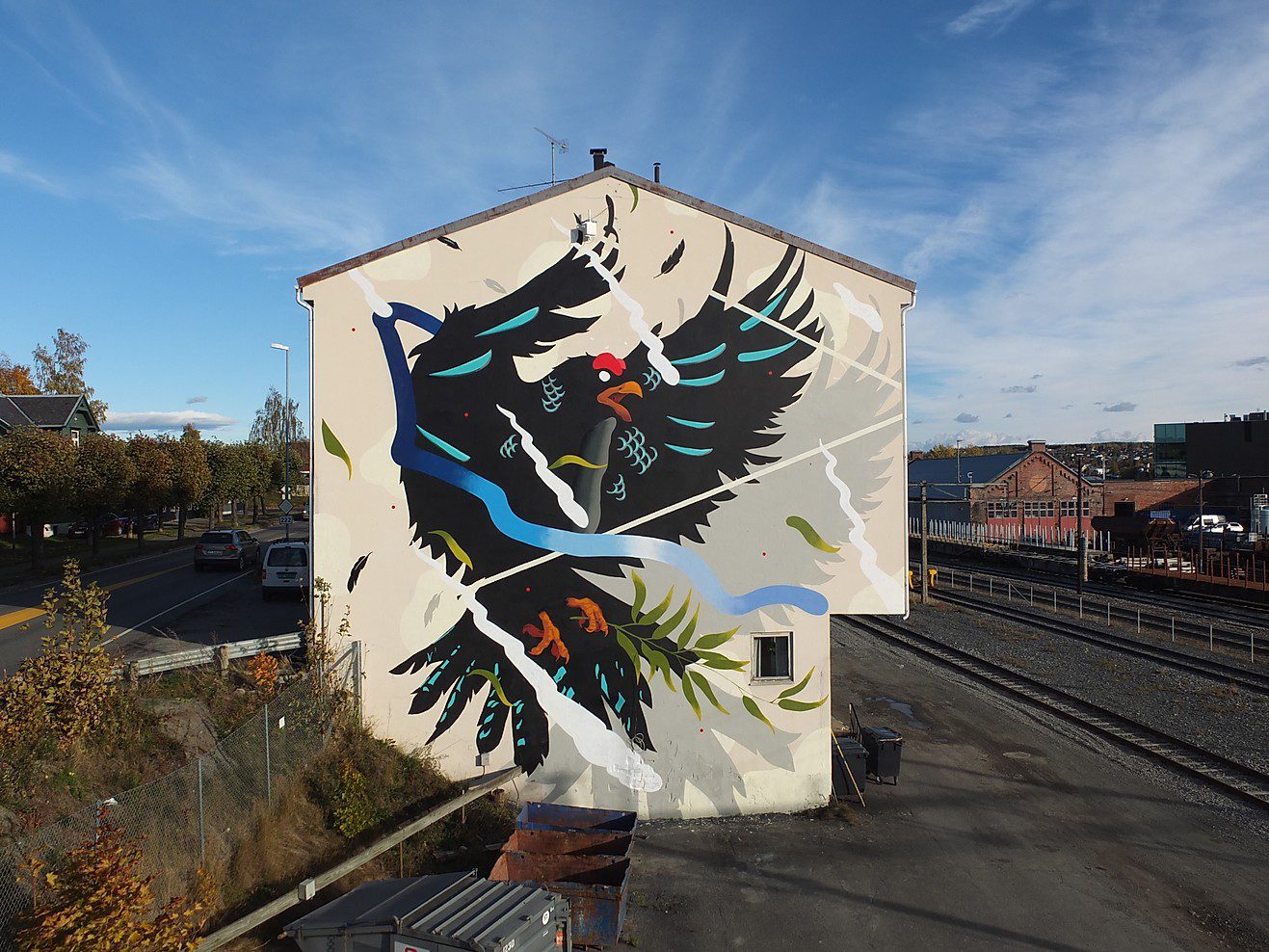 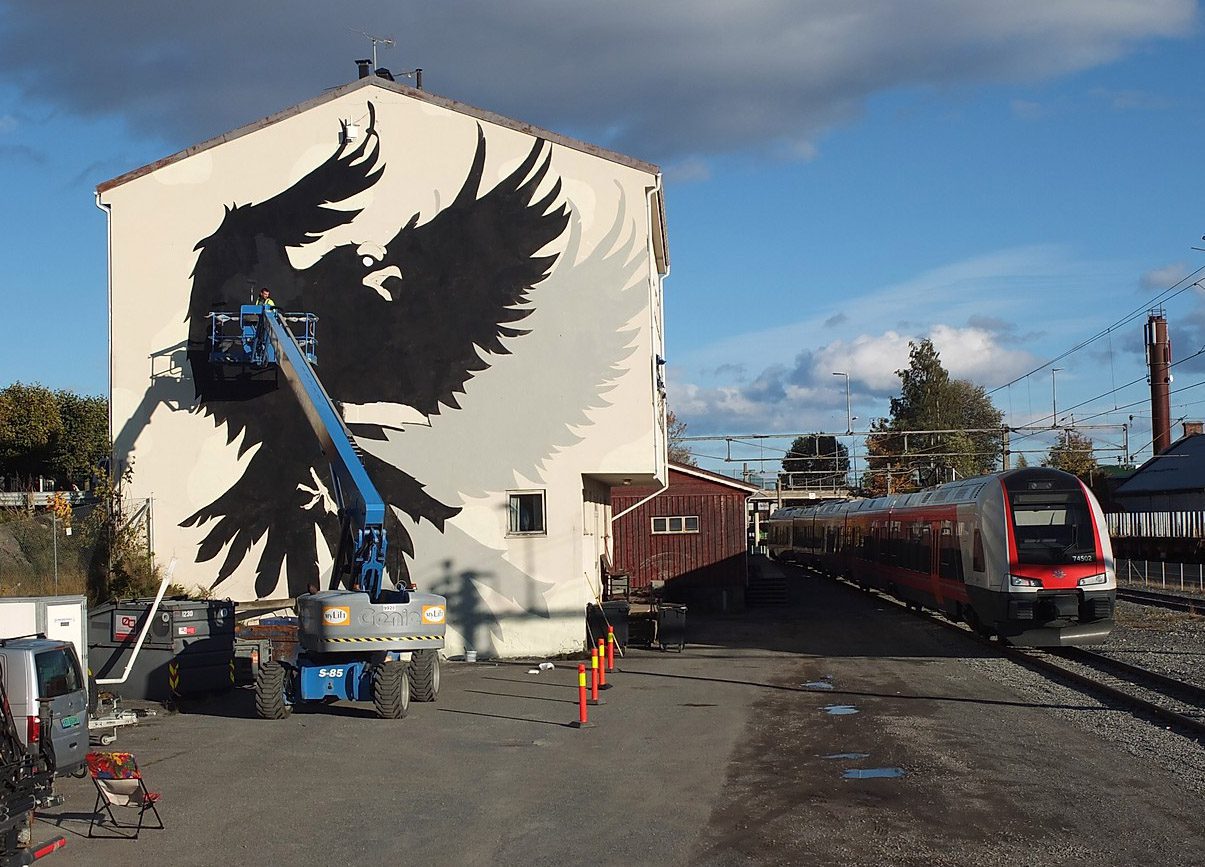 A daily routine… I don’t normally have one but it’s true that the confinement has given me some exercise routines.

Who would you like to make a collab with? Spok Brillor.

An artist you admire… Felipe Pantone.

An artist less know but with great projection… Gviiie.

A painting style… I love the animalistic representations.

The work you’ve enjoyed the most… The 17-story building that I painted in Moscow in 2019. It was such a challenge! 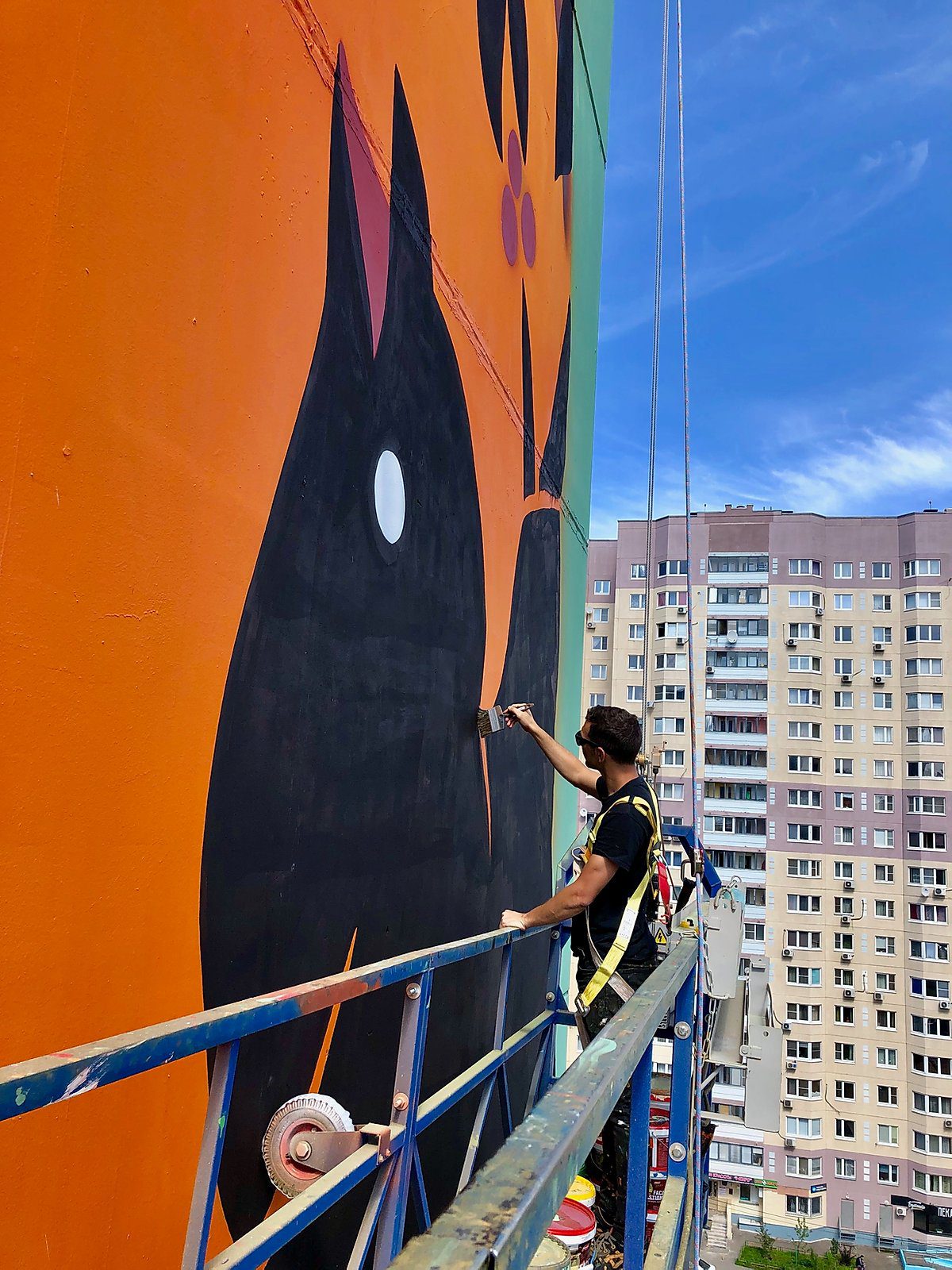 And the work you’ve done that you like the most? I don’t think I can choose one in between my ‘babies’.

Any crazy experience while working? Four years ago I was in Malaysia working on a project when I got contacted for a job for one of the Sultan of one of the States, he wanted me to do a mural there. It already sounded exciting and all of a sudden there was this huge expectation from the media. I was on the local newspapers, everyone will come to take pictures while I was painting… I felt like a movie star, it was crazy!

A turning point in your career? ‘Nature Noire’ exhibition in Paris in 2018. 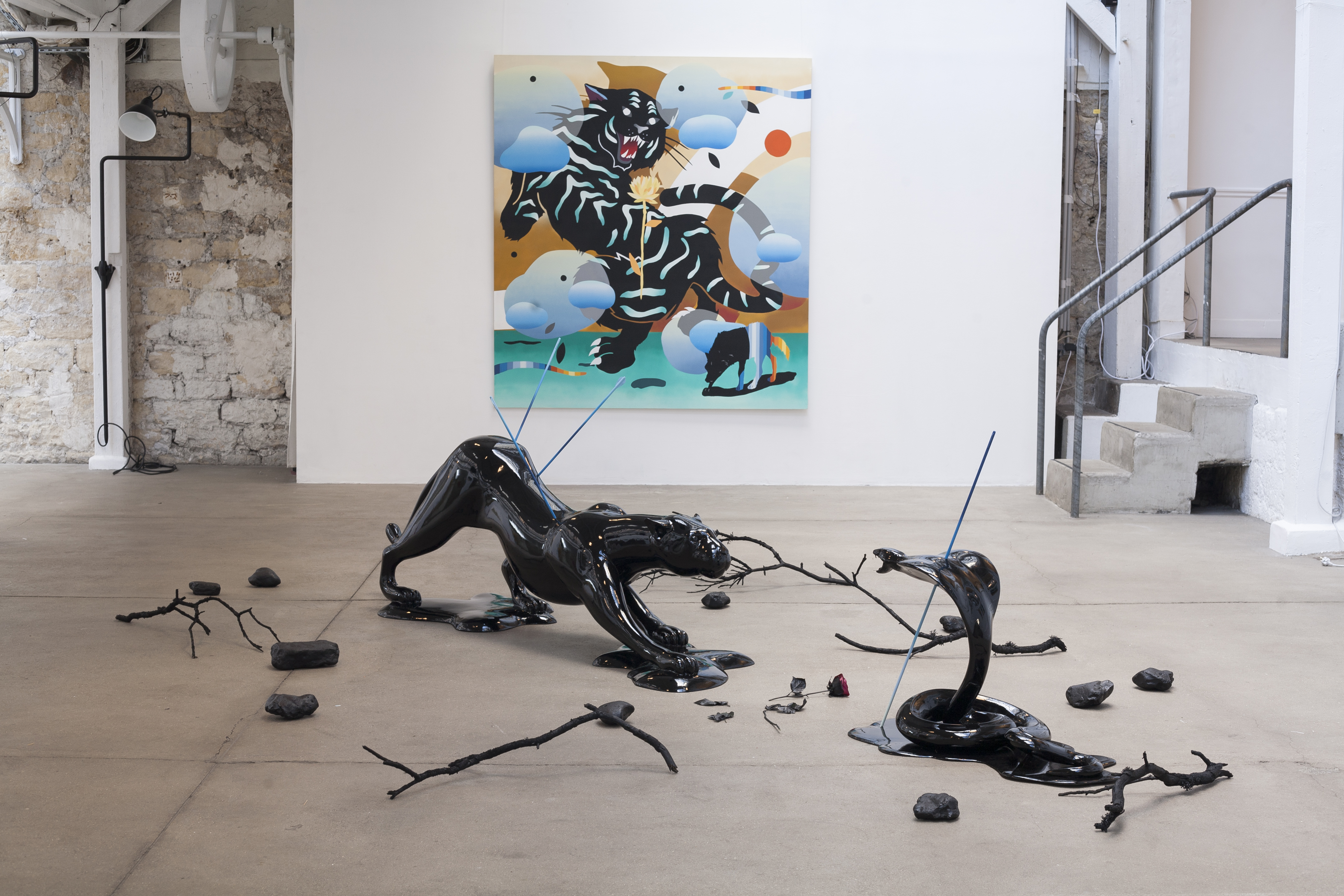 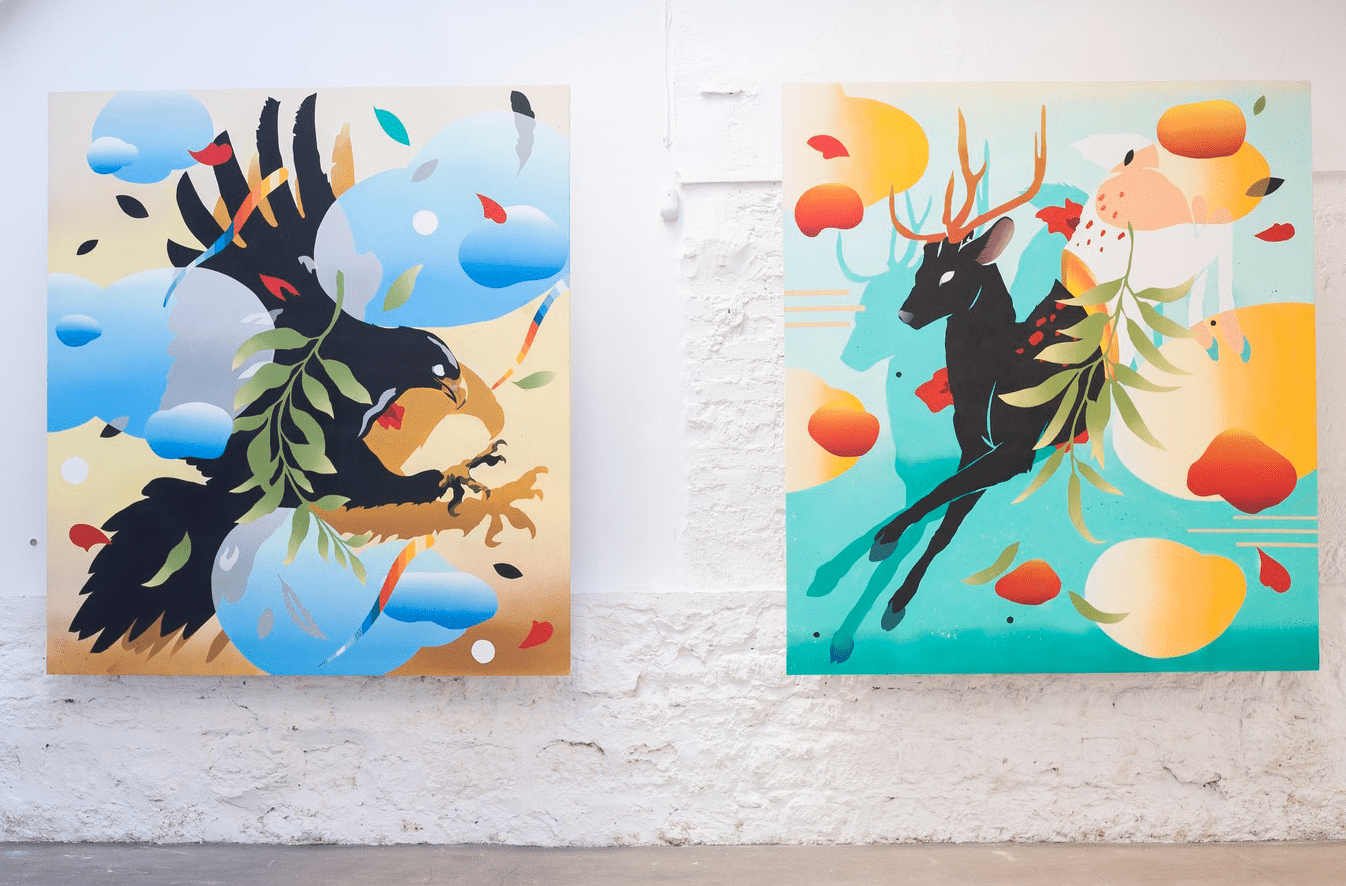 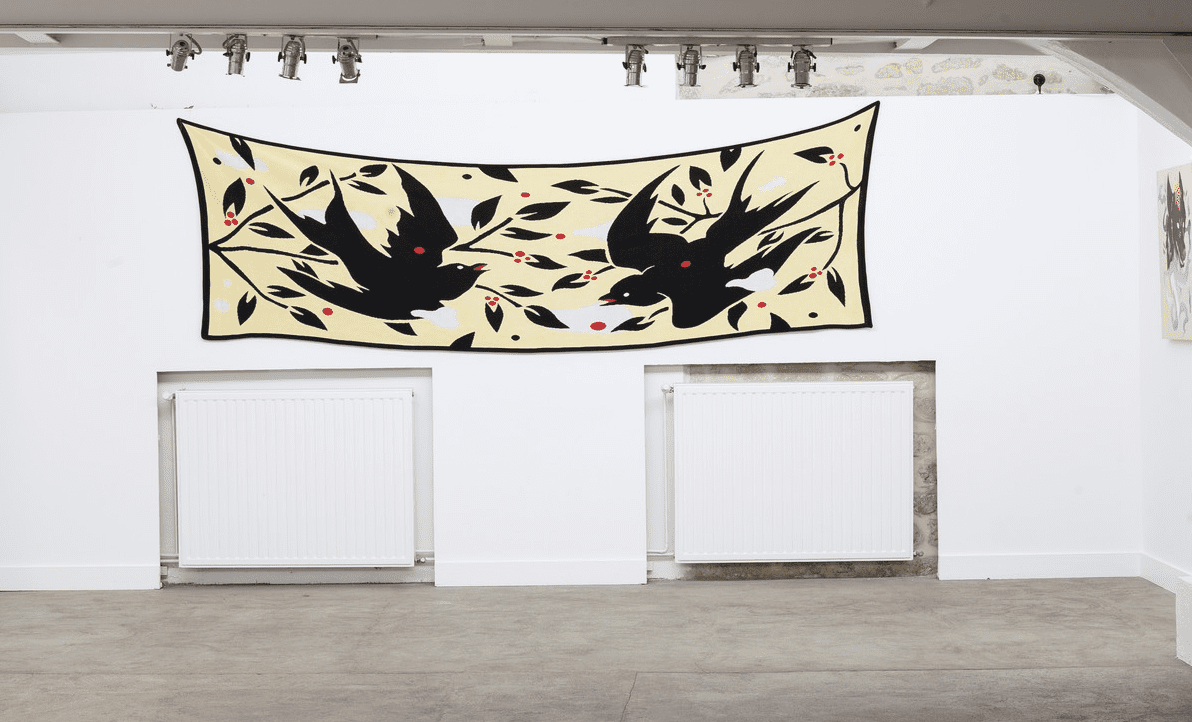 Your master? Everyone that has surrounded me during these years has been an influence and master to me.

Describe your work in three words… Synthetic, naturist and black.

And your personality? Potent! 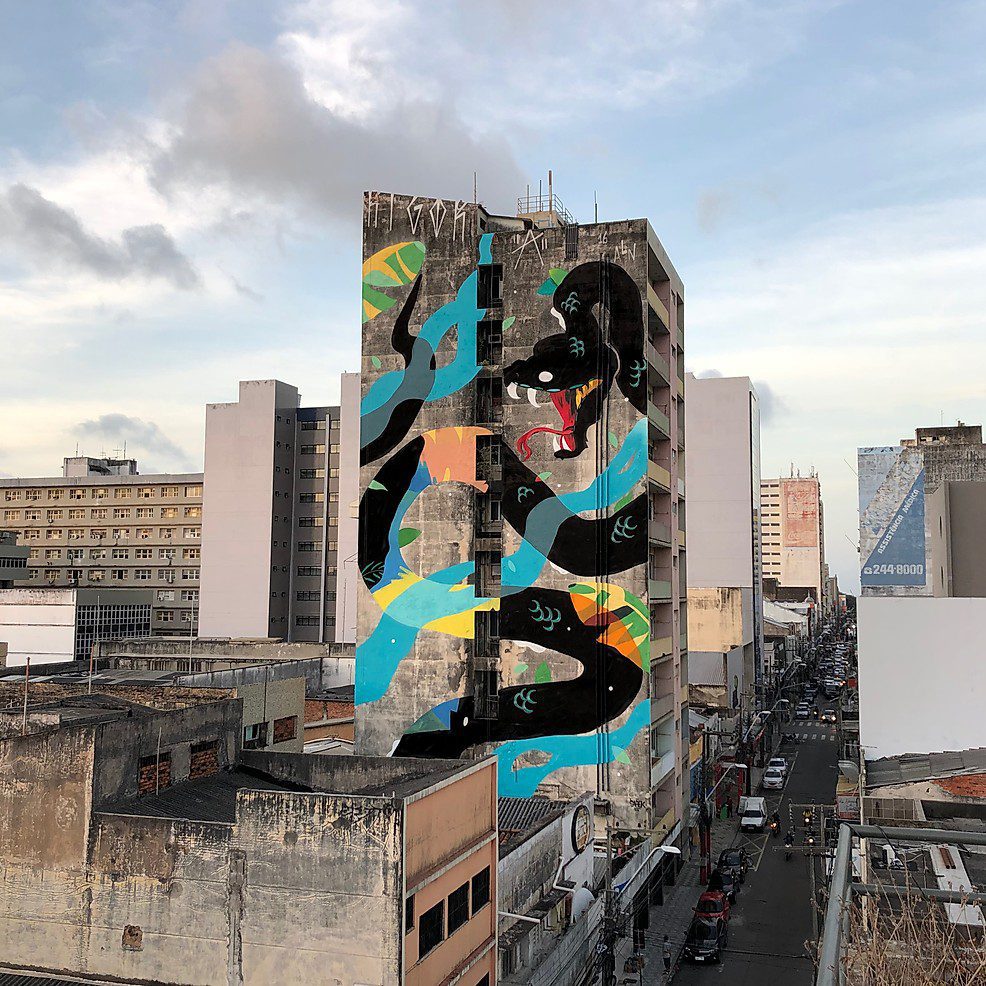 A city where to pain… Berlin.

A special spot for you… My family town house near Ávila.

What do you hate? The envy.

An animal… The wolf. 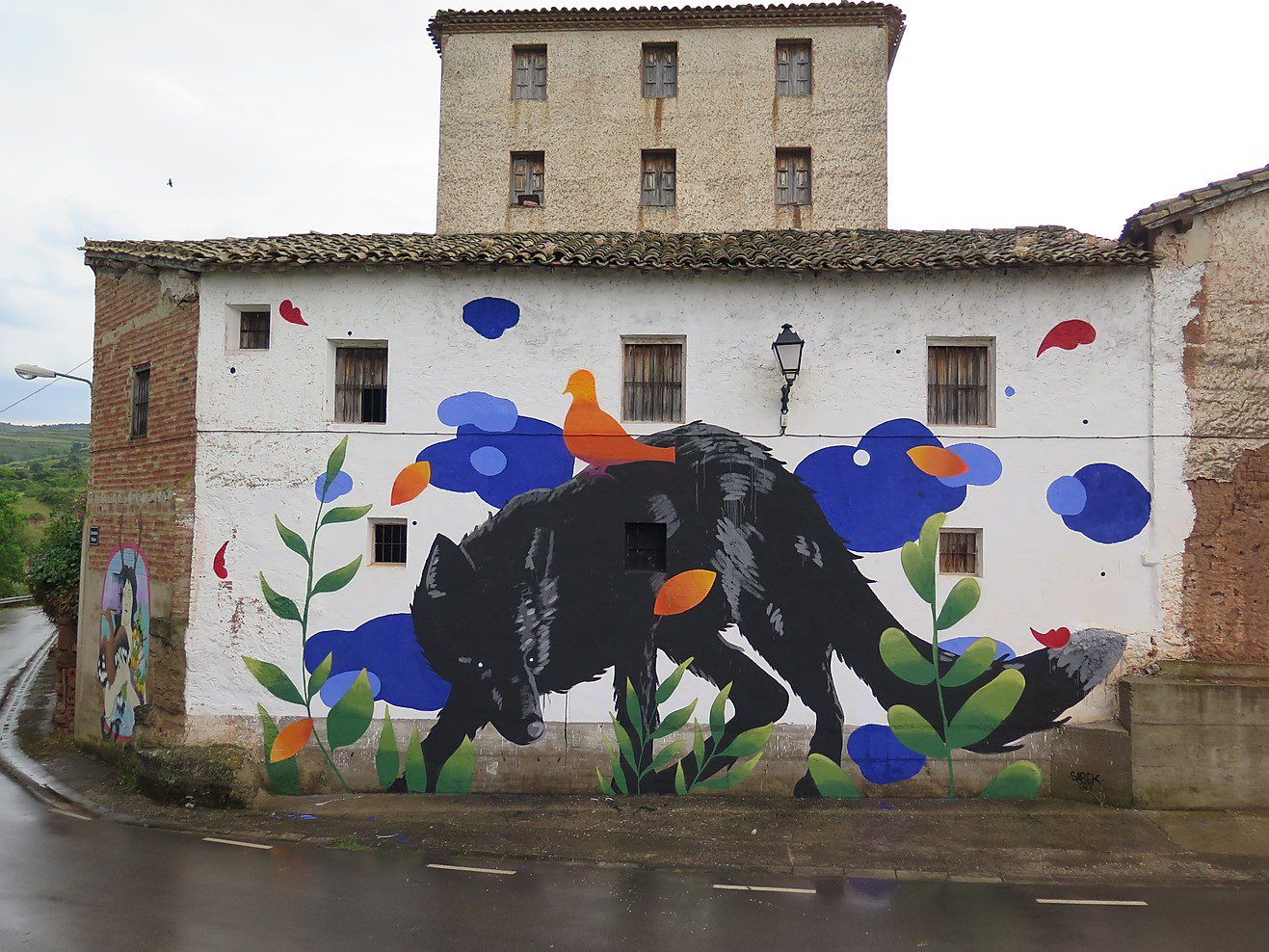 A book… “Catching the big fish” by David Lynch is great for artists. Also anyone form the ‘Beat Generation’.

The last movie you’ve seen… “Malgré la nuit” is the last one but I would recommend “Spirited Away”.

A serie… “Tiger King” for some laughs. 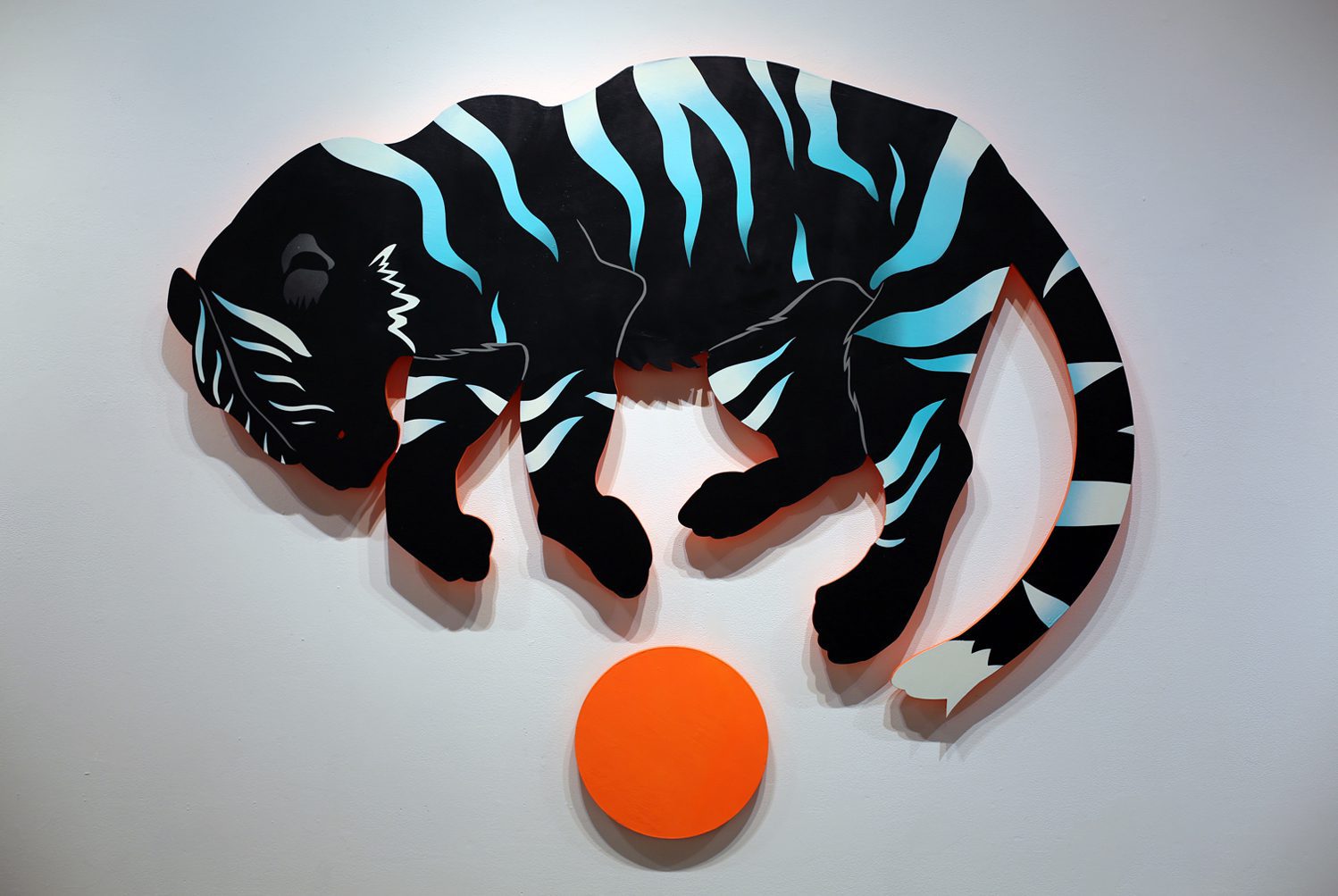 What music inspires you? Disco music.

A museum or art space… The National Gallery of Art in Washington DC.

An artwork… When I was little I was amazed by Velázquez’s dogs.

A mural wall… Anyone that Aryz has done

A bar where to find you… La Mancha in Madrid, in Lavapiés neighbourhood. 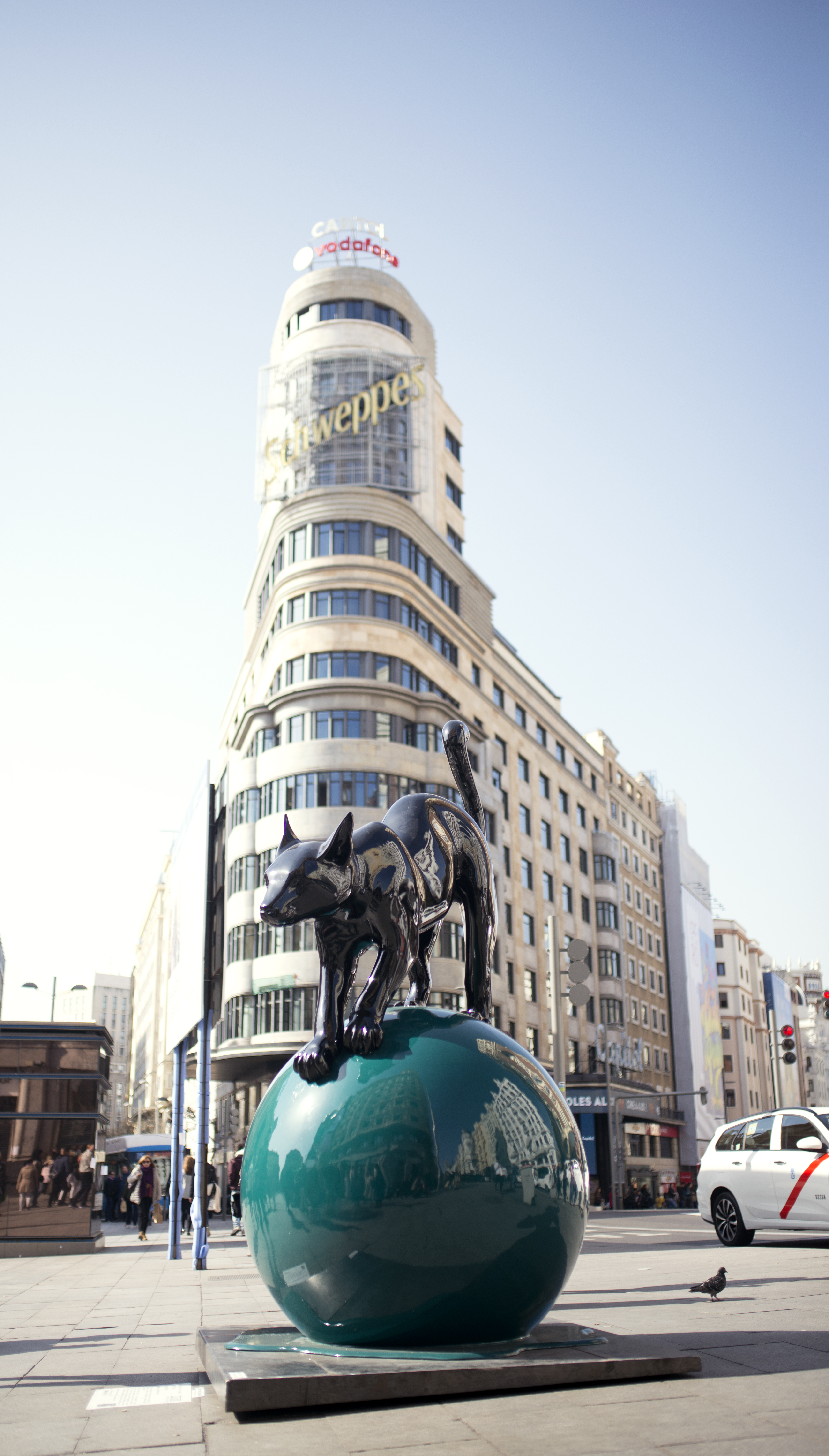 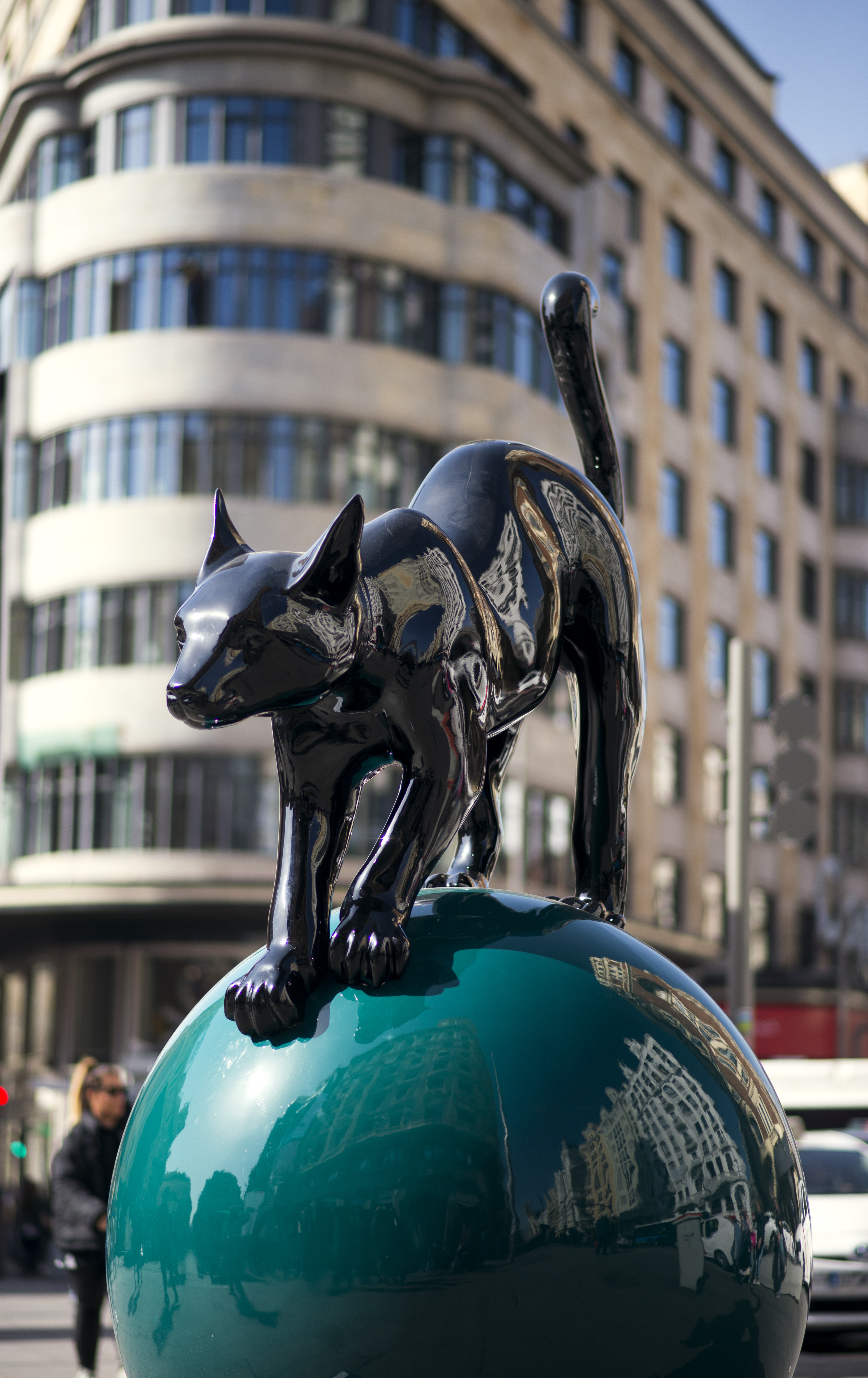 What do you fear? If you say it out loud they become true…

Any fixation? I’m not really a maniacal person… This you should ask better my mom!

Alone or accompanied? With someone.

In what do you waste your time? When I leave home in the mornings, so much! 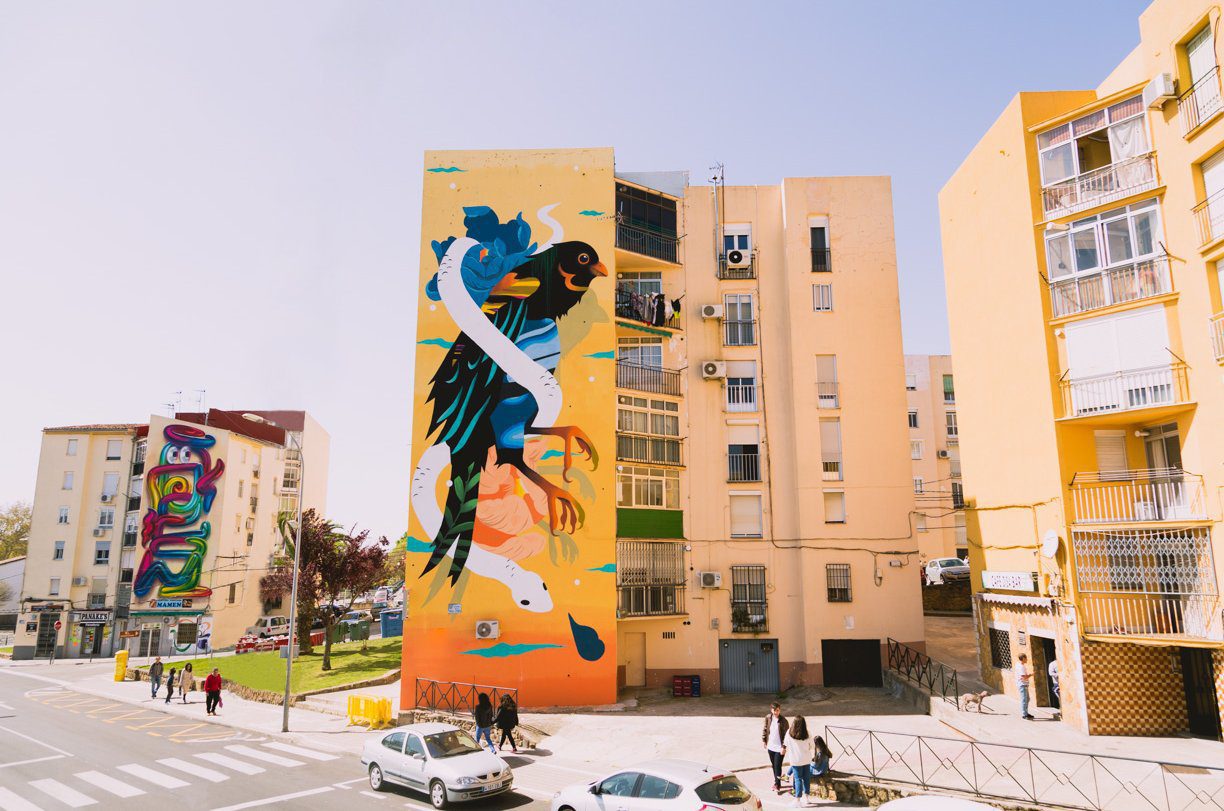 A goal… I’d like to do a project in Japan.

What are you working on right now? I’m artwork for my next exhibition in Swinton Gallery. It was supposed to be in May, now we shall see what will happen…

Your ideal future life… It would be surrounded by nature, with a big studio to work and with all my goals achieved.

Your mantra… “Only risk was a creator”. 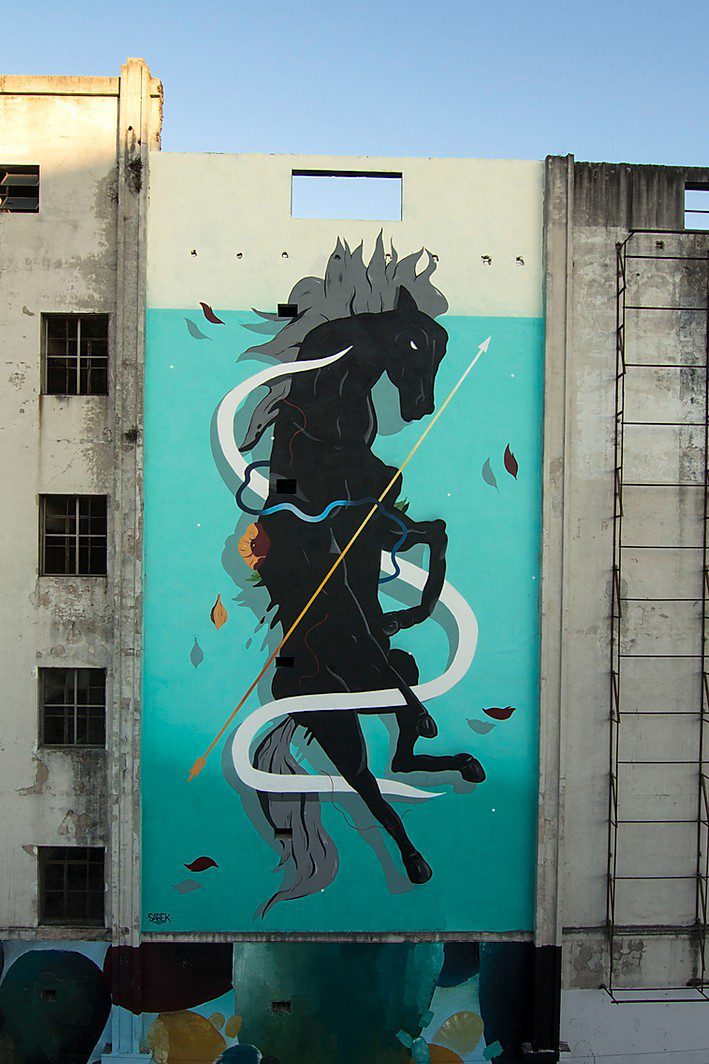 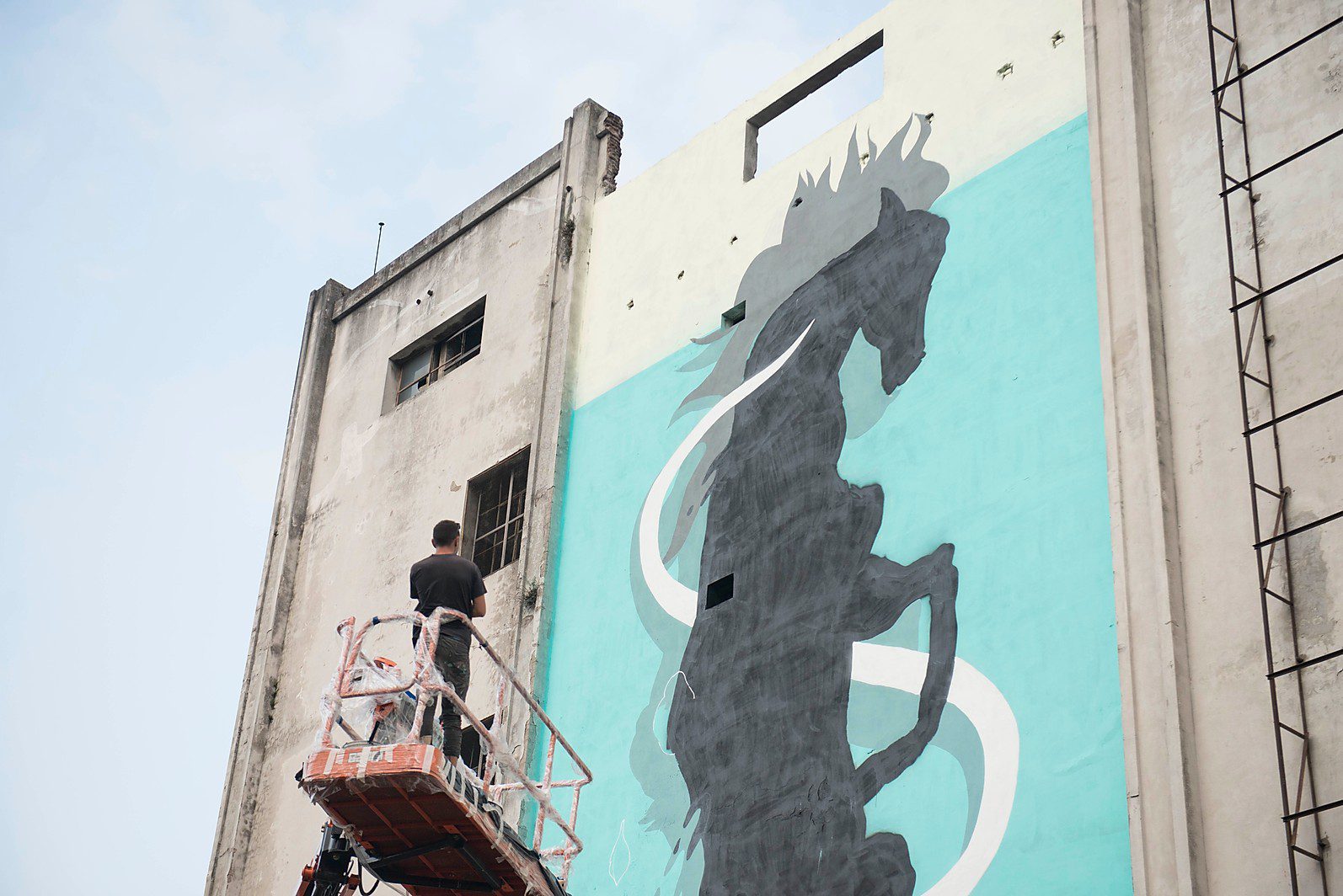