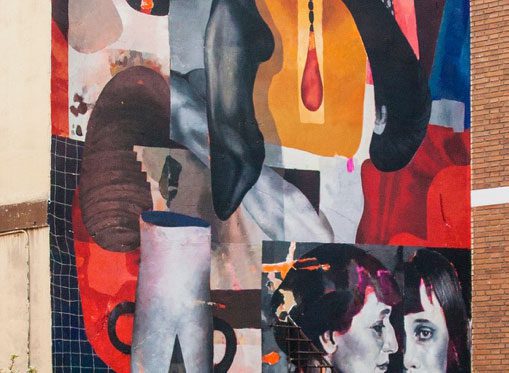 After our first Street Art walking tour discovering some of the large-scale mural interventions in the area of Fuencarral street and Chamberí neighborhood in Madrid (click here to check it out), we now move to the Downtown area to come across the artwork of six number one artists from all over the world.

We enter the heart of the historic neighborhood of Lavapiés to walk through it guided by its art. This neighborhood, with a strong united community,  breathes the flavor of the world through every pore: Indian, Senegalese, and Moroccan restaurants and grocery stores mingle with lifelong traditional Spanish bars, and a wave of trendy cafes, bakeries and restaurants, crammed with young people, have arrived to the neighborhood to stay. Latin barbershops, bike lovers stores, organic supermarkets, public parks, Cultural Centers, Reina Sofía Museum, art galleries… but above all, you will stick to it for its life in the streets. We take advantage of the proximity of several local markets on our artistic walk to introduce a couple of short breaks along the way and recharge with a beer or two. Let’s go! 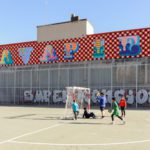 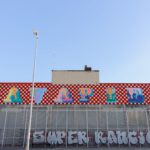 We start off our second Street Art walking tour in Madrid by Embajadores roundabout, right next to Tabacalera. This space, divided into an Art Center with Contemporary Art and photography exhibitions and a self-managed Social Center, is a good spot to catch some good and fresh graffiti pieces by local writers and see more than a dozen artistic interventions by national and international artists on the wall that surrounds the building. In Casino de la Reina Park, right in front of it, is where we will find our first big mural by the British Ben Eine (London, 1970). This Londoner, known internationally for his caligraffiti artwork, went from bombing the streets of his city in the early days to fill the streets of LA, Mexico, Miami, Paris, Tokyo or Dublin with his typographic alphabets and becoming one of the most recognized British artists. This wall in honor of the neighborhood where it’s located is one of the few pieces of the artist that you can get to catch in Spain. 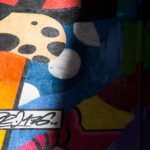 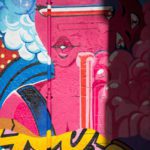 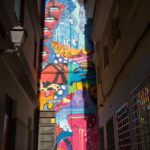 On our way to the second artwork, we literally bump into San Fernando Market, a must hot spot if you are visiting during the weekend. In this market you will find a fresh multicultural offer, just as its neighborhood, with Mexican, Portuguese, Peruvian, Greek or Spanish strolls where to grab a bite. On the alley you will find exiting through the downstairs door of the market, you will find Pro176’s wall (Paris, 1976). A pop surrealistic style full of shapes and colors that he transfers directly from Kirby’s comic imaginary and other cubists influences. Pure graffiti avant-garde imbued by Marvel, abstract futuristic mathematics and literary constructivism that has helped rehabilitate the alley where it’s found in a context of infinite stars and galaxies populated by superheroes or supervillains. 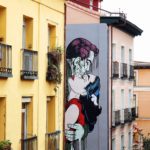 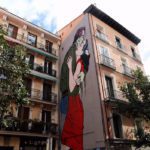 Walking Embajadores Street heading towards the dominical el Rastro street market, we will find halfway the impressive wall by the prolific artist D*Face (London, 1978), his first one done in Madrid and second in Spain after his collaboration with Shepard Fairey in Málaga. With a similar trajectory as Ben Eine, this artist spent his teen years bombing the streets of London and other important European cities such as Barcelona with ‘paste-ups’ of his recognizable D*Dog and has occupied the forefront of his practice ever since his initial breakthrough in 2005. Instantly distinguishable and flawlessly executed, his work upholds the vibrancy of Pop, whilst injecting it with a signature dose of satirical subversion that has become synonymous with British street style. «The design of this piece comes from my last body of work. ‘Runaway’ has got a play on words in terms of the paint being drippy. The guy is disappearing and running away from problems, from a relationship. That’s an artistic, graphic play on a situation, on a feeling», explains the artist. 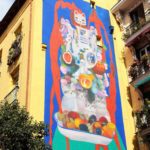 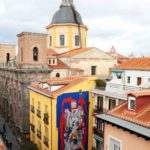 In the wall right in front of D*Face’s, you will have probably already discovered Ever’s (Buenos Aires, 1985) still life collage, a mix of elements representing the surroundings of the area. «I always try to investigate the place where I’m going to paint before I go and if I have the chance I work with the objects that are around that wall area. When I arrived to Madrid and started this project, all the information I asked about the neighborhood was actually there. The different communities of different nationalities, the curry smell, the barbershops… From this sense of strong community situation, Matisse’s painting of the dancers came to my mind: people dancing in the same place and holding hands. That was my starting point. Then I worked with other elements that could refer to the famous street market of El Rastro. The cats were just a coincidence, I didn’t know the people from Madrid were called ‘gatos’», says the artist Nicolás Romero about the wall that represents the link in between old classical elements and new paradigms of the contemporary society. 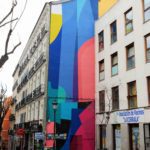 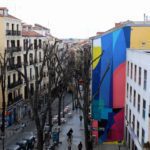 Let’s immerse ourselves deep into the heart of Lavapies neighborhood to get to our fifth stop of the tour. When the curry smell of the restaurants of the area actually starts invading the air around us, then we know we are close. The French artist Zest (Montpellier, 1980) discovered graffiti as a kid and it was around 2000 when he eventually started introducing his studio work. He left the figurative and graffiti code style to a more contemporary, abstract and cubist direction of art. The energies found in different disciplines are translated through the use of basic shapes and primary colors, seeking harmony in between them. «The striking colors symbolize that side of graffiti that remains with me and wants to attract the viewer at first sight, even before that person is able to develop an opinion about the piece, good or bad. Also, the superposition of shapes reflects the accumulation of energy and movement», says the artist. Zest’s signature is found on numerous murals around the globe like Toulouse, Montpellier, Buenos Aires, Las Vegas and Zaragoza. 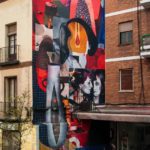 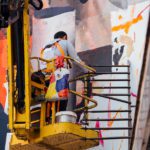 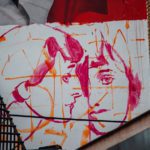 Only a few minutes walking distance we will find the sixth and last street art piece of the tour. This wall by the Russian artist Marat Morik (Novosibirsk, 1982) pays homage to the also Russian poet Anna Akhamtova and the representation of her imaginary through the combination of overlapped geometrical shapes, colors and textures. This artist, illustrator and graphic designer started developing his passion for graffiti through his lettering work. In his latest body of work he has shown a bigger relevance in patterns, paint mixing techniques and comprehension of figurative and abstract techniques mixed with realism and expressionism. There’s no better way of closing this tour than a foodie visit to Antón Martín Market, right in front of this last wall: you will have to choose in between more than twenty food strolls, that just as San Fernando Market does, represents the multi-ethnicity of the neighborhood with elaborated dishes brought from Vietnam, Mexico, Italy, Japan or Venezuela.