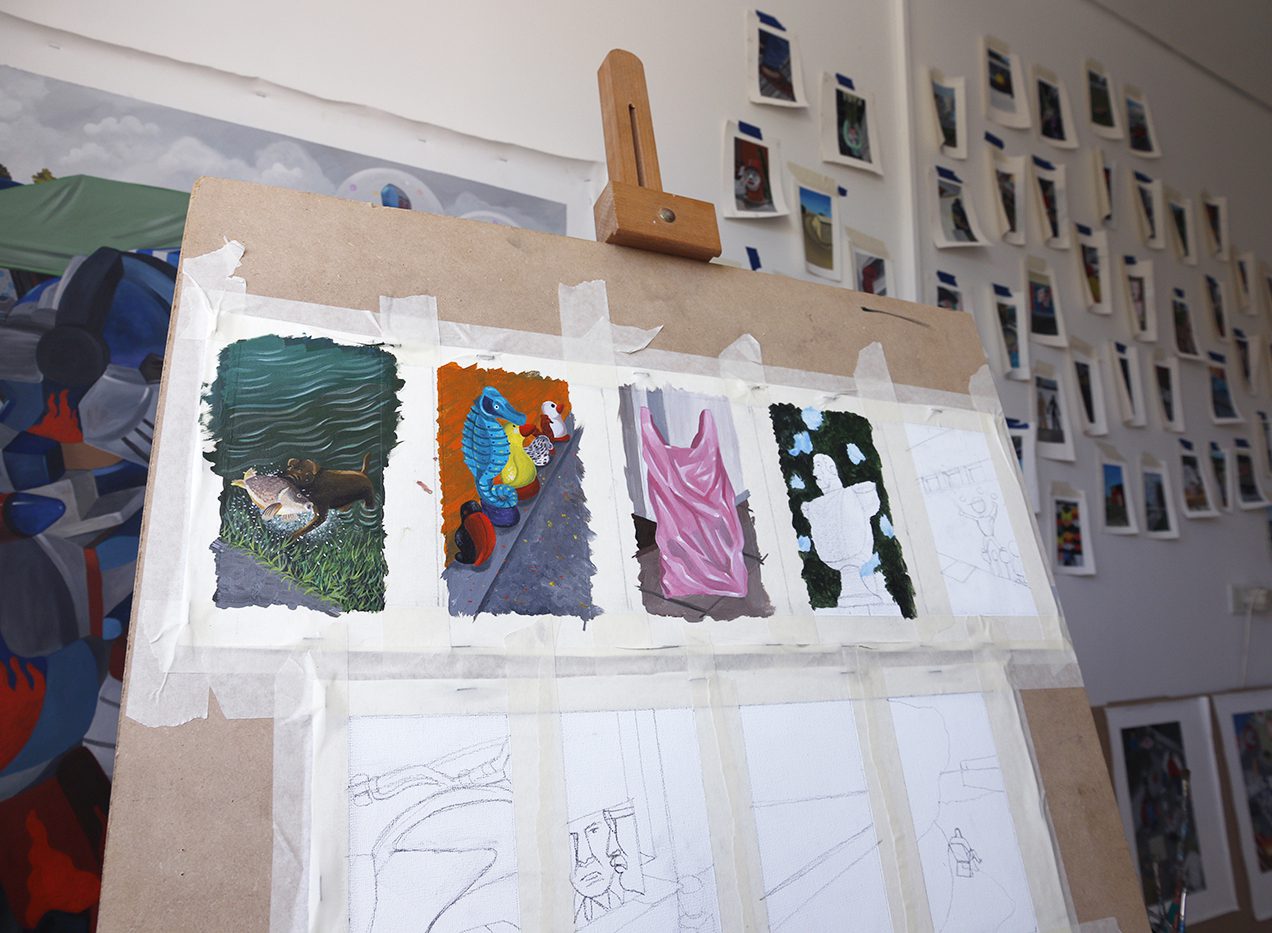 You will know Martin Kazanietz by the name of Gordopelota (Buenos Aires, 1985) and if you still don’t know his work, it is likely that after seeing it, it will never leave your mind again. Amateur soccer, barbecue and a whole imaginary developed around the Argentine popular culture within a single work, a mixture of ceremony and ‘costumbrism’ that leaves no doubt about the origin of the artist. And it is not by chance. This work is the result of a long reflection on cultural identity that Gordopelota has been working on since he started in graffiti, at the age of 24, and later transferred to his work on canvas and paper as a self-taught artist. After years in Buenos Aires, he decided to move with his partner to the city of Viedma, located in the north of Patagonia, in search of a quieter life away from the hustle and bustle of the capital and from where he has begun to develop a work that distances itself from amateur soccer and in which he has begun to work through photographs that he captures with his phone and then paints, as if he was developing them, at the size of the 16:9 screen in small and large format. We talked to him during our eighth Urvanity Meets session about his late beginning in graffiti, the evolution and new directions that his painting has taken, and the freedom and spontaneity with which he now develops his work from his home studio in Viedma, which he will show next February at La Causa Galería in Madrid. Catch the complete talk by clicking here. 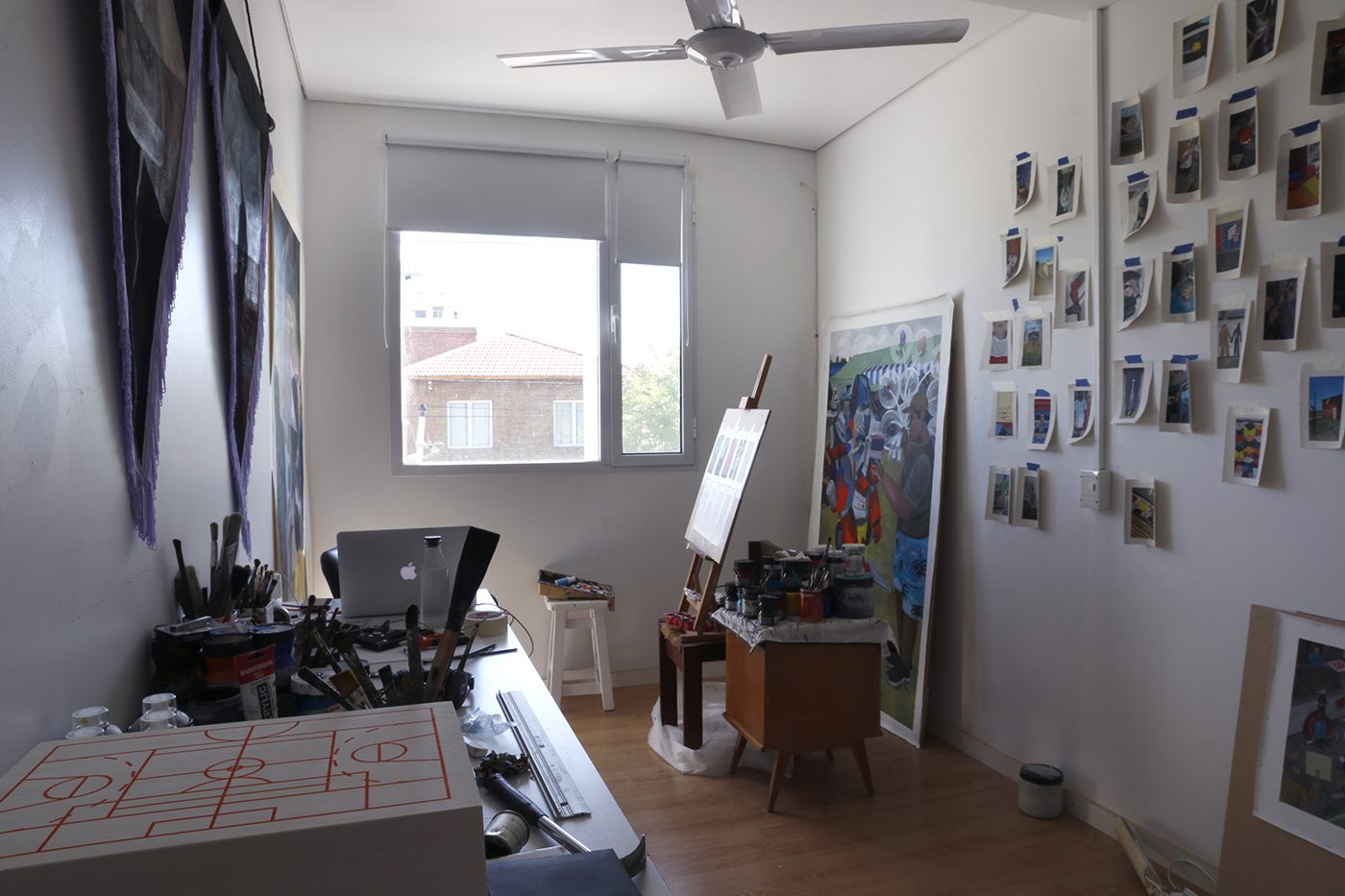 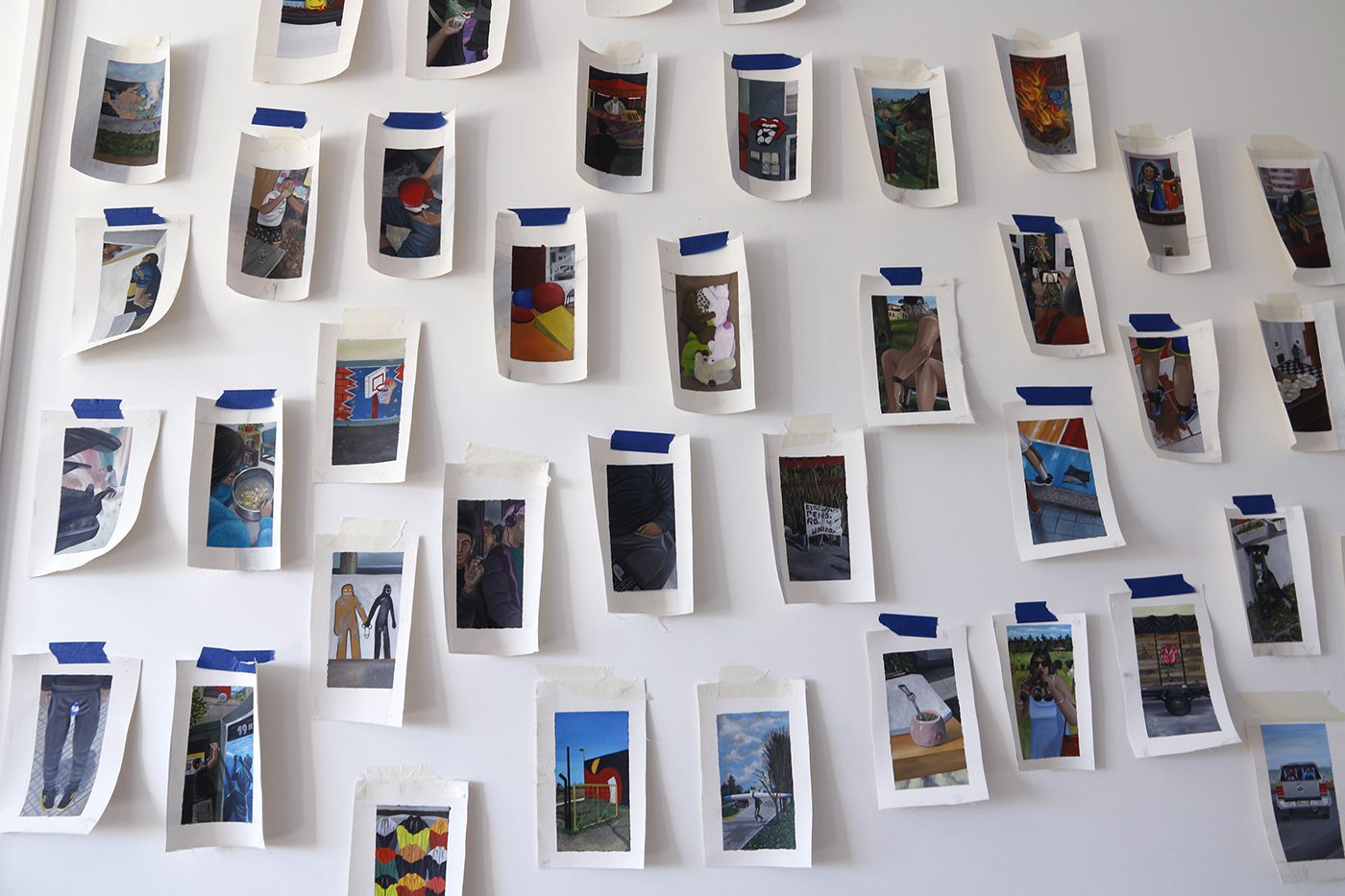 «I have my workshop in a room inside my house. It’s quite small but I have just room enough. I usually paint by the window where you can see the easel. The big paintings I finish I roll them up and keep them in the closet because I have no more room to display them. Now I am working on this series of small paintings, they are phone size and they are photos that I have been accumulating, of things that I see in my day to day. I keep the 16:9 dimensions of the screen. It is like revealing photos but with paint. With such a small format I get this crossed feeling, it is not something that I like very much and it gets complicated because of the size but at the same time it resolves so quickly that it gives me a lot of pleasure, starting and finishing a painting the same day. They are quick to resolve. With these dimensions I’m working in two formats: one that is real scale of the phone screen and also a large scale that measures approximately 1,60×90 of human scale, these bigger ones they do take me some time… ». 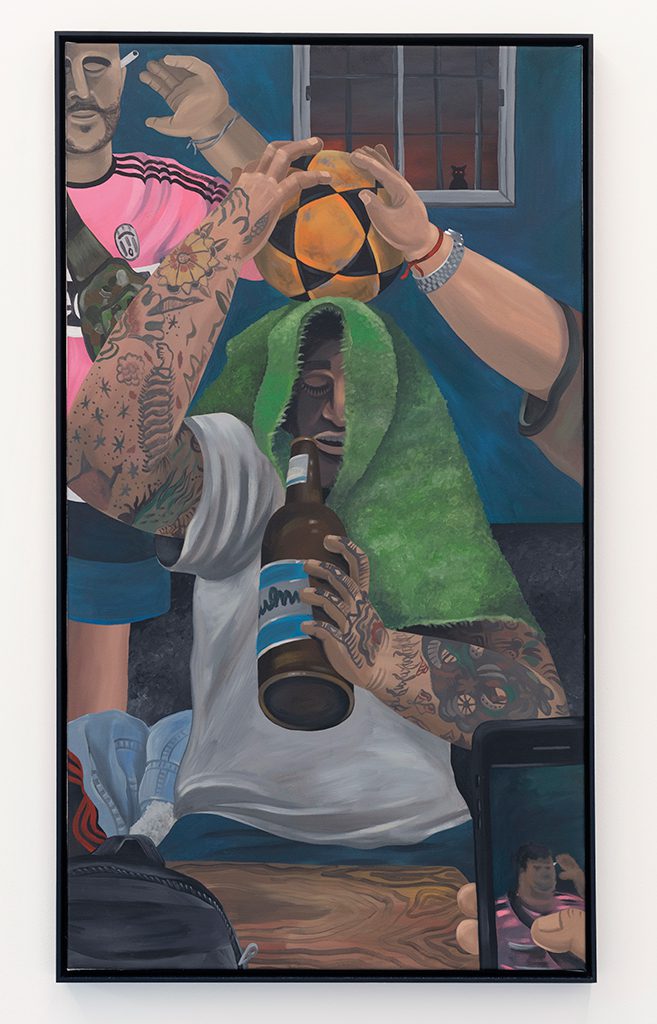 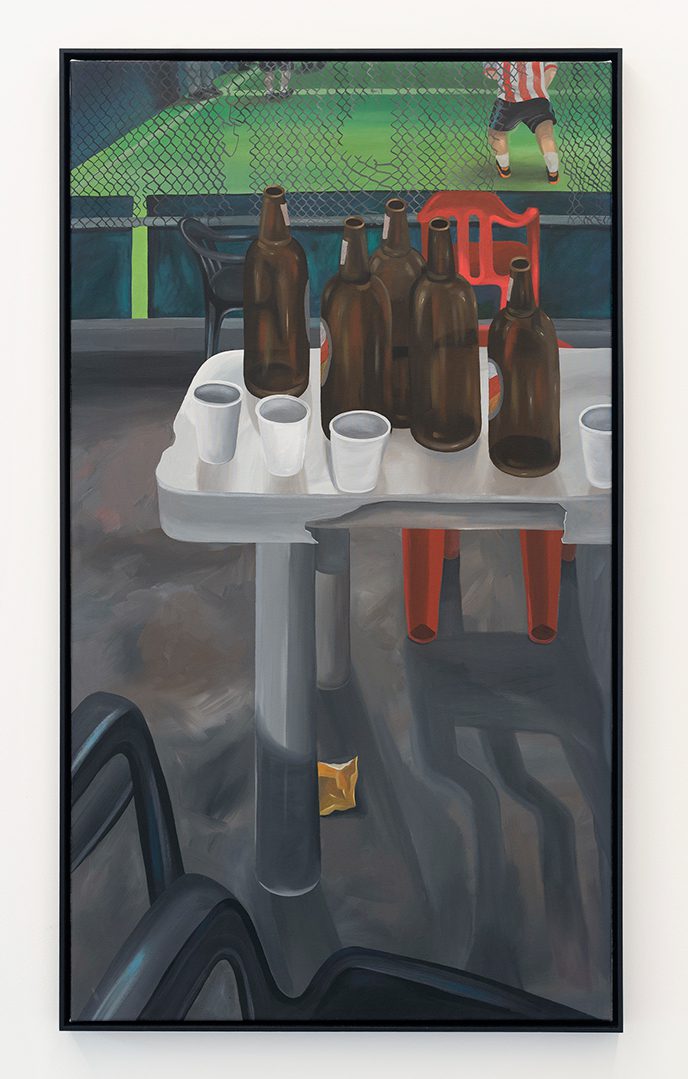 «The theme that I used in my work related to amateur soccer comes from a couple of places. When I was painting graffiti, I began to consume references to the works that came from abroad, especially from Spain, Brazil or Chile. I always admired the fact of seeing those graffiti pieces and recognizing exactly where they do they come from. It made me doubt whether I knew what Argentine graffiti would look like, if there was something that you look at and automatically recognize it as Argentinian. Looking for an answer to that, I started to do things quite literally, like painting a face that looks like it’s from here, characters doing things that we do here… It was my first approach that comes from my teen years. From there, once I started to paint my own things, transcending graffiti and moving on to other media like canvas, I was able to start working on it a little more. Before that I used to suffer a little bit from horror vacui in my work and I felt that every artwork was a Tetris in which you accumulate everything you feel, what you see, what you want to represent… I made some very recharged works with multiple narratives, many things happening at the same time, with little paintings inside the painting… For me these were ways of erasing the solemnity of the image, which was what I used to fear. I think I lost that fear of them being less overloaded, although I still find it difficult. The difference to the work that I’m doing now is that now working with photography I work with an image that already existed in my head and before since I created every image from scratch I needed to fill the artwork, reload it and use all the space to tell as much as possible». 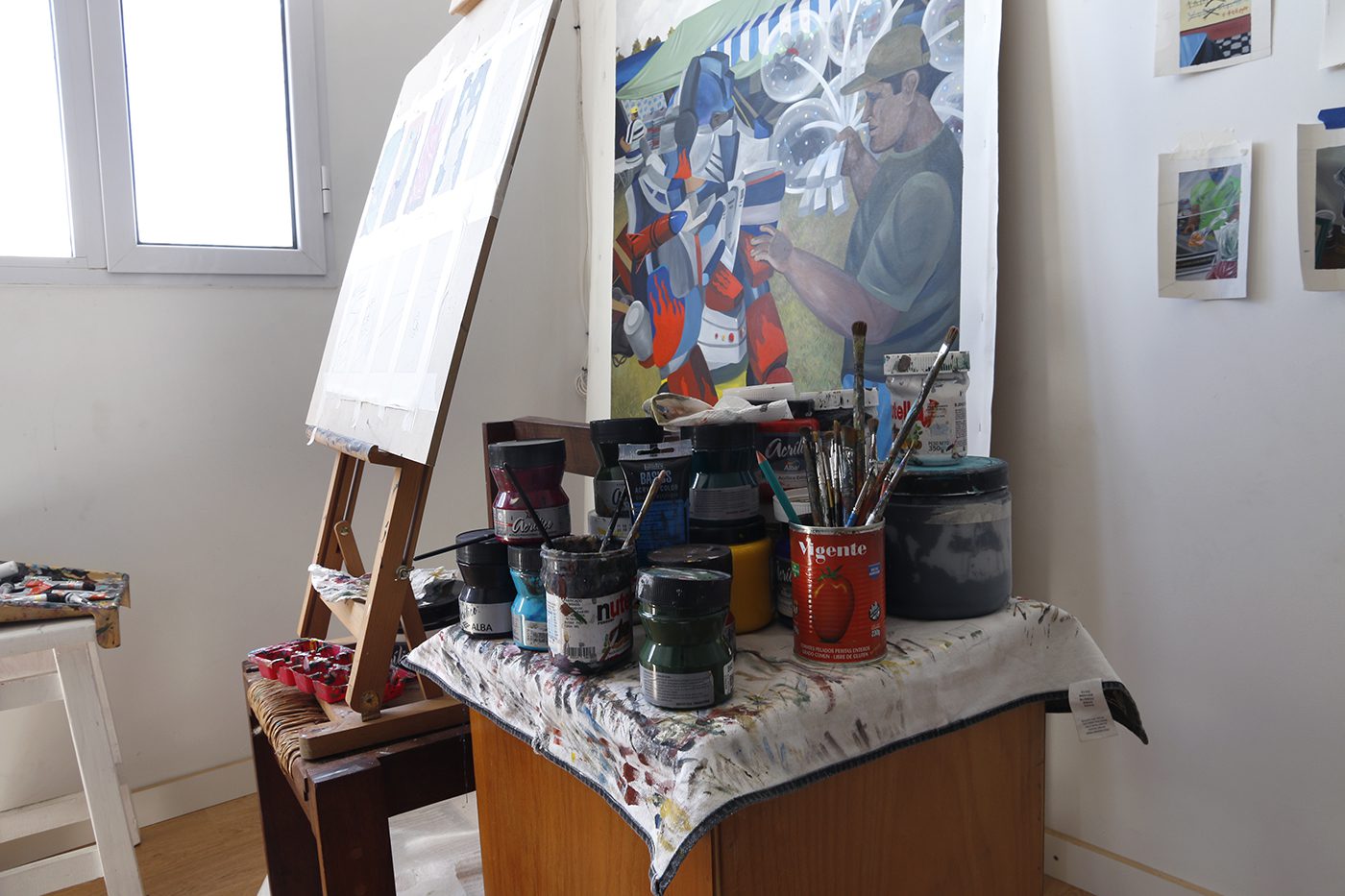 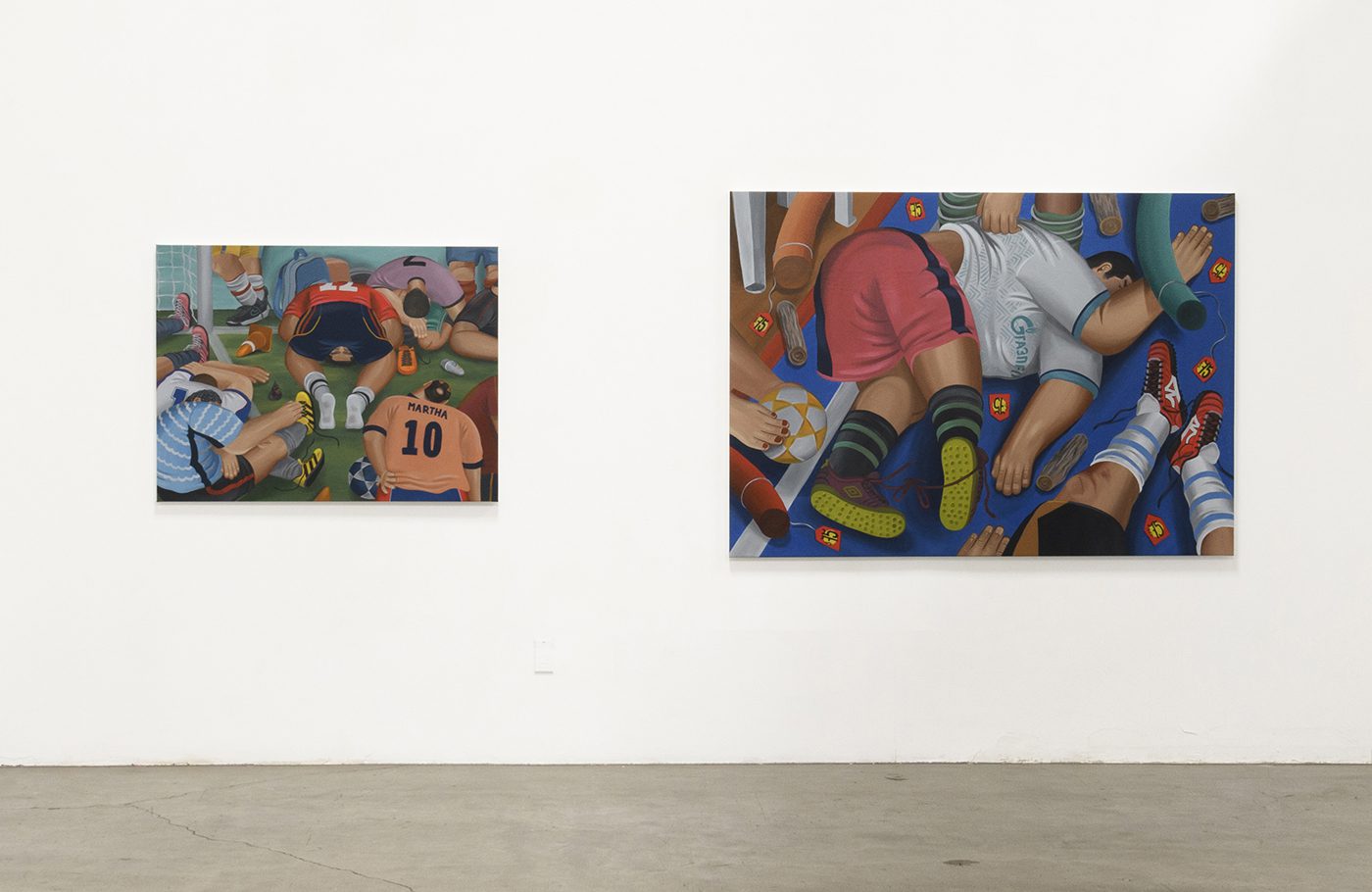 «As a child it always caught my attention Molina Campos’ artwork, a very popular painter in Argentina [who painted ‘gauchos’ or cowboys] who for a long time was the artist who was hung at my grandmother’s house. I found it very striking how this artist developed an identity by painting scenes exclusively on one topic. Within the folklore, the closed and traditionalist structure of it, it allowed me to see an opportunity to answer a question that I had been asking myself for some time: what would happen if this use of a one topic I bring it into amateur soccer, which was what interested me the most at the time and at the same time had a lot to do with me because it was something I would practice on a daily basis. My first paintings tried to answer to that, I would paint only about that and I would develop a whole imaginary around it. But I felt that it was something that could work on a short term, I wasn’t going to dedicate my whole life to doing this and I was very interested in doing other kinds of things. I felt this freedom of not having to be tied down in aesthetics or in a way of painting or solving. Now I feel I can respond in a more spontaneous way and do what I want to do in each moment. There is something in that idea that has to do with generating an identity, it can be quite associated with the commercial side of it, with Street Art or muralism, in which you develop your own aesthetic, a palette of colors, something that identifies you and that is going to simplify the way in which you are going to reach an audience or consumer of your work. I feel that it is a bit limiting, and although I try to fight against that on a daily basis, I stopped thinking that this was something necessary for me when I was building my own artwork». 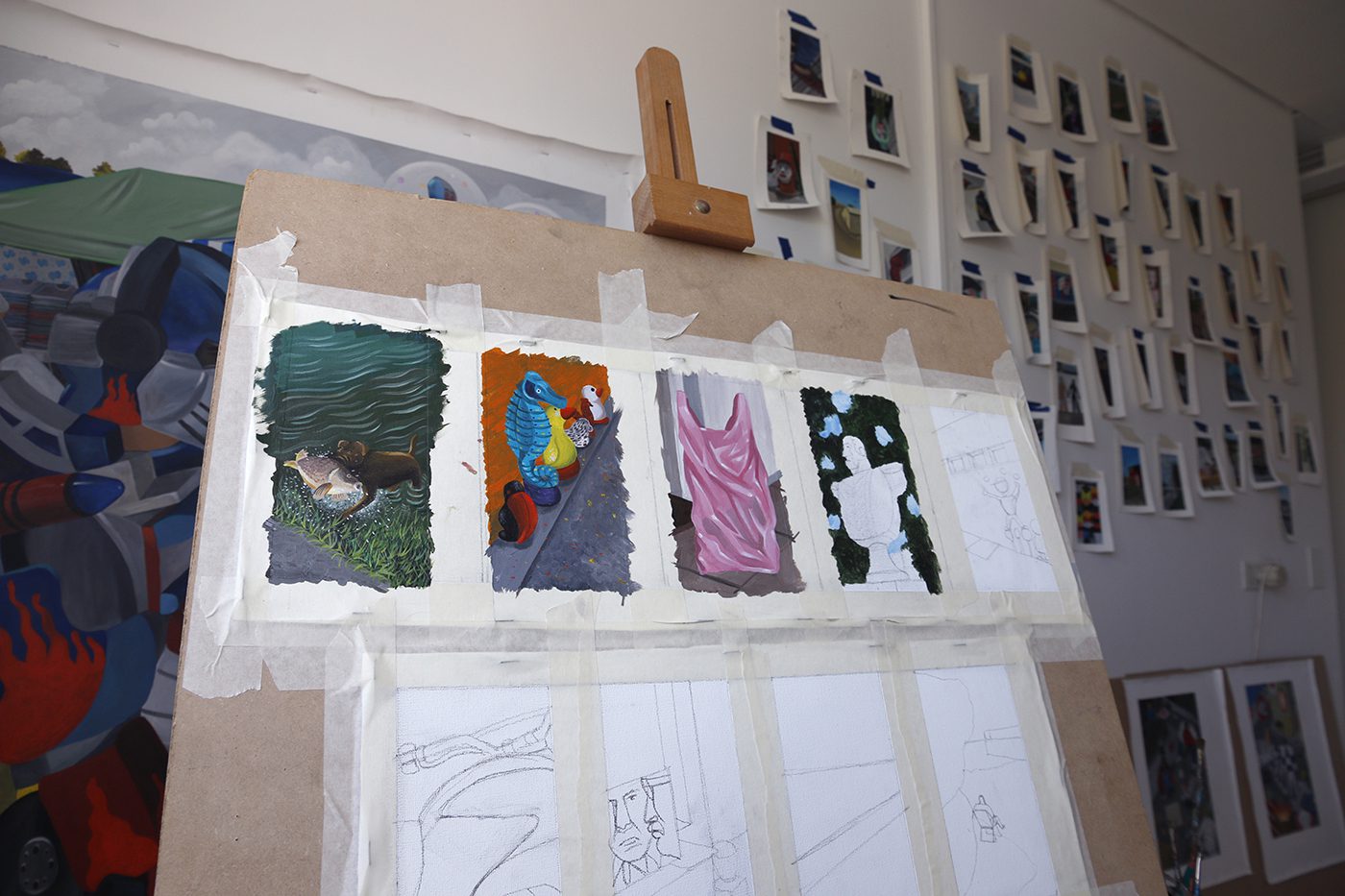 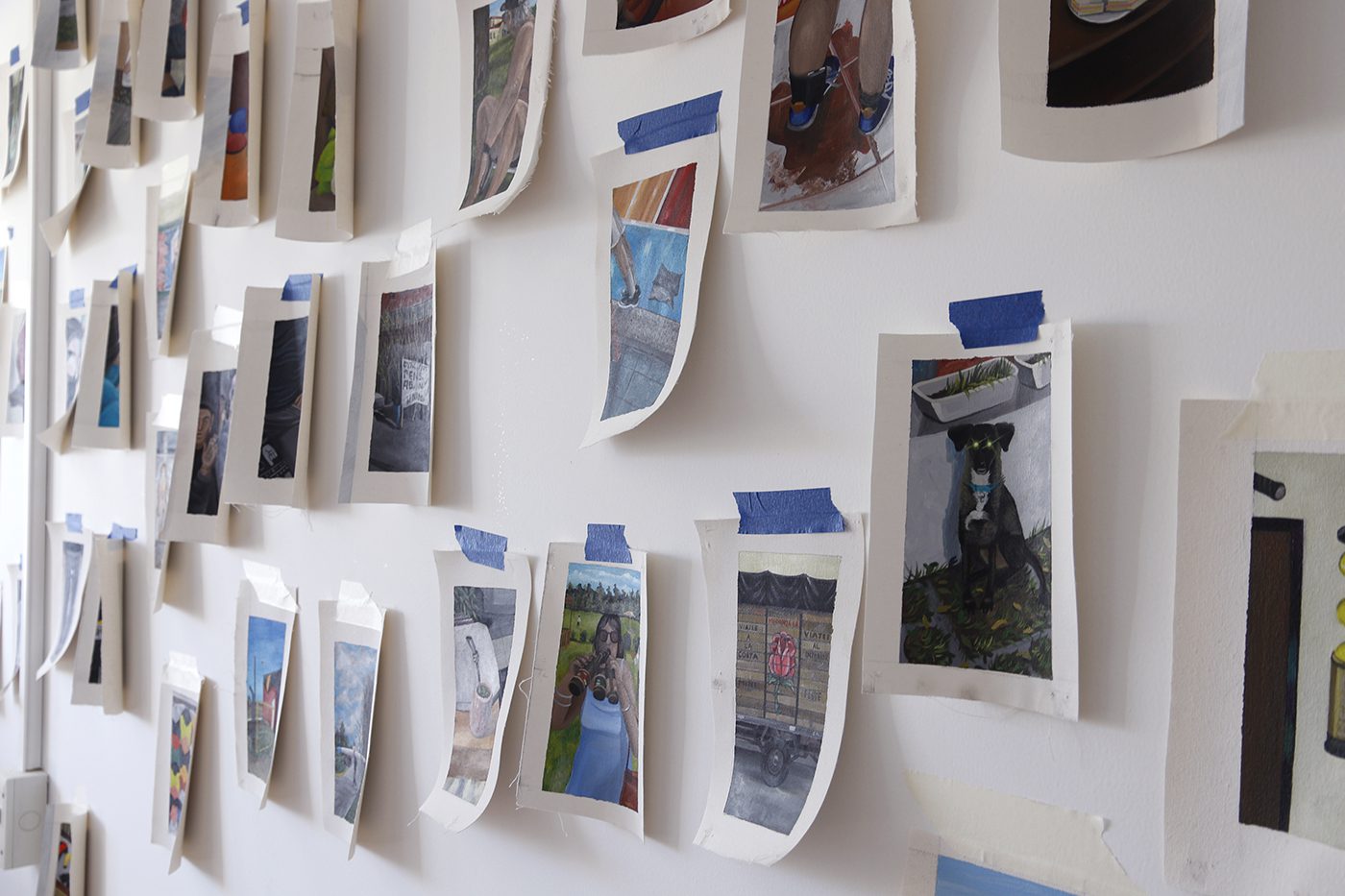 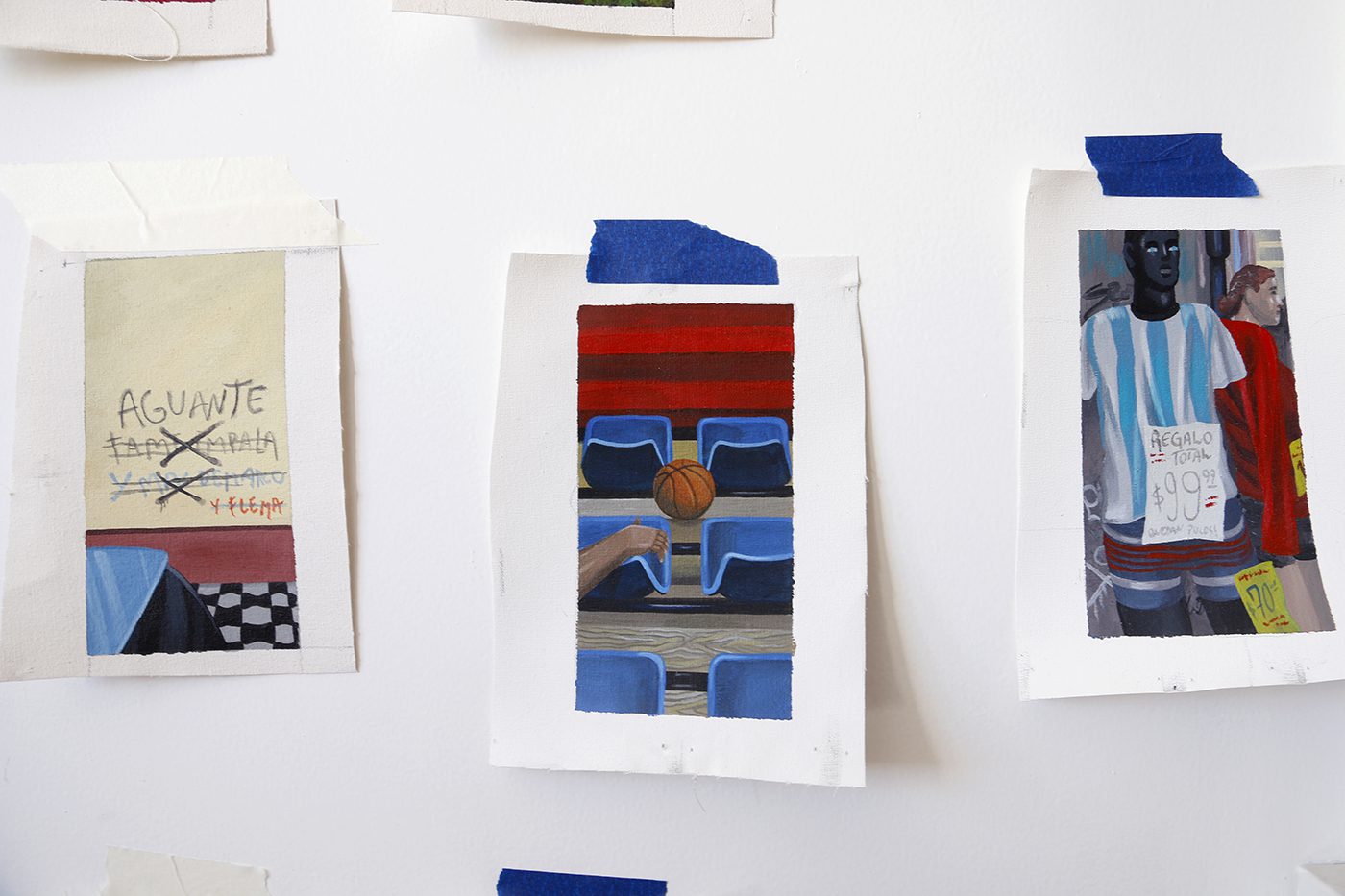 «In this last period I realized that I had squeezed out quite a lot my work on amateur soccer. It’s what I had been doing for a long time and I felt exhausted from painting it. At the same time I was realizing that I was spending more and more time using the phone, I guess like everybody else. You want to look for an old photo and you find so much content that’s in the cell phone just going around, you feel like diving into a digital file that can take you straight into your head, the places you’ve seen, remember where you were, how you were feeling… And that translated into images. I wanted to do something with that and what started as a joke has continued. In this latest work hanging on the wall you can see several of these works: a hat on a trophy, a melancholic ball at Deportivo de Viedma’s court, a wall painted at Viedma’s Downtown that said ‘Aguante Tame Impala’, a mannequin with a 90 peso t-shirt, which is a few cents of a dollar, a house that was built near here and that simulated Titanic’s bow with a Jack and Rose sculpture… All these works would go La Causa Galería in Madrid for my first solo show in Europe». 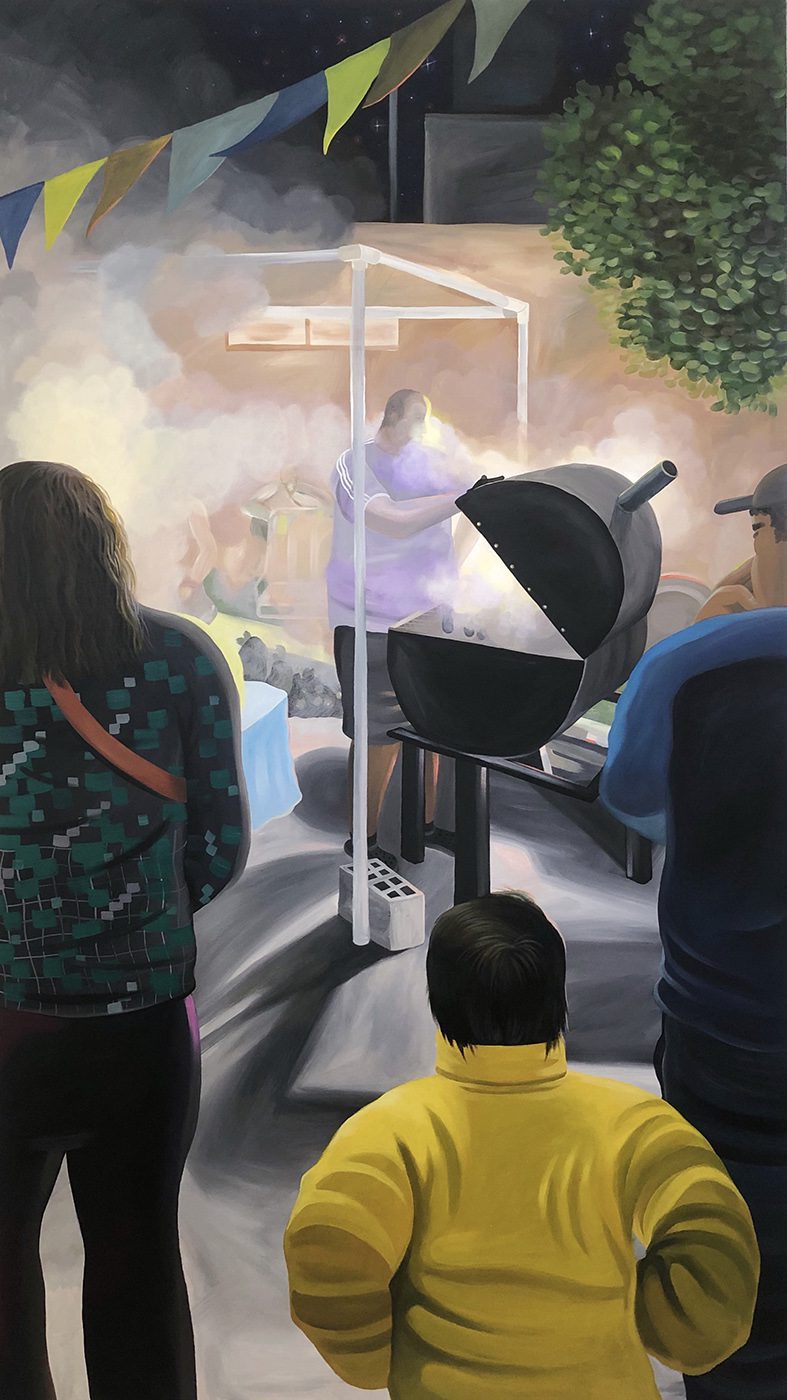 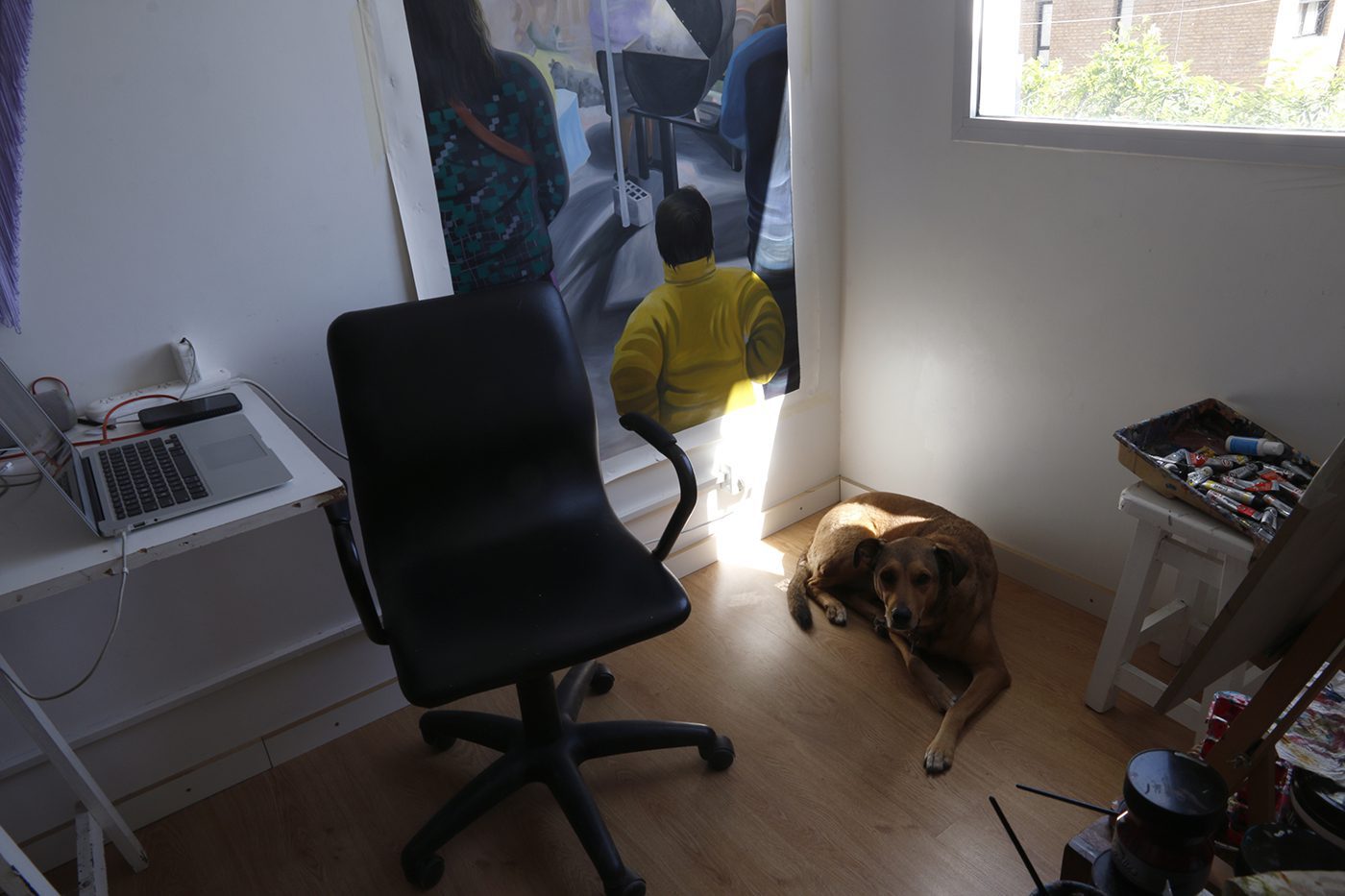 «This is one of the last pieces I’m working on from this new series of photos I’ve taken. I would say it’s done. I took the picture at a popular party, Fiesta del Río, there’s ‘asados’ everywhere. I loved this character, opening his ‘chulengo’, these barrels cut in half to make a BBQ, and the light that came out with the smoke seemed to transport him to another dimension, I liked that image. At the moment I’m participating in a collective exhibition at Mana Contemporary in New Jersey curated by Eduardo Monti, I had planned an artistic residency there and because of Covid it had to be cancelled but the exhibition kept on. Let’s hope that the plans for 2021 in Madrid can go ahead».