Grip Face: a personal tour through his latest exhibition 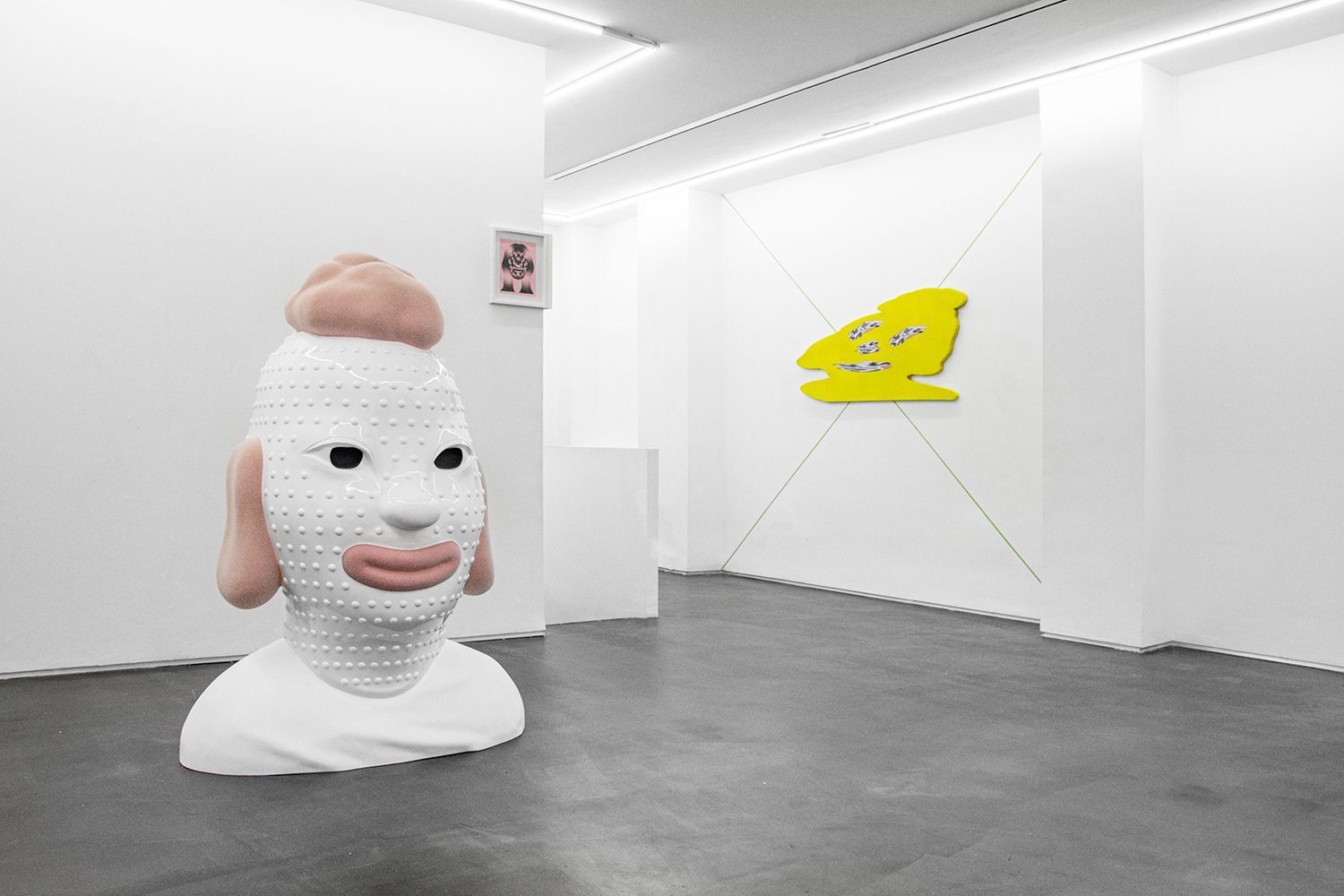 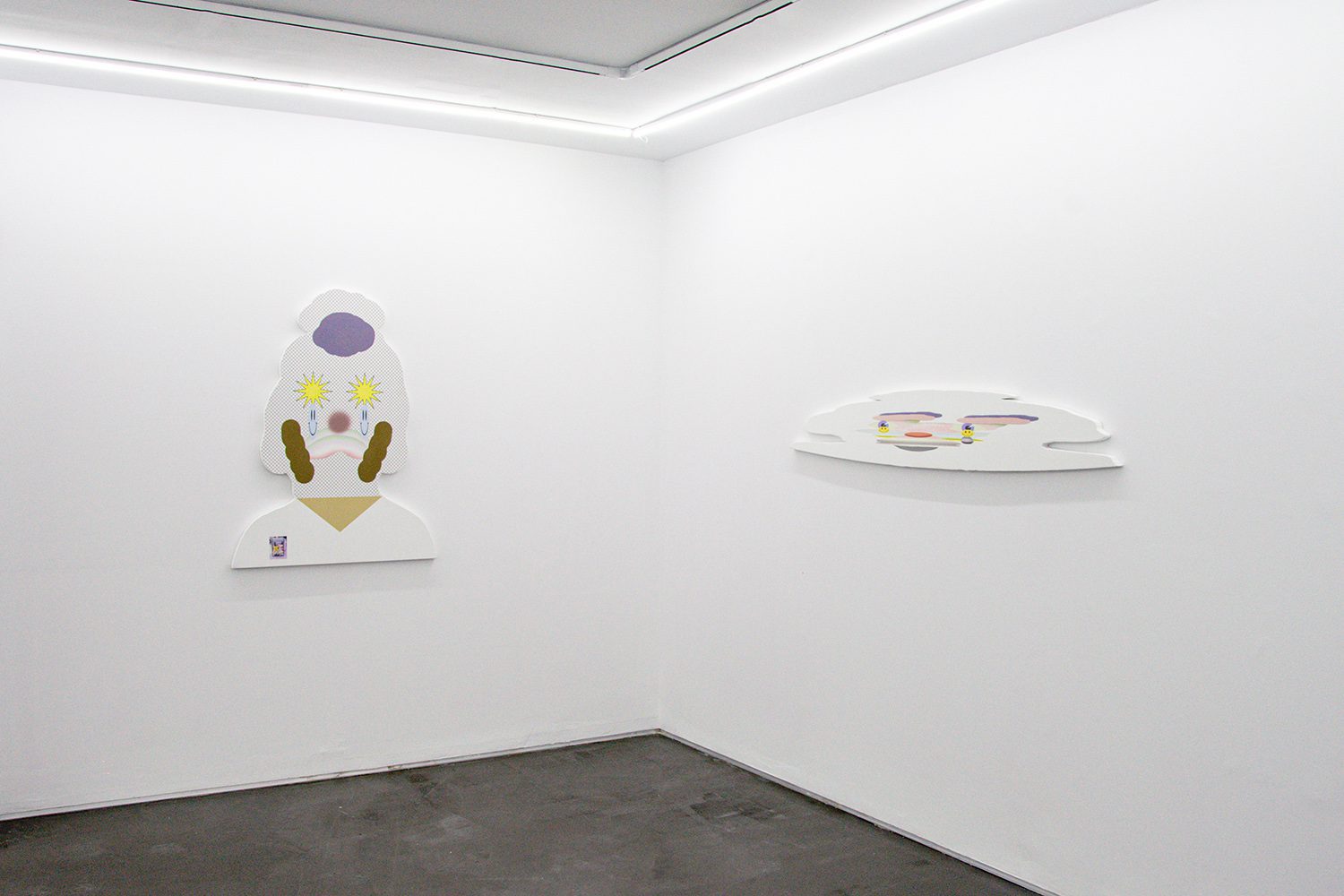 “Masks of a Millennial Generation” by the Majorcan artist Grip Face (Palma de Mallorca, 1989) was inaugurated at the Cerquone Gallery in Madrid last November 19. An evolution of the work in which he has been immersed for the last six years around the face and its complexion: «I have encompassed this project around four key concepts: the study of the image, the polarization at a plastic level, which emphasizes social polarization, the generational topic also brought to a plastic level and from a bitter point of view and finally the theme of the face», says Grip Face. Four areas that actually work in the gallery space interconnected with each other and were brought together from a unique silhouette that thanks to new media and industrial techniques the artist deforms, manipulates and distorts visually playing with the expression of the Millennial generation from a conceptual point of view. In this last work, Grip Face debuts with volumetric work, with sculpture, opening a new stage in which he moves from working with sculpture as part of an installation to turn it into a unique object. «I feel quite comfortable with volume and sculpture and my next projects will go in this direction. The public intervention part, in which I have been less involved this year than in previous years, is where I want to take it and leave the plastic practice a little behind. It has been a really natural and organic process», he continues. The artist takes us on a piece by piece tour through the exhibition that can be seen until March 5, 2021. 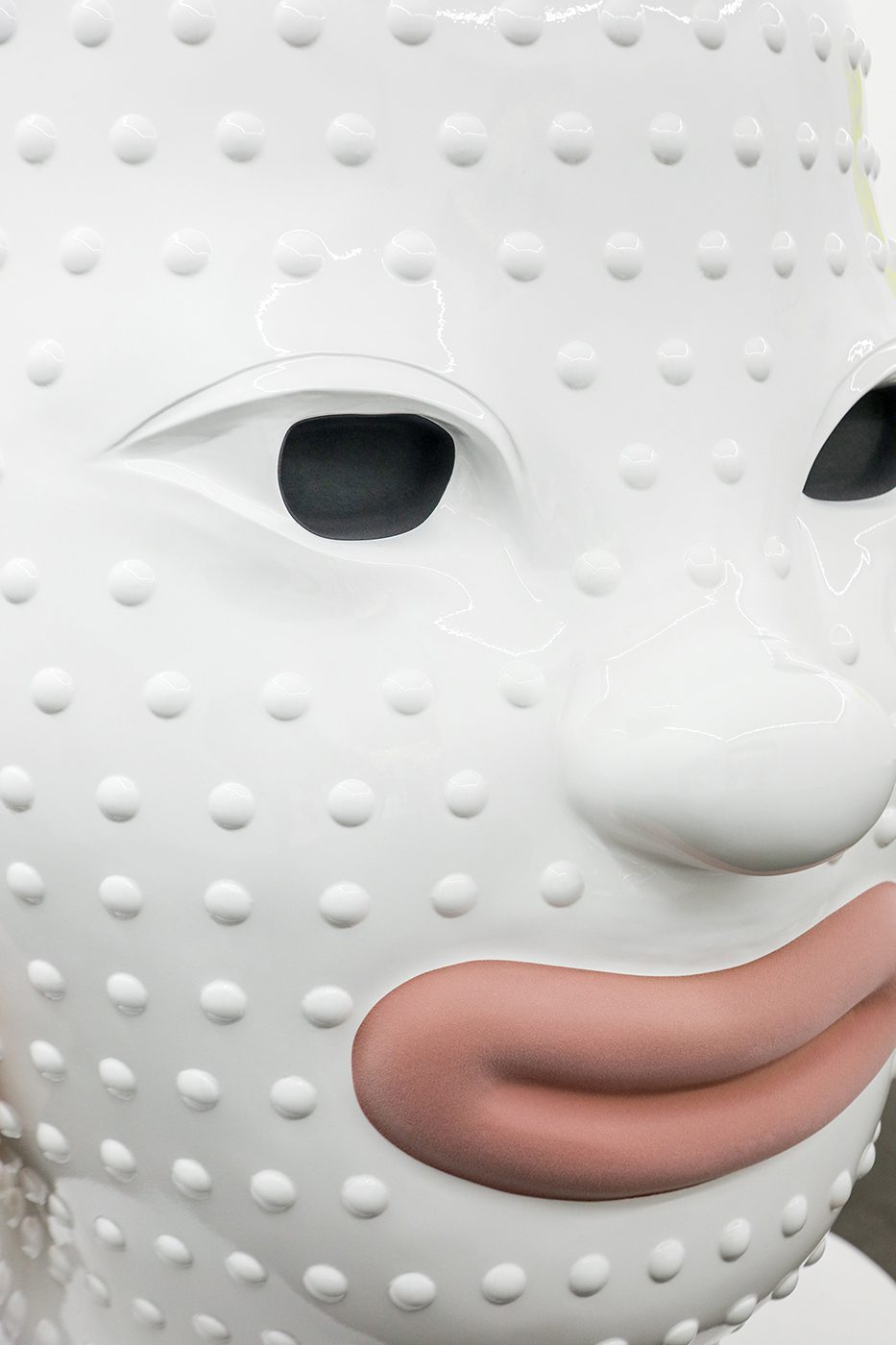 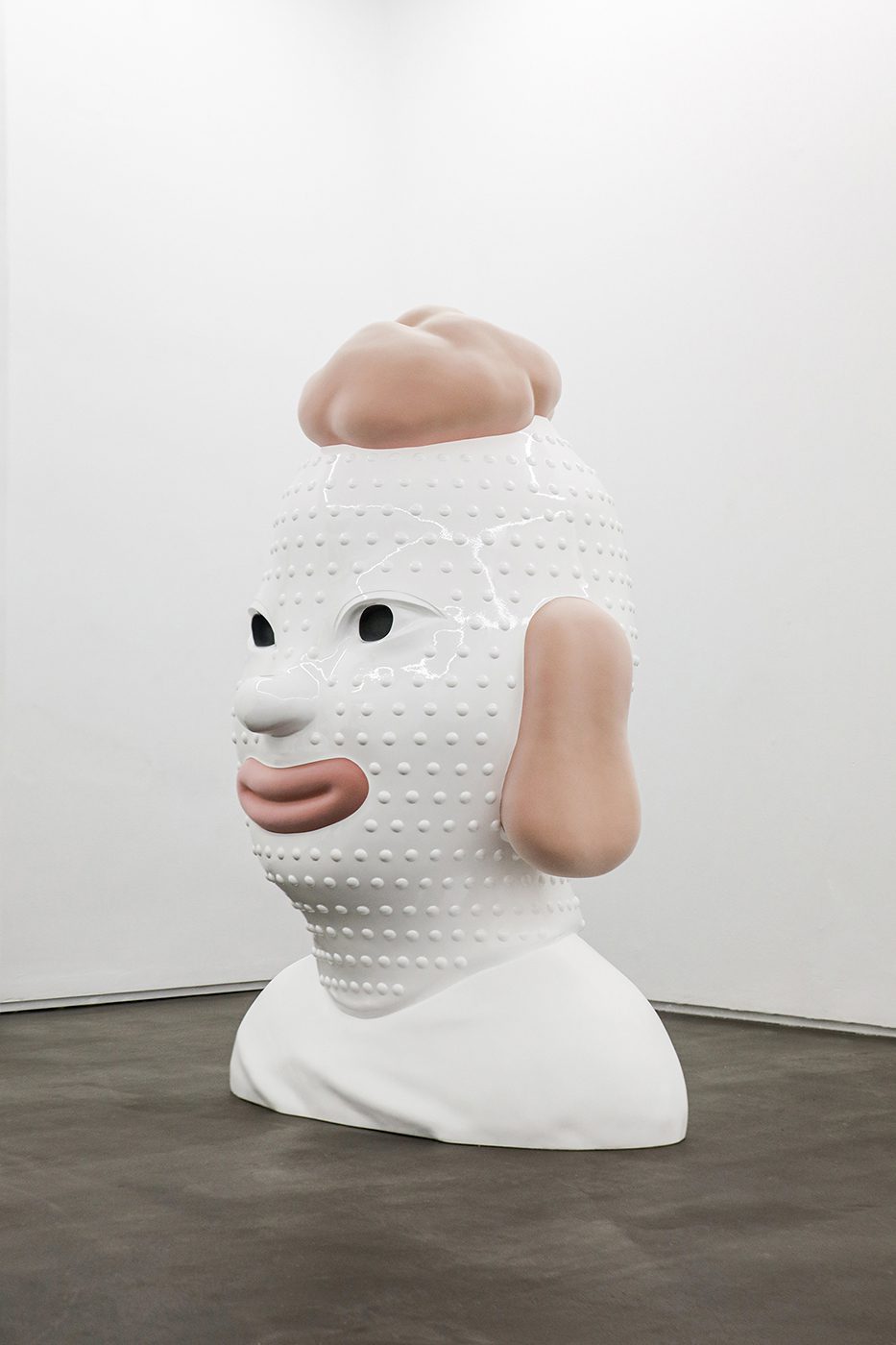 «This is the main piece of the exhibition, everything revolves around it and it is the one that maintains the balance of the space. I believe that one of my strengths is precisely that handling of space and for me it is the most important thing. This sculpture was born from a 2D piece [picture below], which is the main silhouette and has the same shape when you see it from the front as this sculpture. Let’s say that this sculpture is the latest evolution of the silhouette in a volumetric format. It represents the portrait of our generation, of the its actual state, that bitter, almost bittersweet gesture… It looks like a pressure mask with a very neutral but balanced color tone. For me this piece is the one that portrays this millennial generation. The parts in pink are the only ones that are more human. I wanted to use that meaty velvet fabric to remember that the piece is alive and that behind that aseptic, white mask with a noble porcelain finish are those more mundane parts, the skin. It is as if the piece is pressed and that flesh has to come out somewhere upwards. My intention was to get that balance between a raw and a naive aspect». 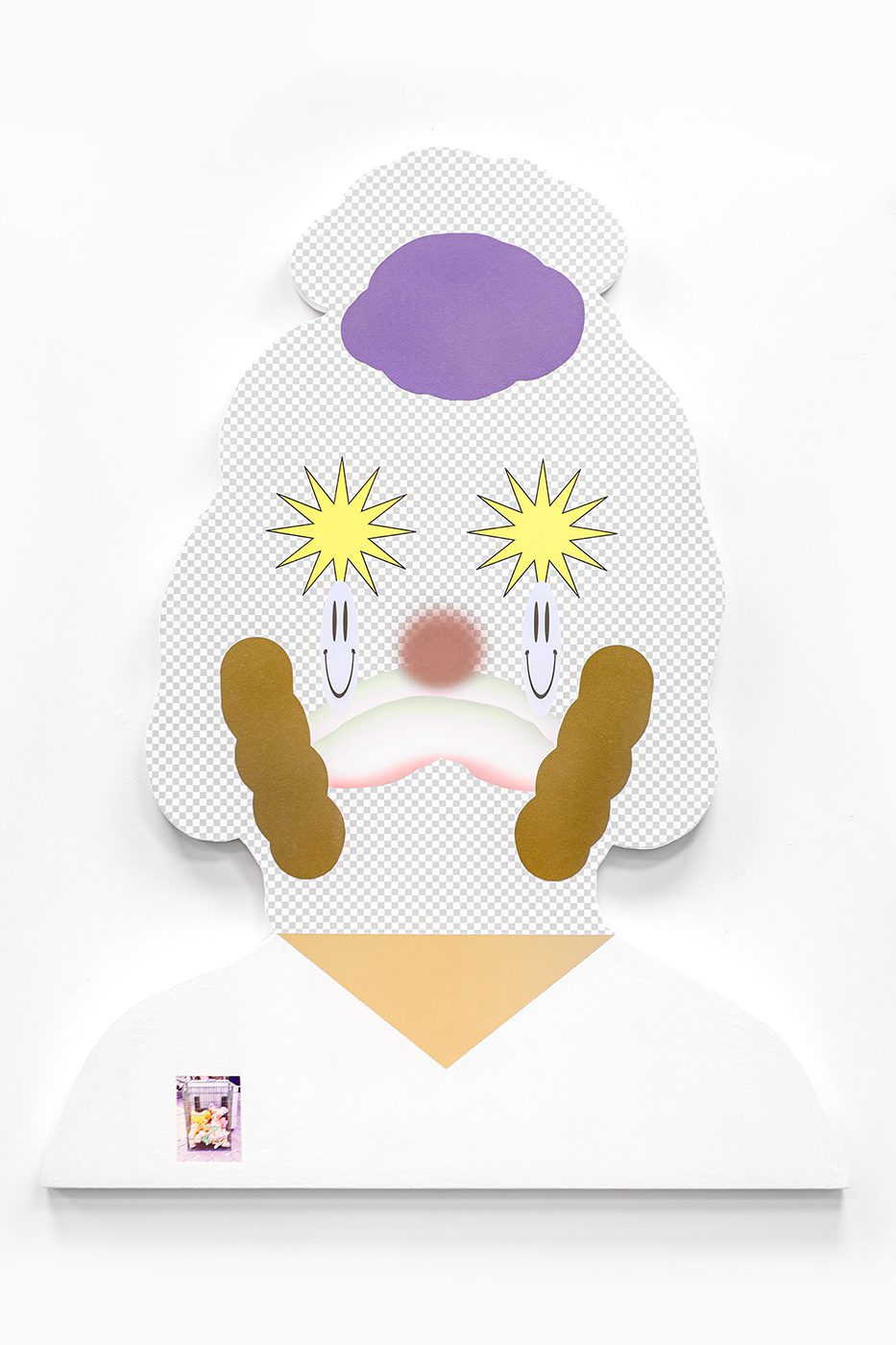 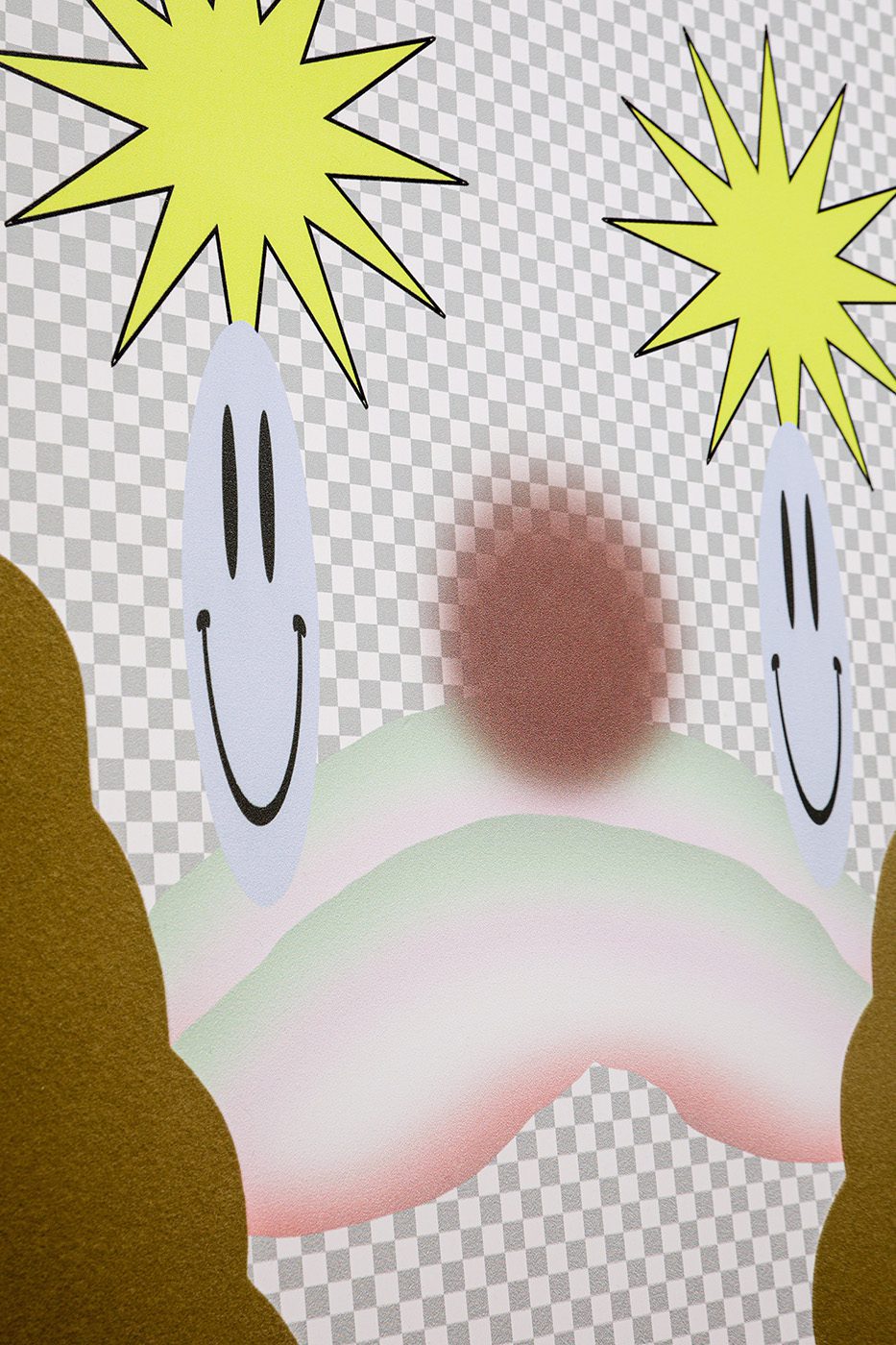 «The four pieces that are hung on the wall in 2D are, like the previous one, the study of the same image that starts from a flat bust format that then gets deformed. It has four different deformations appearing elements that represent new faces. It’s a study of image on image, as happens today in virtual life in which we are presented with many images and information to the point that you really do not see anything accurate and you are confused between an image and another. I wanted to put it this way, pieces that are very confusing but that generate a lot of information and that you really have to observe several times. It’s a visual scrolling game». 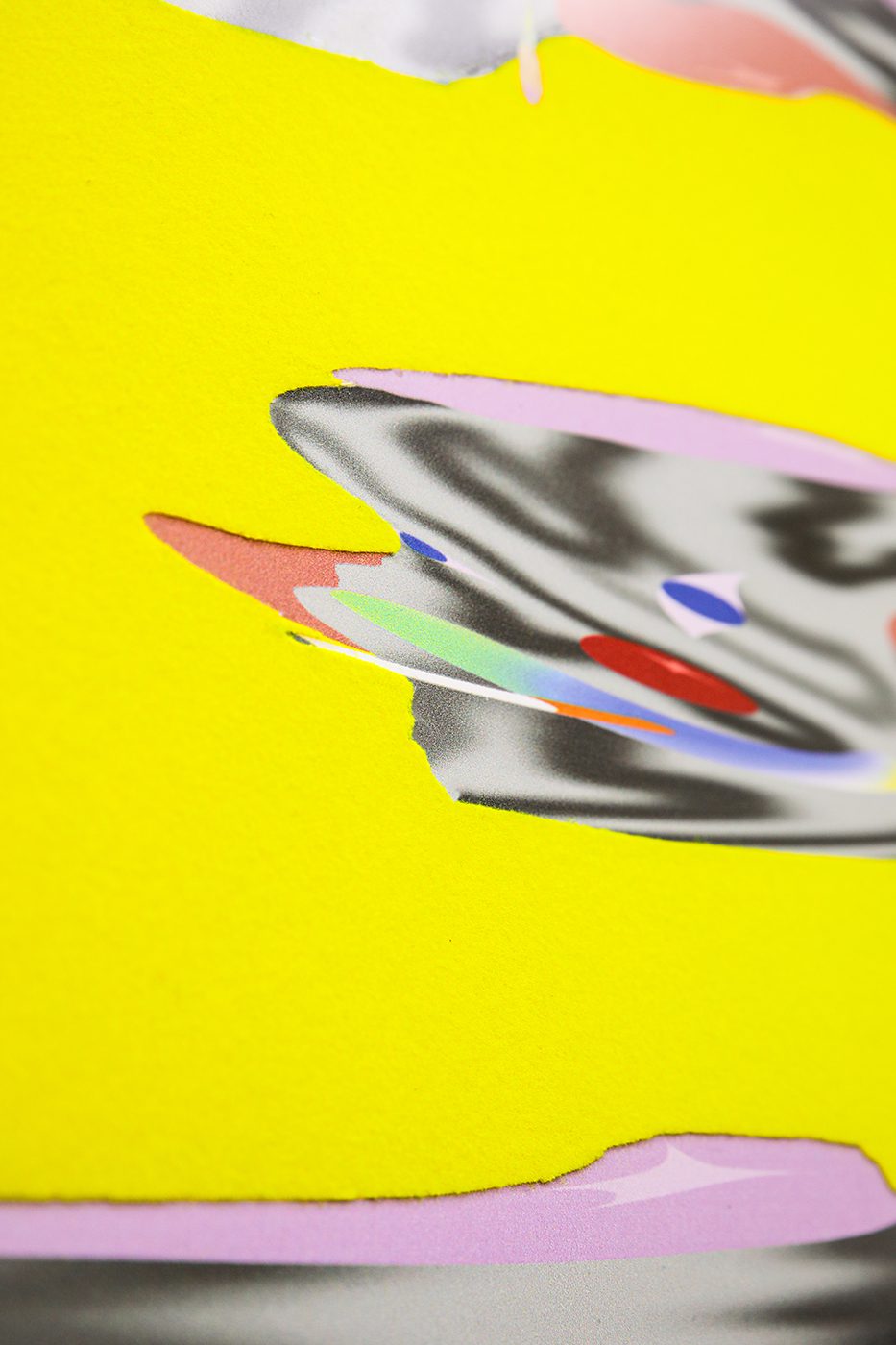 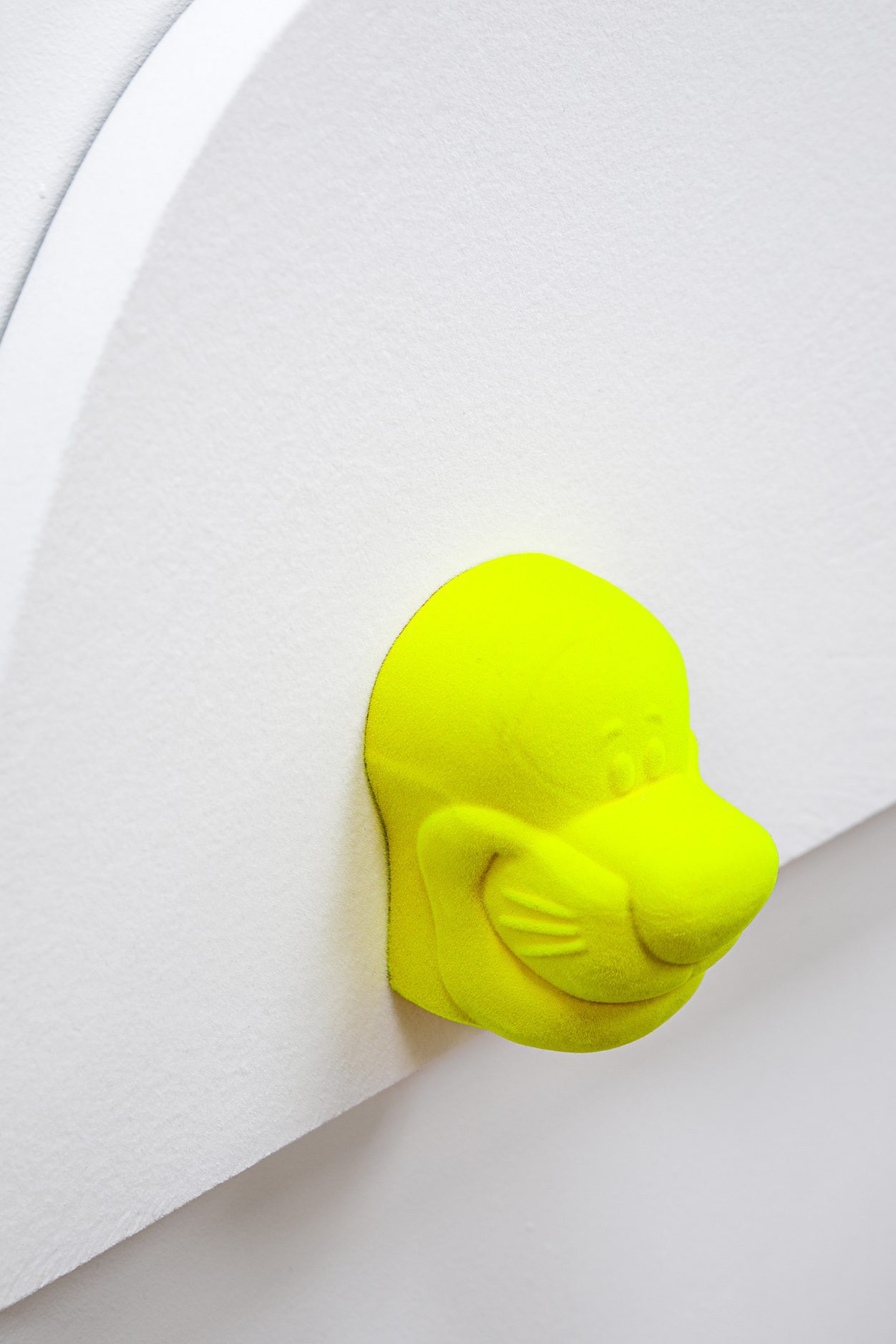 «Actually these four pieces could be called non-paintings because they are made with technological materials and it’s the first time I work a complete piece in a purely industrial way: injected velvet, OV printing, types of plastic resin, industrial epoxies… I wanted to find that conflict in-between the meaty industrial work and the handmade drawing pieces. They are the two opposite ends, polarized but occupying the same space. I’ve been quite interested in industrial materials for some time, and especially in those that do not represent a noble material for visual art. I have been introducing into it myself thanks to colleagues who work in the industrial world in this other branch. I like to be in constant evolution, to investigate and to scape from my comfort zone». 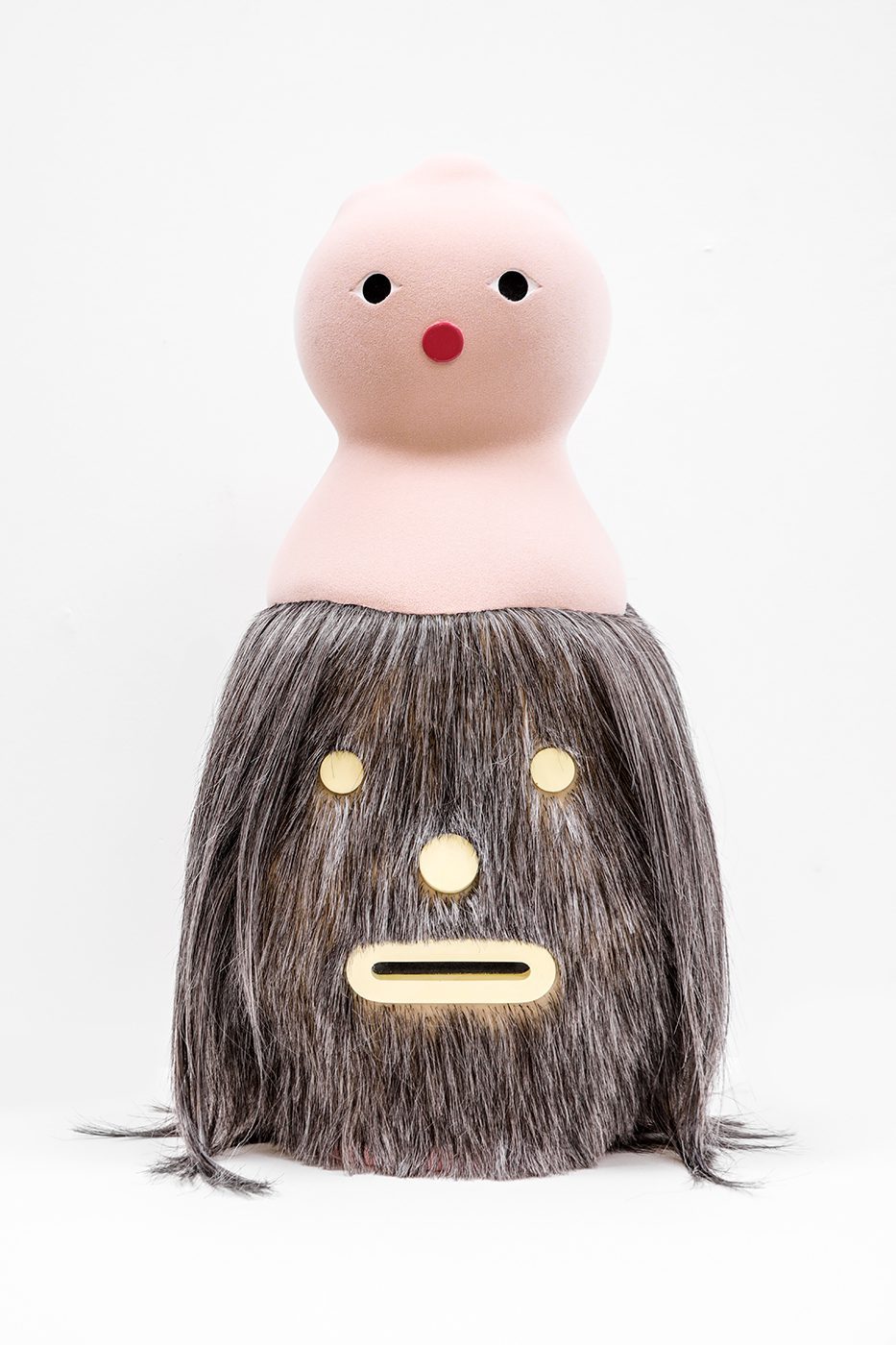 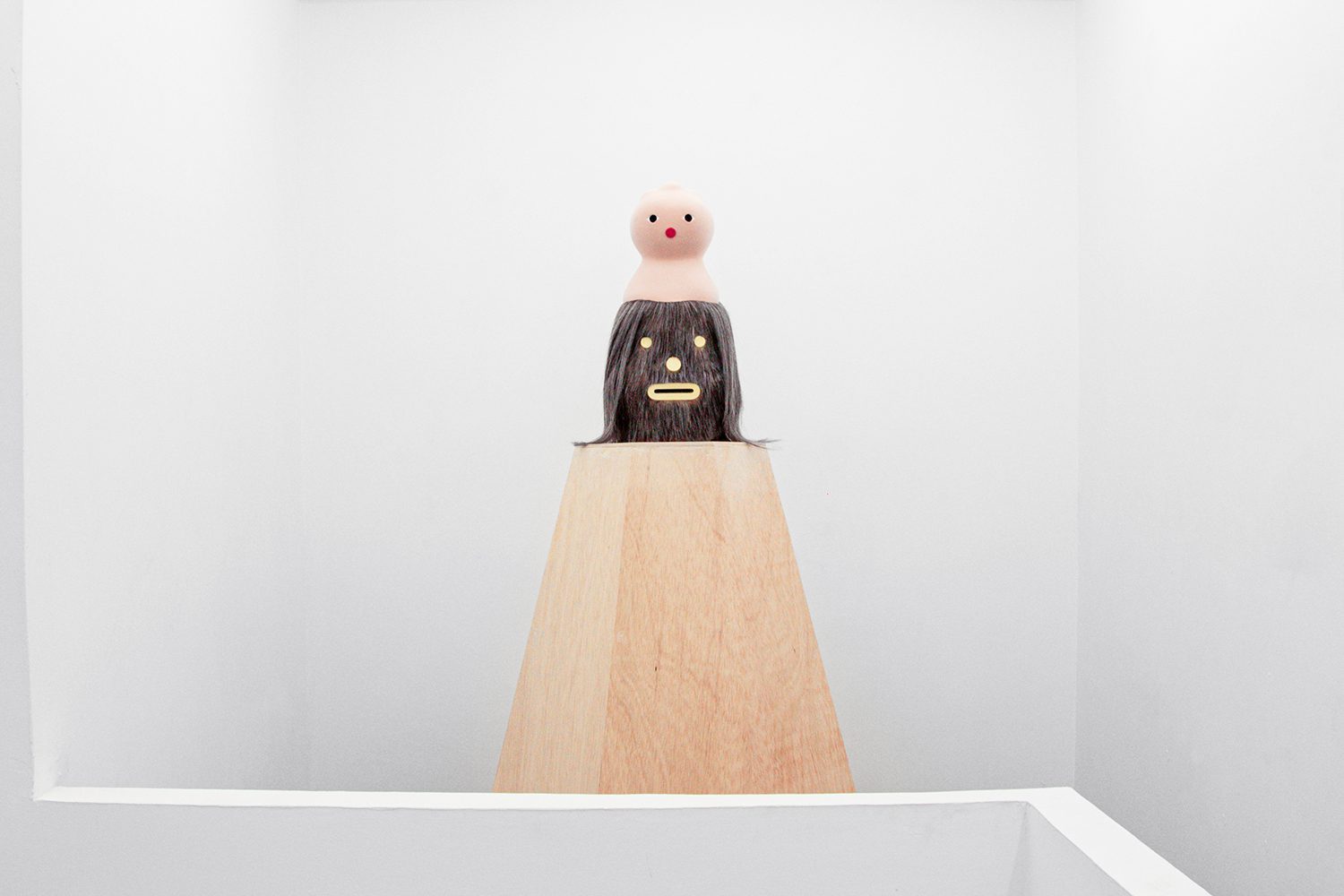 «The large central sculpture forms my work in new technologies, even though it is a volumetric piece, a sculpture that seems to have a very classical presence, in reality it is largely made with new media. That’s where it comes into conflict with this hair sculpture, I wanted this to be another of the clashes of polarization. It’s like a piece that reminds me of my most primitive, most tribal busts and masks. The hair appears for the first time in my work as something tangible, when before it had always been something flat. It is really the second mask that represents the generational part and through these two heads, one on top of the other, I represent in the hairy one a more bittersweet gesture, with a grayish hair and the piece above an abstract face but with a very innocent and subtle look, which generates us with its contrast a conflict again. From my point of view it is the most interesting piece, it was a dense process, I had to inject 1,500 hairs one by one with the manual technique of injection over silicone, it was quite laborious!». 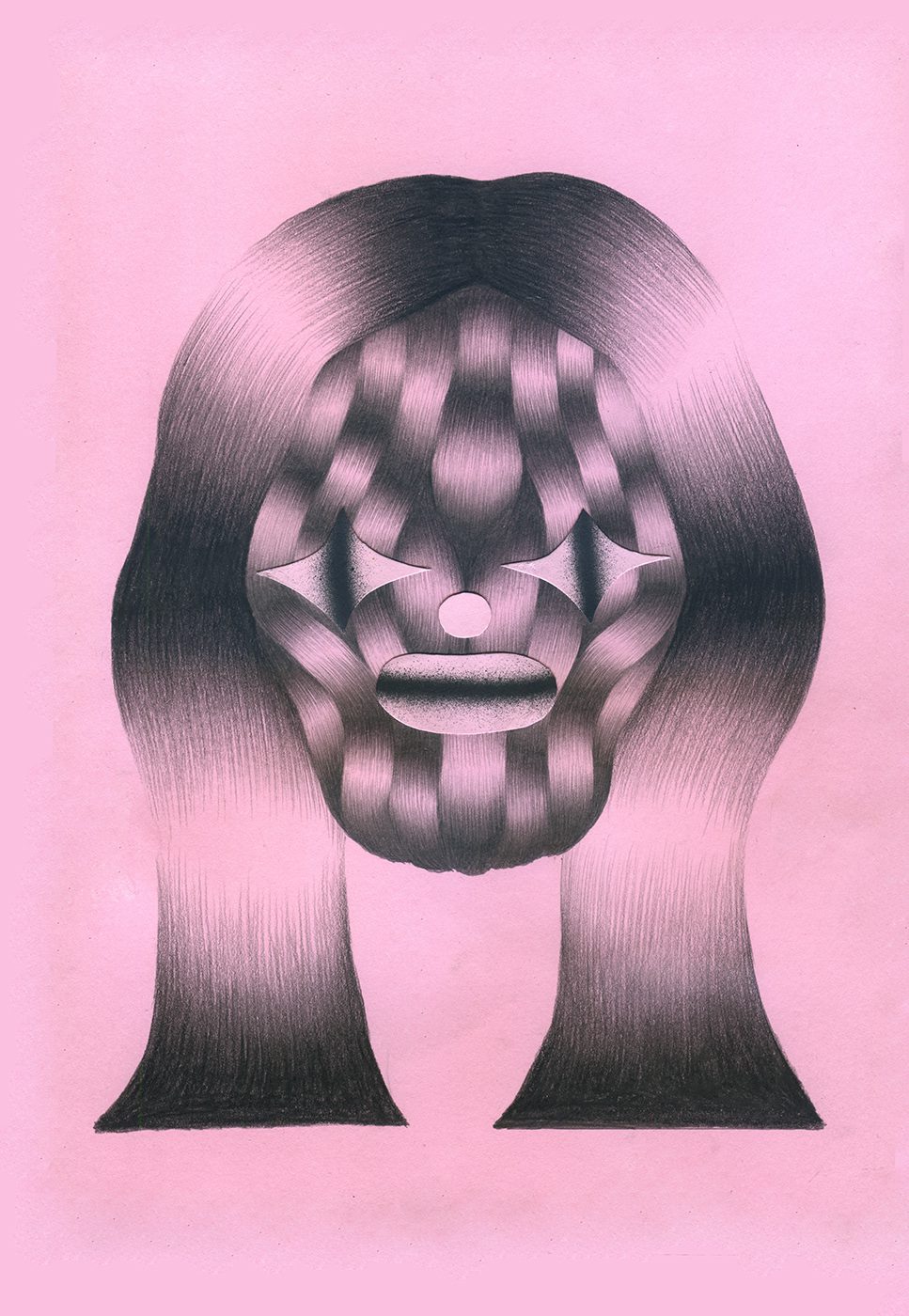 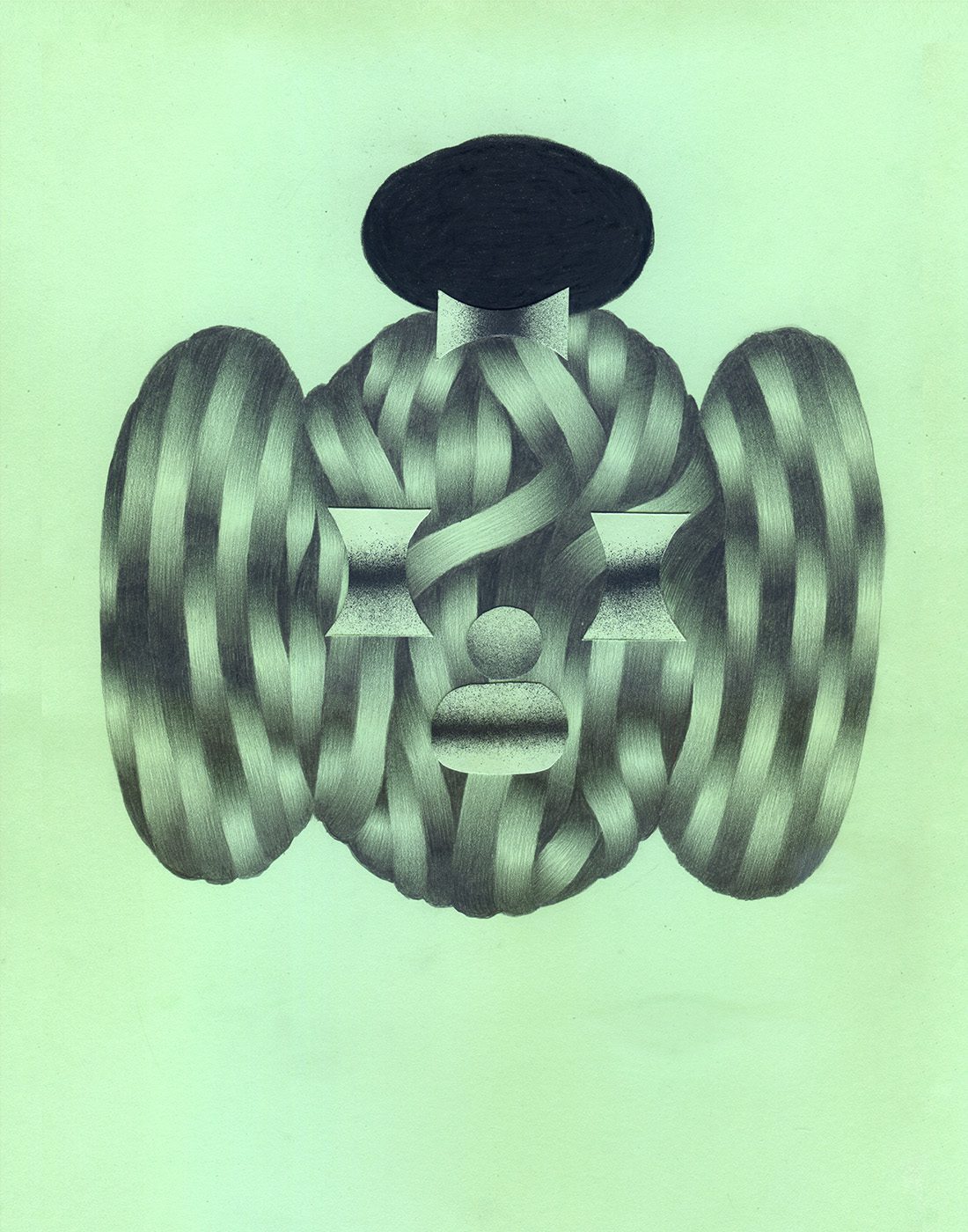 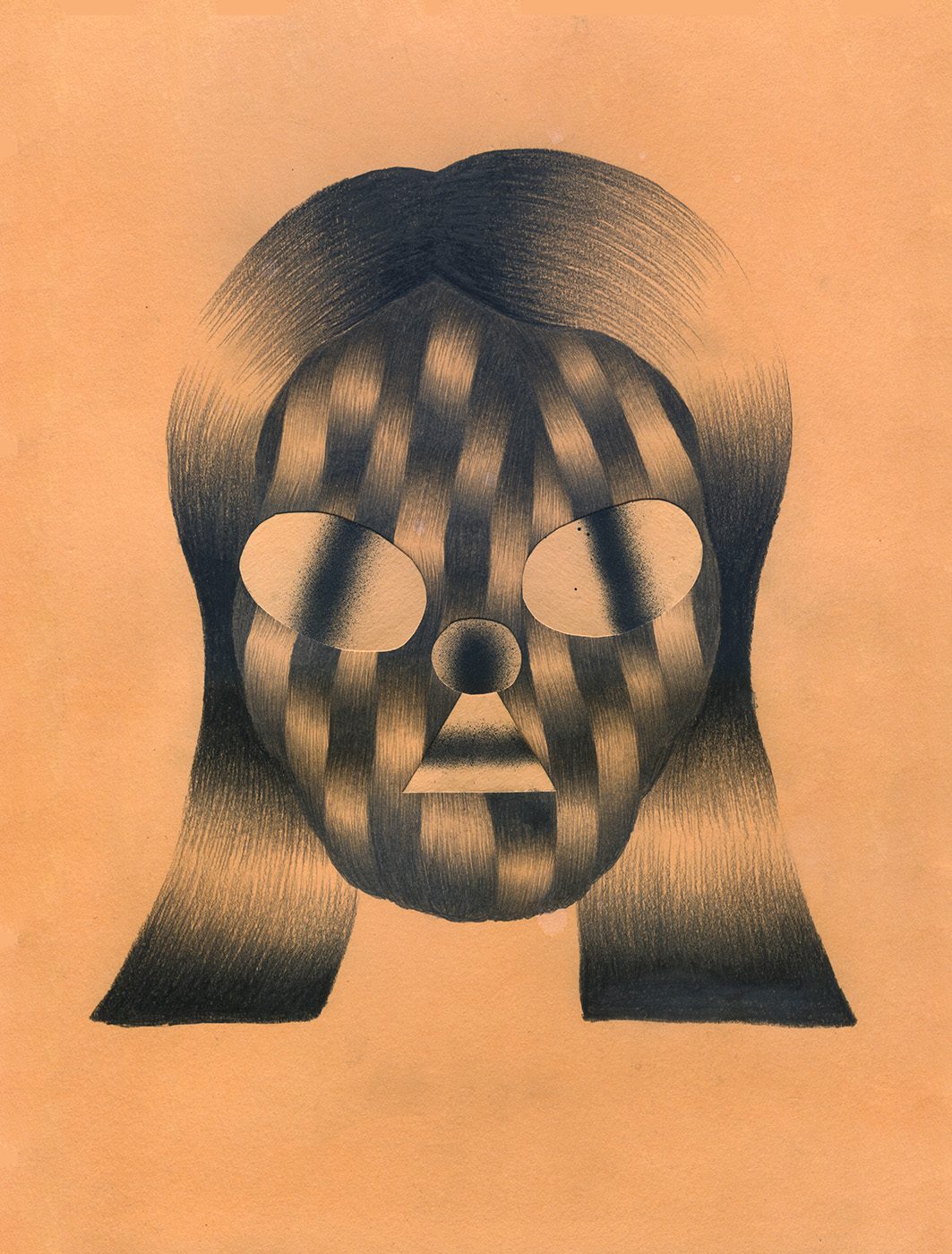 «I took up this series again in early 2020. It had been almost 10 years since I last exhibited drawings in their rawest material, which is pencil. It fitted in very well with the project, generating a dialogue between my most ‘retro’ or primitive work with the newest and most modern. They are representative pieces, because they are very abstract faces but they enter into a game of balance with the fabrics, the hair, the shape… They are a little darker than what we find in the rest of the exhibition but they form a crucial part. These drawings are the most introspective part of my work, they are drawings that I usually do in my diaries, in my notebooks… And these are out of people’s reach, I don’t publish them or show them, they are really very ‘outsider’ drawings. I want to go back to that primitive work with pencil during these years, lets see how far it takes me».