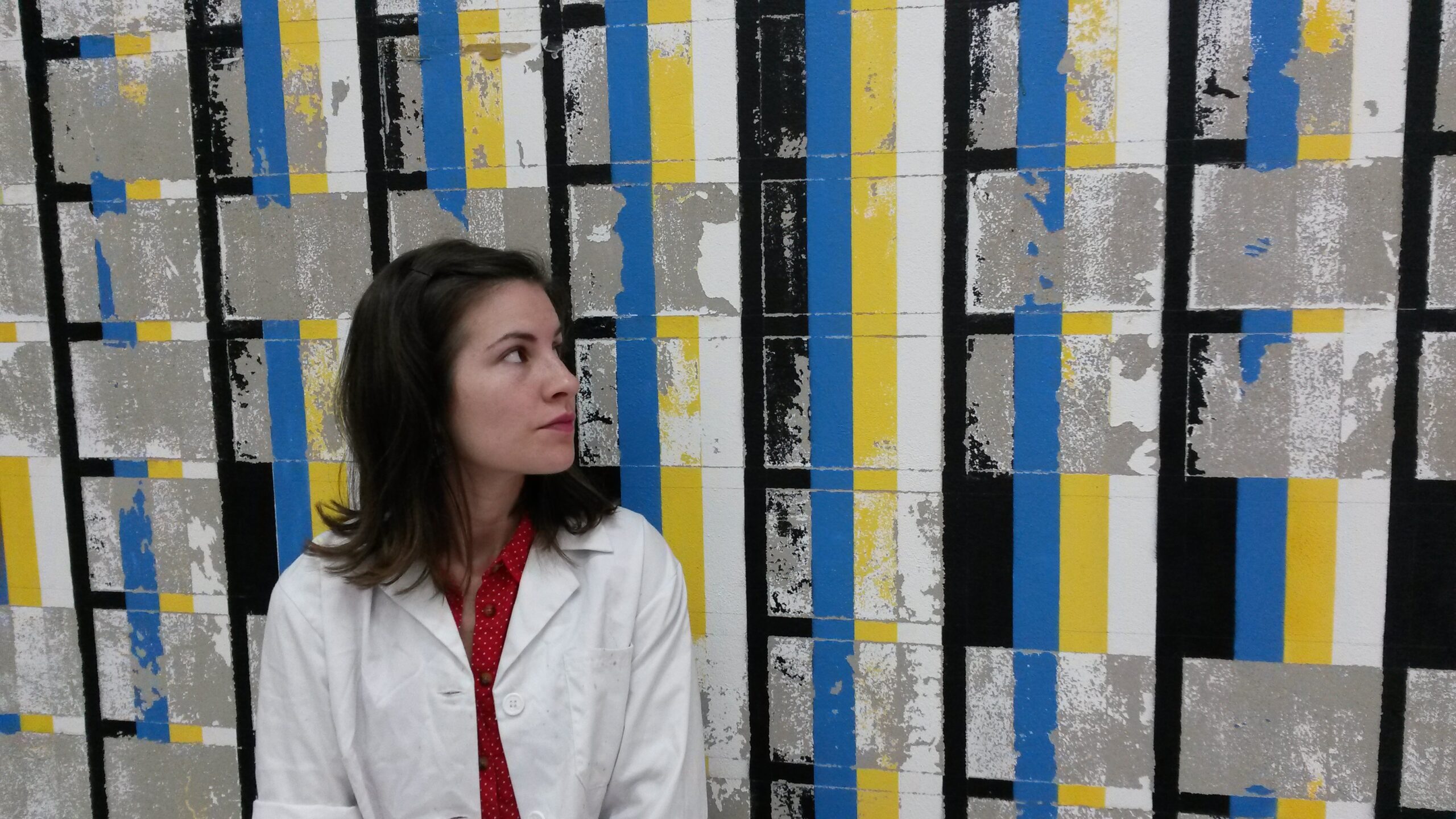 Have you ever wondered how to preserve the ephemeral?

Although they are apparently two antagonistic concepts, Rita L. Amor, PhD in Science and Restoration of Historical and Artistic Heritage, illustrates in this interview the role of the conservator – restorer in the context of street art.

Expert in the application of conservation mechanisms on independent public and street art, she unravels the preconceived union between vandalism and street art. We talk about the importance of documentation and the artist’s interview, which she establishes as an essential element in her work. We delve into the controversy of the musealisation of this type of artistic production, as well as the use of appropriate materials and whether or not there is conservation awareness among artists. An interview that shows us the – unknown to many – world of conservation and restoration, where Rita also provides us with a series of tips for artists working in this field.

From a conservator / restorer’s point of view, where does one draw the line between vandalism and art in the urban context?

At a general level, it is situated in the degradation of a work or heritage object through the intervention of an external individual or collective. On a personal level, I have always considered that, in order to identify any action as vandalism, it must have been done with the idea of destroying, but it can also have been done out of ignorance; although there are always exceptions to everything.

From my experience I know that many street artists and graffiti writers know that the supports or spaces that have certain value (artistic, historical, social) are not valid supports to intervene, since their intervention would produce damage (often irreversible) on that first work and they want to show respect for the creations of others.

I am a strong advocate that conservators, as well as other heritage professionals, should be open to explain these issues to artists in any field, not to limit the spaces for intervention, but to explain the consequences of an intervention on the work of another or heritage object, as perhaps, in that way, we can avoid a recurrence. 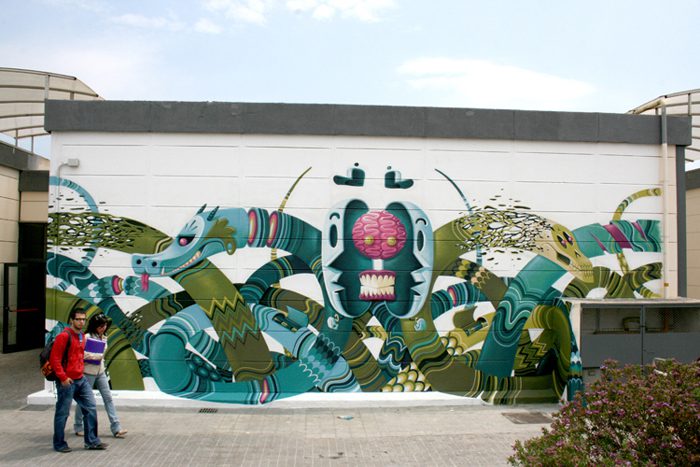 Kram at the Poliniza Festival 2010 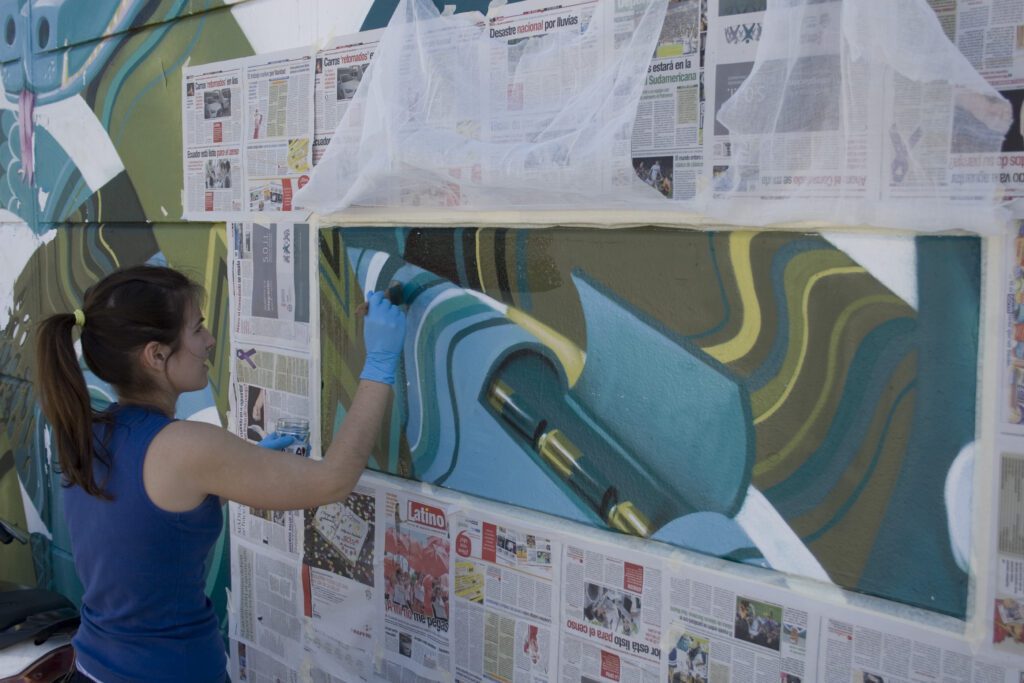 Most street art production is ephemeral art, destined to be lost. What role does the documentation of art works, such as through photographic recordings, play in their conservation?

For conservators, it is not what role documentation plays in conservation in cases of ephemeral works, it is that documentation is the only applicable, respectful means for the artist who decides that his work is ephemeral. It is the way that will allow the public to appreciate the work, professionals to study it, as well as increase its dissemination beyond the space where it was created.

As long as the artist agrees to have it documented; visual and written documentation is everything, it is the work that remains, the only trace – the intangible conservation. The indispensable tool and the best way to maintain and disseminate ideas that are no longer present in tangible form.

We know that the main criterion in the conservation and restoration of contemporary art is respect for the will and word of the artist, so at what point is the figure of the conservator independent, in other words, can they apply the current criteria freely, taking into account the will of the artist?

Establishing good communication with the artist is always advisable when intervening on the work of a contemporary artist. It is true that this is not always possible, so in cases of alterations linked to the structure and aesthetics of the work that require non-permanent or reversible treatments, conservators can work within ethical conservative parameters, after having studied the artist’s work. Similarly, in situations of uncertainty, where several options are possible or when it is unknown whether the treatment is safe or respectful of the work, the artist or his legacy will always be contacted. 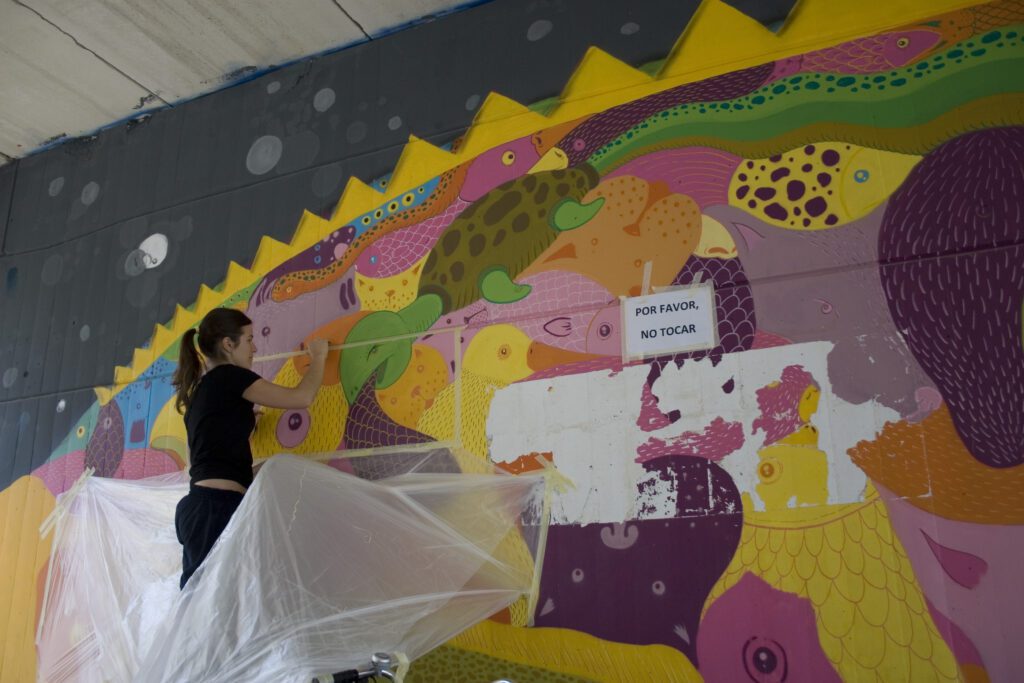 Intervention on a mural 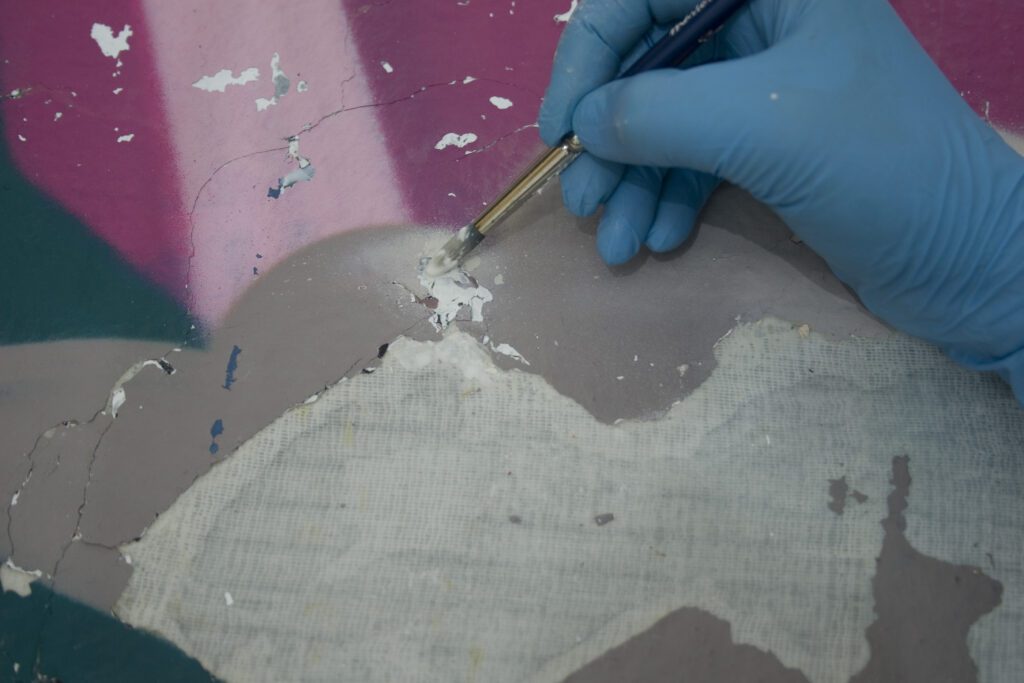 Stuccoing of losses on a spray-painted mural

What role does the interview with the artist play in the conservation of the work? Do you think it should always be necessary to conduct an interview to record the artist’s will for the work?

The artist interview is an irreplaceable and always necessary tool. It gathers information that is impossible to obtain by other means and complements possible studies in more scientific branches of conservation. Thanks to the interview, the conservator will not only know whether the artist expected his work to be preserved and at what level; but will also identify material aspects, problems and issues linked to the creation that can benefit the application of a decision-making model and specific treatments adapted 100% to the needs of the work.

I believe that the artist interview and its progression throughout an artist’s career is essential to know how a work should or is expected to be preserved. It also allows us to show constant support before, during and after the creative process. It is therefore always an effective and necessary tool for the understanding and conservation of any artist’s work. 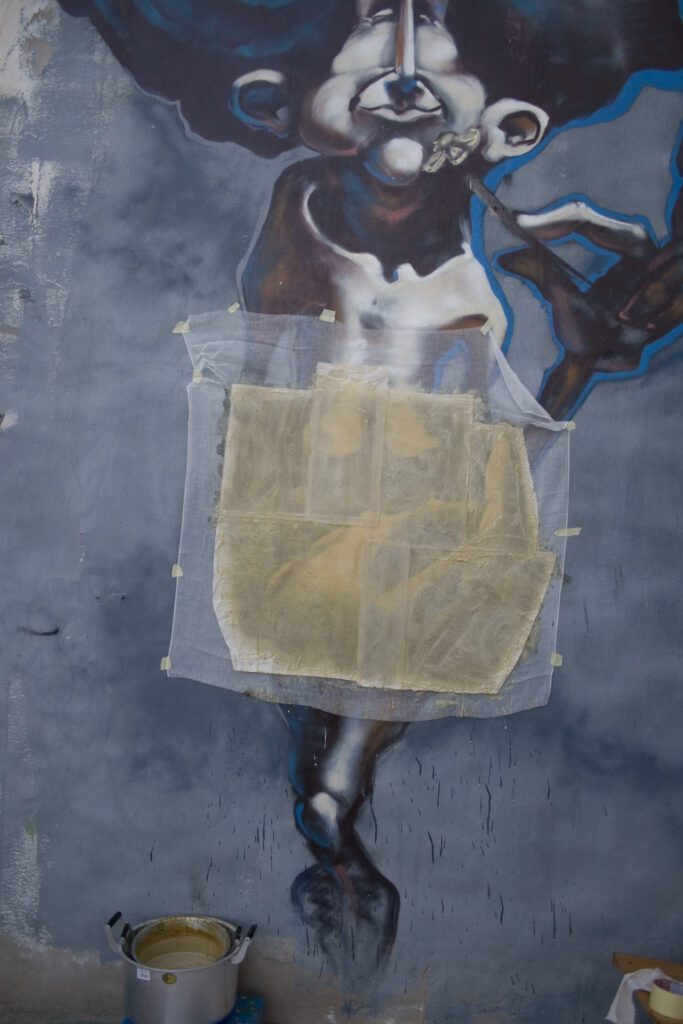 Do you think there is any kind of awareness among artists about the type of material they use for their works and its importance in their conservation?

It depends on the artist and the moment in their career, as well as the type of intervention.

When I first started researching graffiti and street art conservation, the artists I interviewed always said that they used lower quality paints for spaces where the work would not last, and higher quality paints for larger productions or commissions. Over the years, I have seen many of these same artists progress in their practice by using higher quality paints without distinction, simply because the results were going to be better. However, I have also seen studio works in which incompatible materials have been used, of very poor quality and/or that could have been substituted with less problematic ones. When this happens, in most cases it is very close to the creation of the work, so it is often a matter of trial and error, of seeing what might be going wrong, of asking a conservator, another artist or the manufacturer or seller of those materials, to see how to avoid damage.

I am positive that there is an awareness in the use of precise materials for each work, which is not always applied, and in many cases is still awakening but is gradually improving. 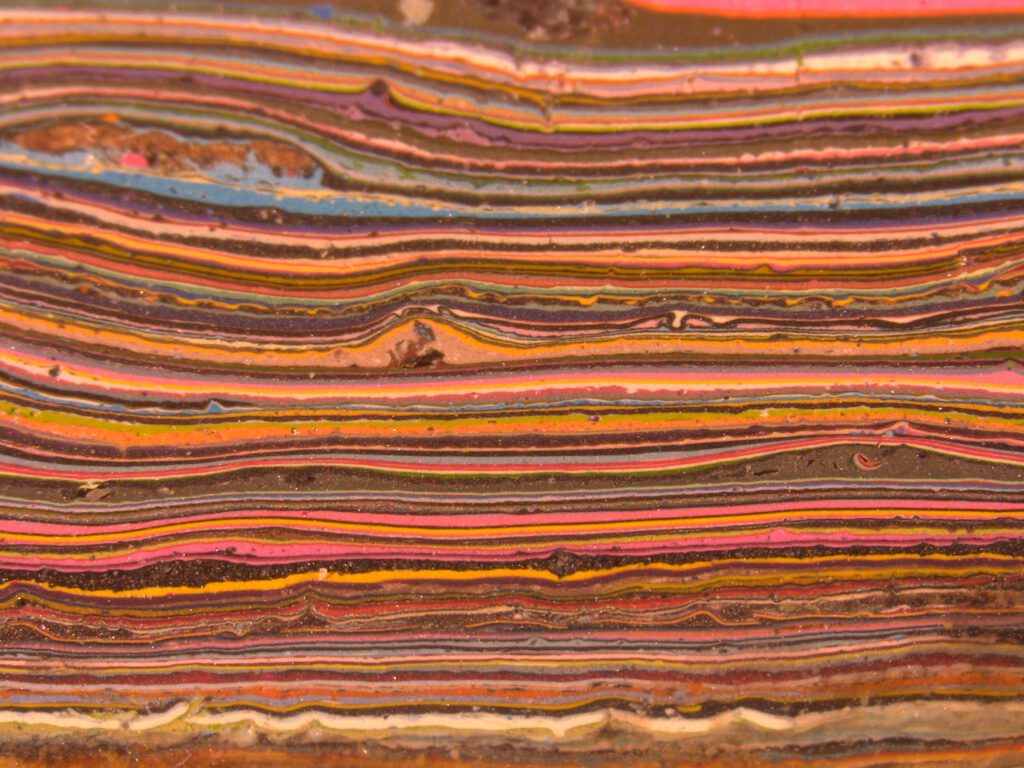 Bearing in mind that “musealisation” does not imply introducing the work into a building, but rather giving it context, what options do you think there are for the “musealisation” of street art?

From social networks and the publication of an artist’s works on their own profile, the compilation of images in digital galleries with a common theme, the regeneration of spaces for artistic practice in an organised or freeway and the celebration of events linked to graffiti and street art, as well as the pseudo-organised tours and outings carried out by experts in independent art practices and artists offered to the general public…

Any action that involves encouraging the dissemination and appreciation of works linked to street art at any level can be considered as a form of “musealisation”; not with the intention of turning the pieces into permanent “museum objects” and exhibiting them out of context, but to preserve their practice and allow it to continue in non-traditional exhibition spaces with a proper contextualisation.

Have you ever found yourself in the position of having to preserve an artwork because of its importance in its own context and that, due to the artist himself, it has not been possible?

No, generally if the work acquires social recognition beyond the one given by the artist, the same artist usually accepts these changes, even if its work was originally conceived in an ephemeral or constantly evolving way.

In street art, artworks evolve, but they also interact with the public, and often that interaction and how the message reaches the receiver goes beyond the idea conceived by the artist during its production. I am not saying that the artist’s initial idea should not be considered, but if the work has changed or evolved with the recipient, the artist should be informed, involved, and consulted.

In this way, they are presented with the changes their work has undergone, how it has been received by the community, as well as being considered in any plausible decisions to be applied to the conservation of their work at that time and for the immediate future. In the long term, the importance that the work has with society in the present may not be constant. 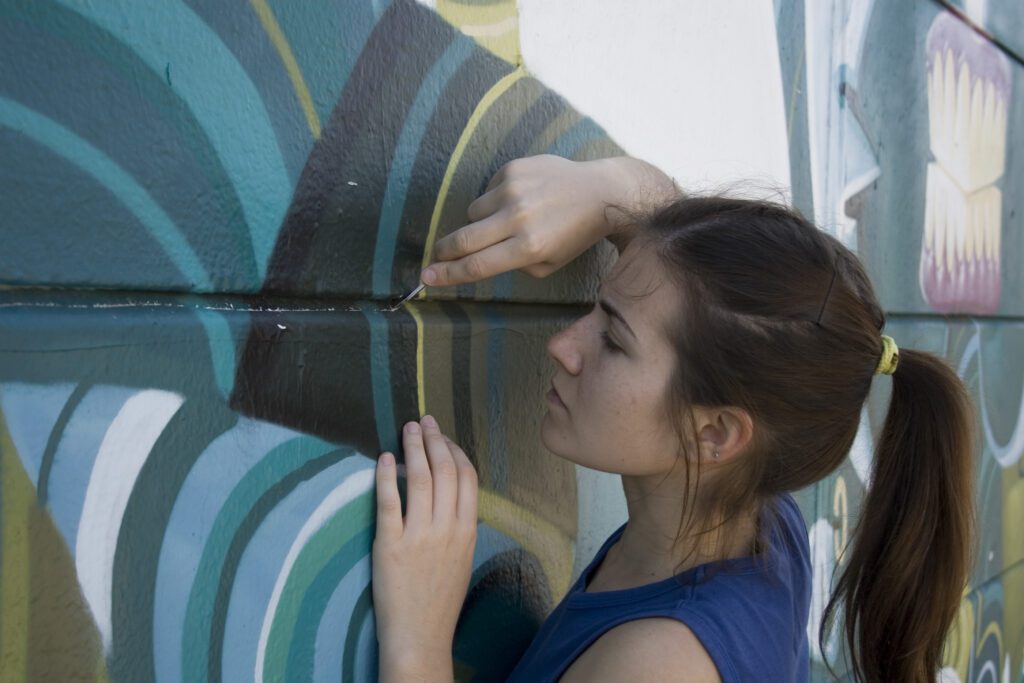 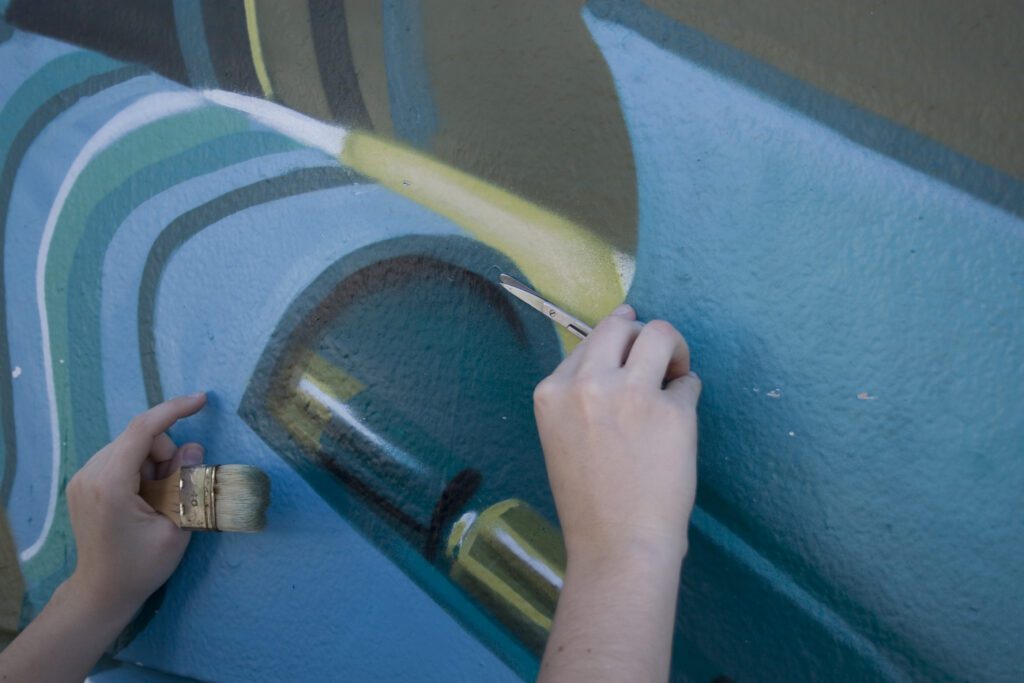 Finally, what advice would you give to artists, in terms of conservation, when intervening in public spaces?

On a general level, I would advise them to use the materials that best suit the results they are looking for, to test them depending on what they want to show and expect from the work once it has been “exhibited”. If they want the work to be maintained for a certain period of time, I recommend that they use materials that are resistant to the conditions that exist in the space where they are going to intervene.

On a particular level, this will depend on the type of work you are doing, for example, you can consider the use of varnishes on pictorial surfaces, but there are issues of the support that must also be considered. So, in case of any doubt, we conservators and other specialists are always open to help solve both particular and delicate aspects, as well as more general ones.