5 urban artists in their exploration of Land Art 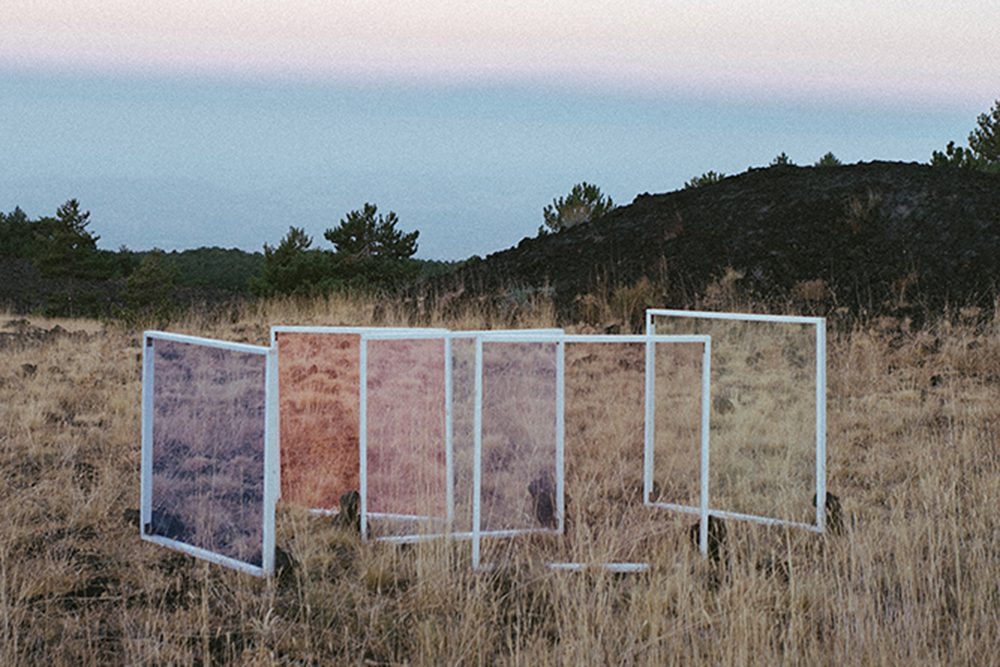 “A Contemporary Art current in which landscape and artwork are closely linked and which uses materials from nature such as wood, earth, stones, sand, rocks, fire, water… for its intervention”. This is the definition of Land Art, this artistic hybrid that mixes sculpture and landscape architecture for its public art creations. We review through this definition the works of some of our favorite urban-contemporary artists in their deeper exploration of this artistic movement. 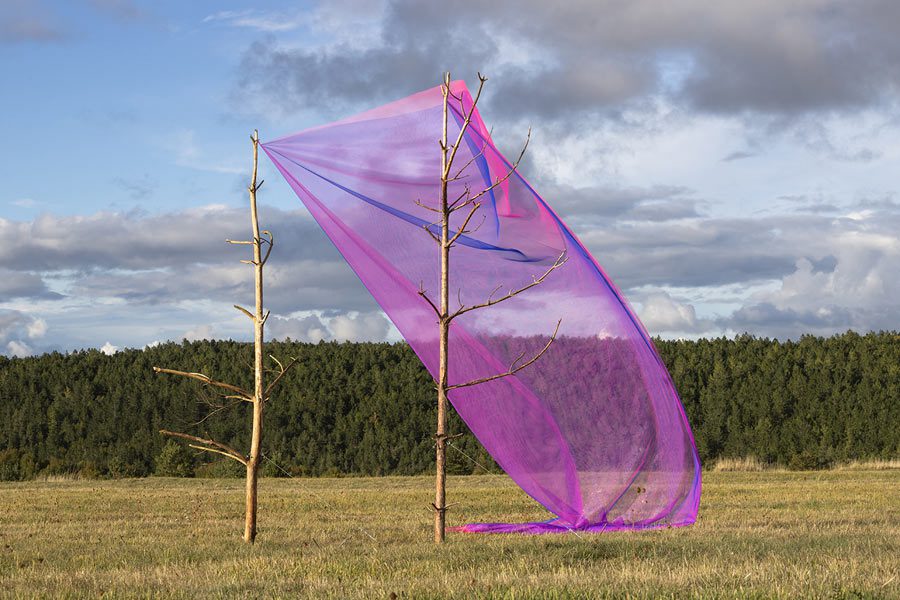 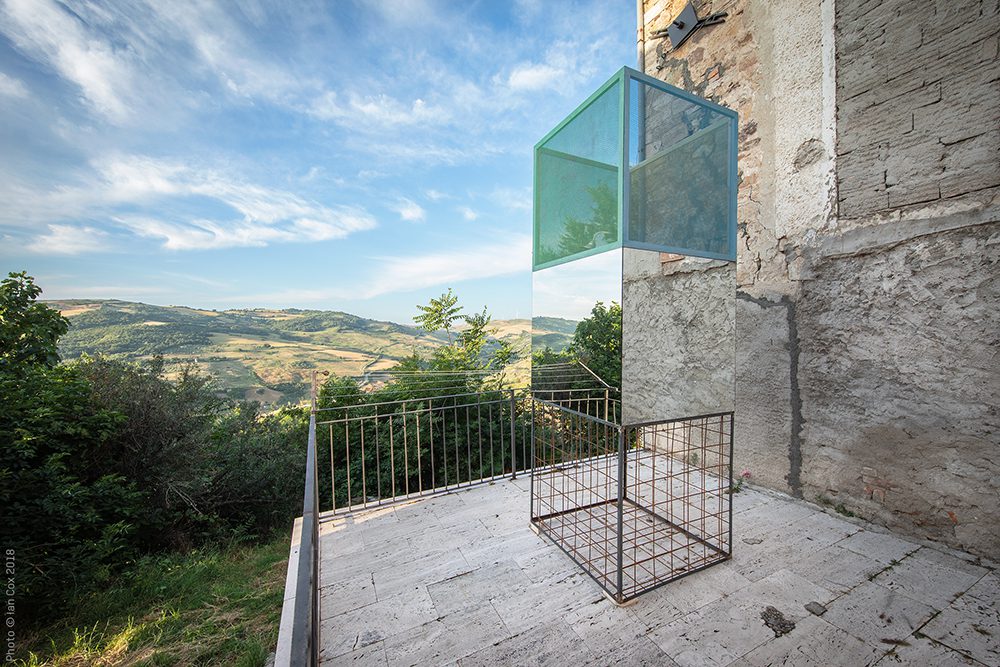 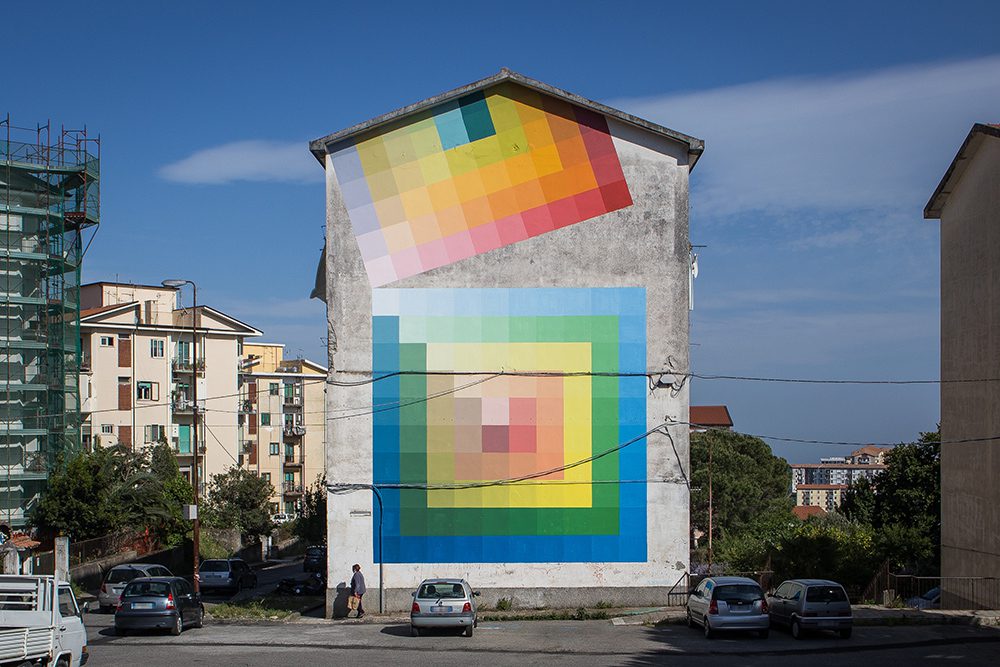 The Italian artist Alberonero began experimenting with graffiti at the age of fifteen while developing a personal and recognizable style of painting. For years he has been immersed in the study of color perception, interested in the emotional possibilities of tonal combinations, while at the same time he delves into the synthesis of form, with the idea of minimizing visual language and reducing the world to color, to sensations.

His works of public art have a strong relationship with natural environments in which the artist generates an intimate dialogue with the space, and a conception of art as a poetic and fundamental element of the landscape, managing to create delicate compositions based on the surrounding environment. 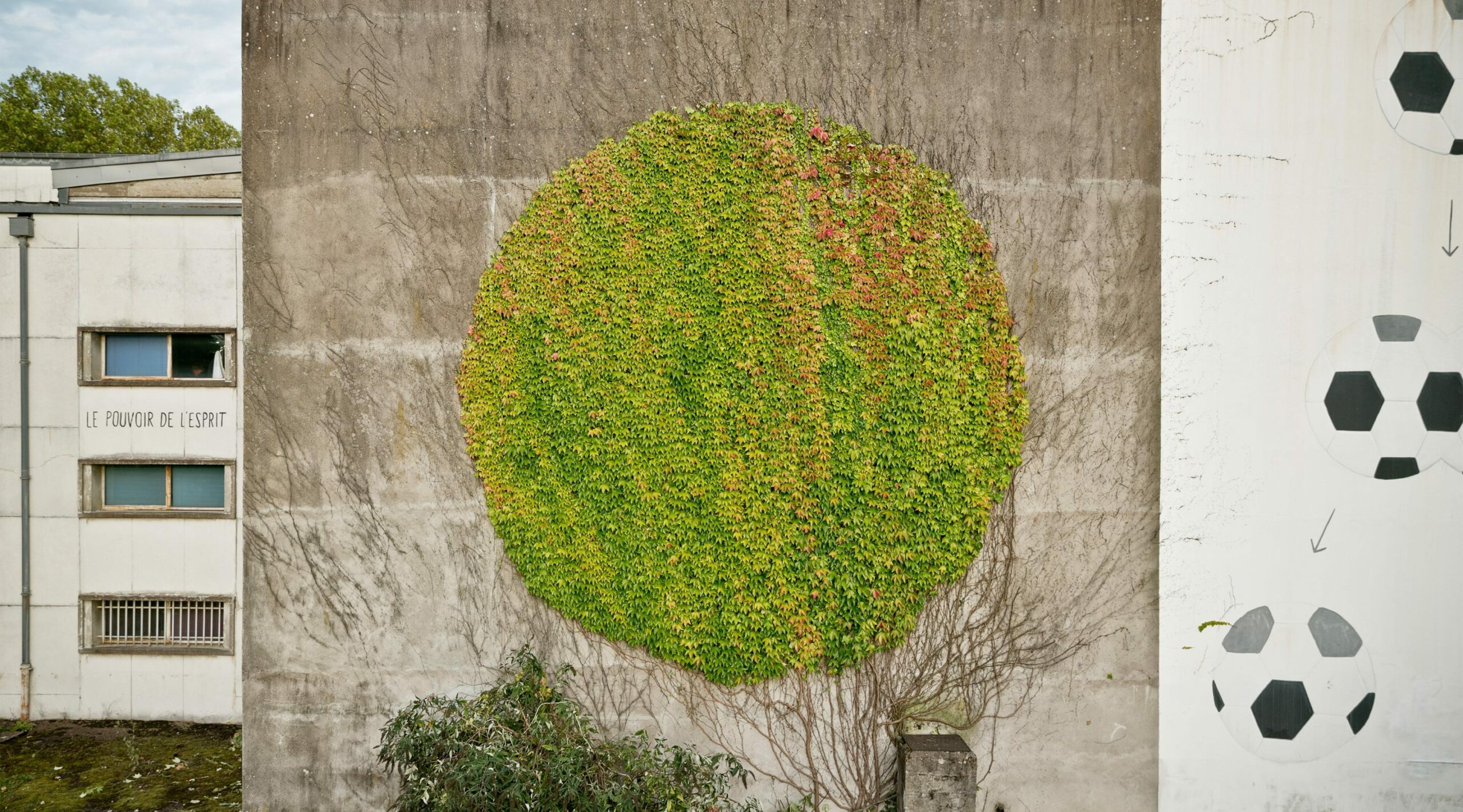 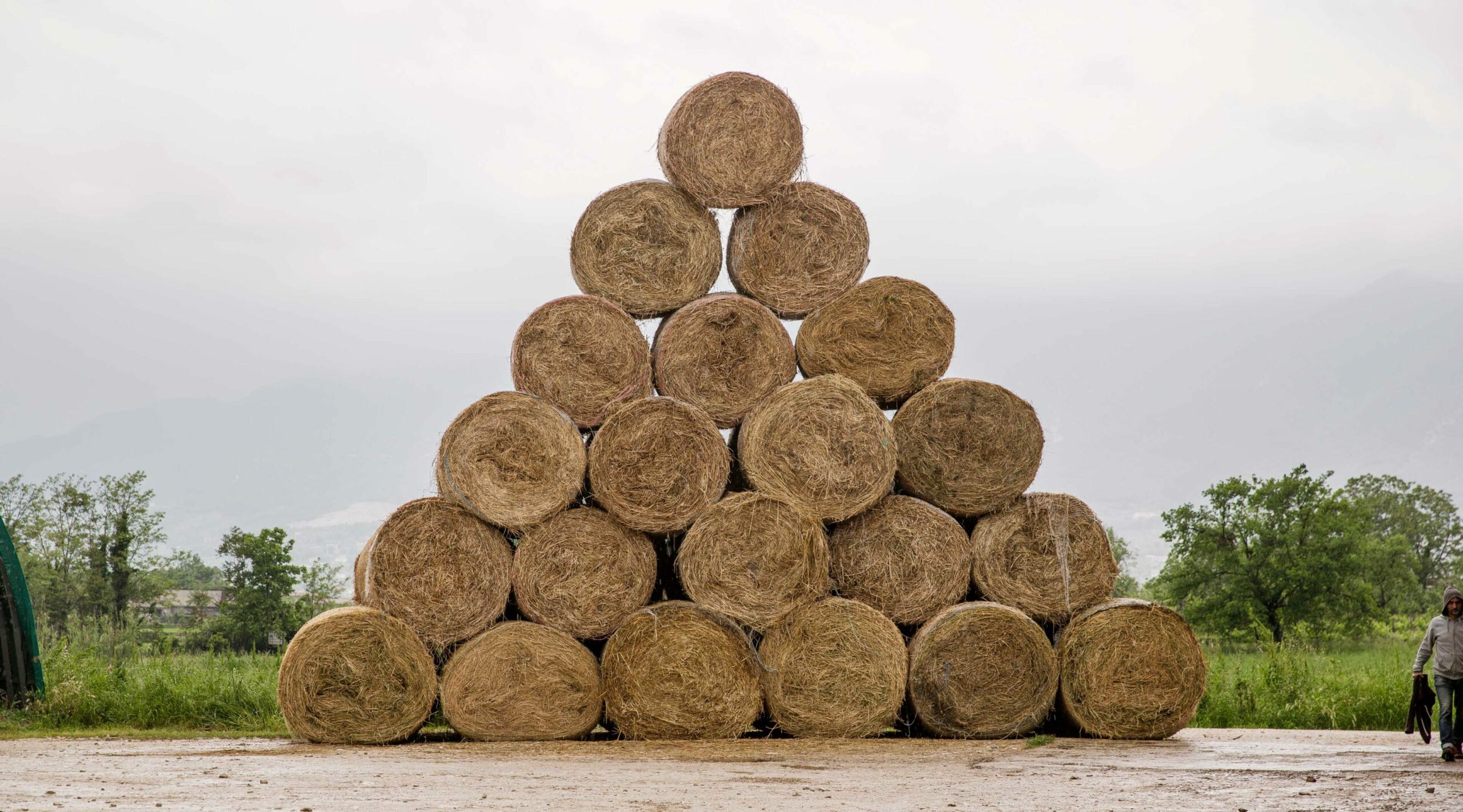 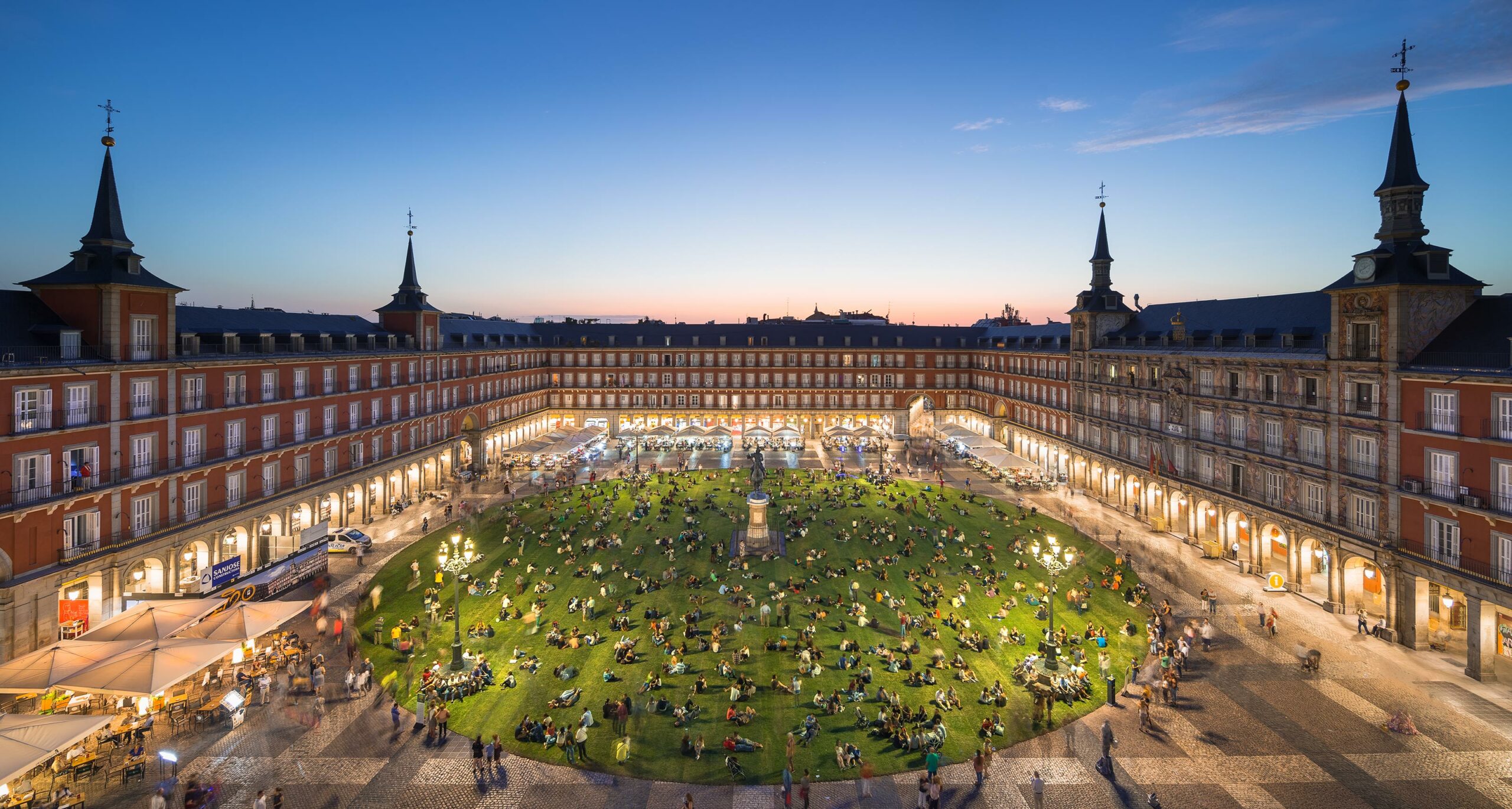 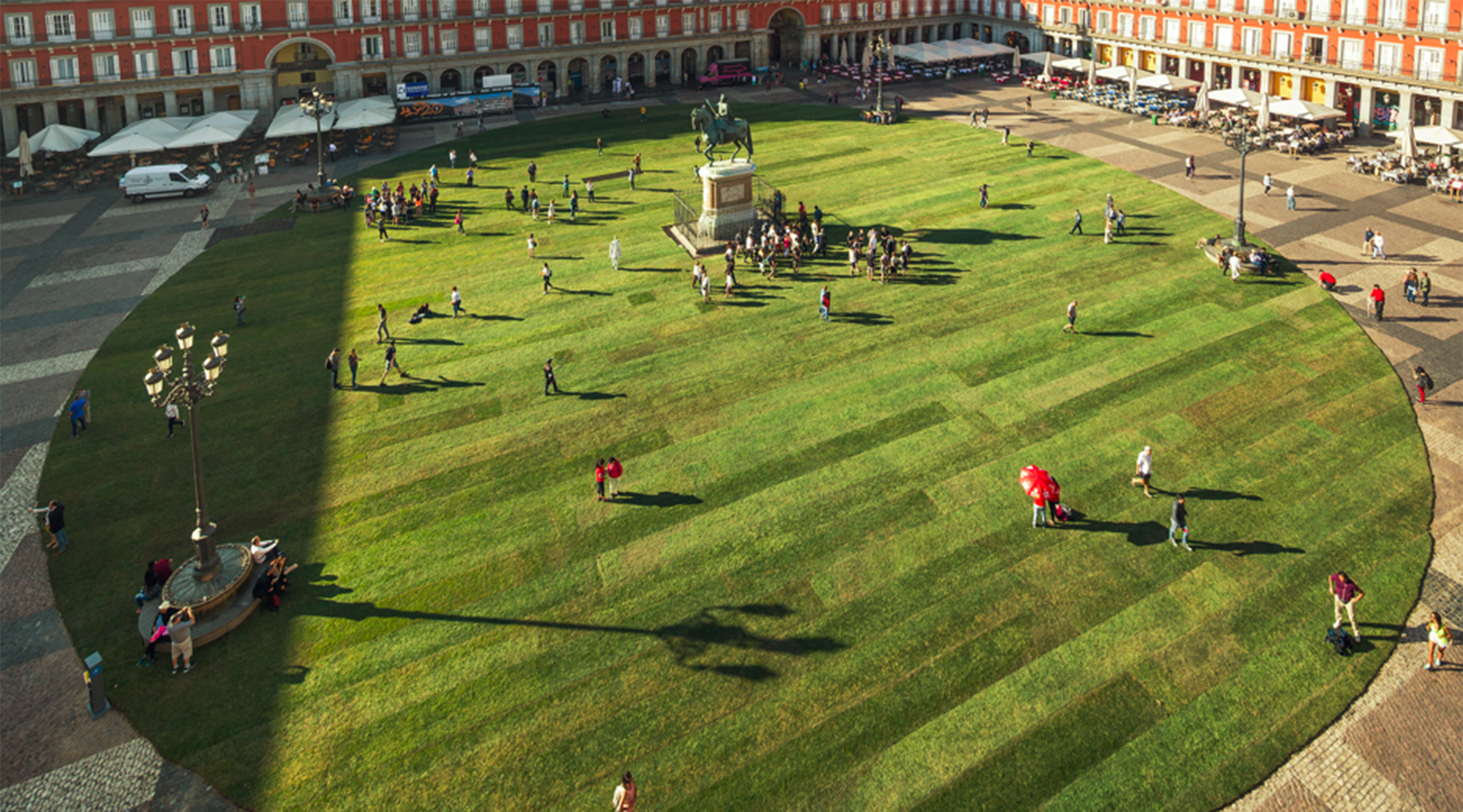 Since the 1980s, the city has been the starting point for SpY, enigmatic and anonymous in equal parts, who turns public space into a laboratory for experimentation and a direct means of communication with the passerby, which he develops through the appropriation, transformation or replication of urban elements. The artist, without being an exclusive representative of Land Art, has been strongly influenced by this current and has also experimented with it on more than one occasion.

SpY is the architect of interventions as anodyne and surprising as the large carpet of grass placed in the Plaza Mayor in Madrid to celebrate its 400th anniversary, a chimney protected by UNESCO that seems to expel red smoke or a huge luminescent moon hanging from the top of the tower, still under construction, of Caleido in Madrid. Observant and ironic, the artist plays with the large-scale work to raise questions in the viewer and discovers us the work by Andy Goldsworthy:

«Goldsworthy, one of the greatest exponents of the “Land Art” artistic current, is one of the artists who most excites me on all levels,» says the artist. «He uses perception as an indispensable tool and present in all his work and assumes the rhythm of nature and landscape as a sculptural medium. He also has books like “Time”, “Enclosure”, “Passage”, “Stone”, “Wall”, among others… All incredible. He inspires me enormously on how to learn to see the extraordinary in the ordinary, to see old lands with new eyes,» he concludes. It is worth investigating the artist’s work to delve a little deeper into this artistic current. 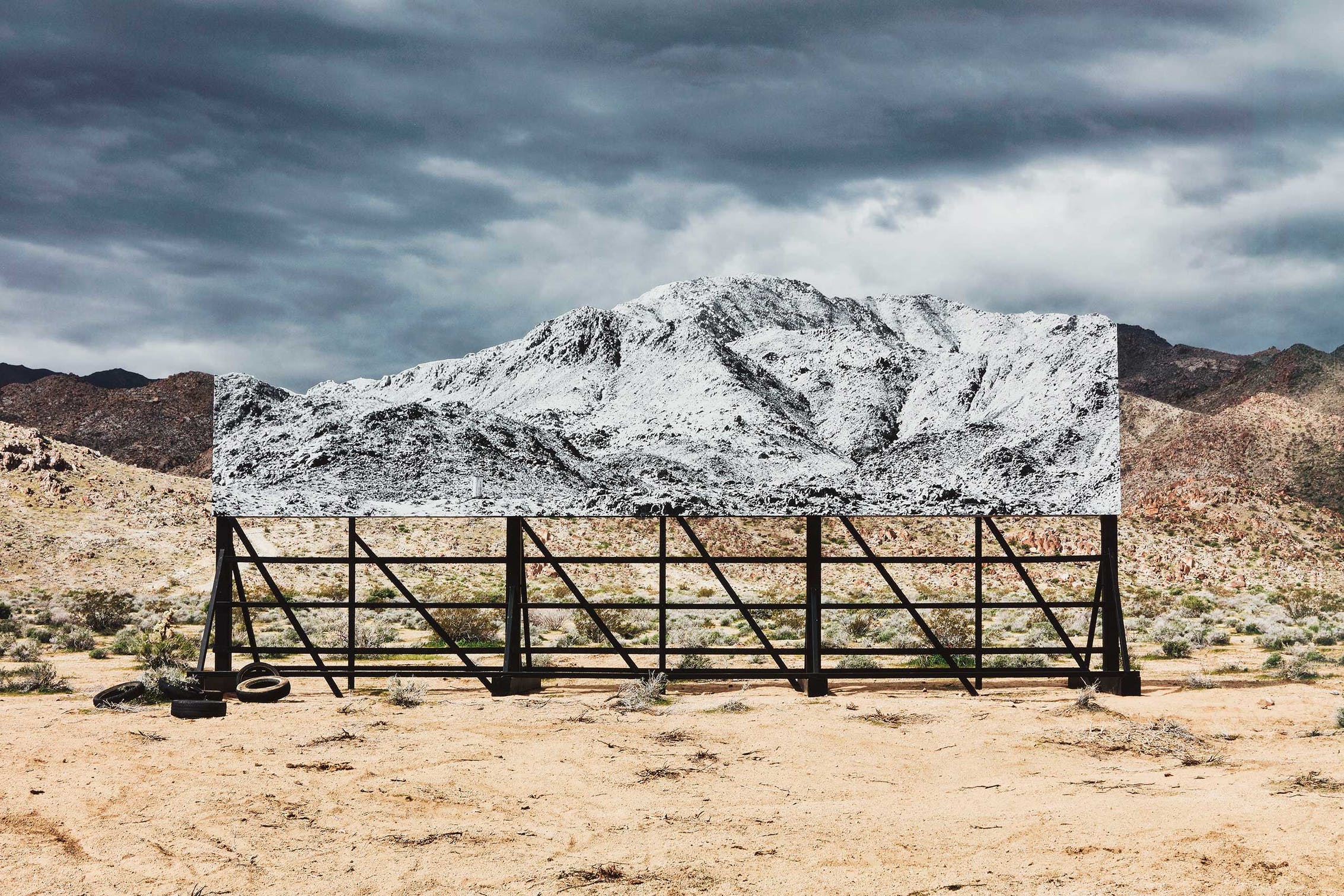 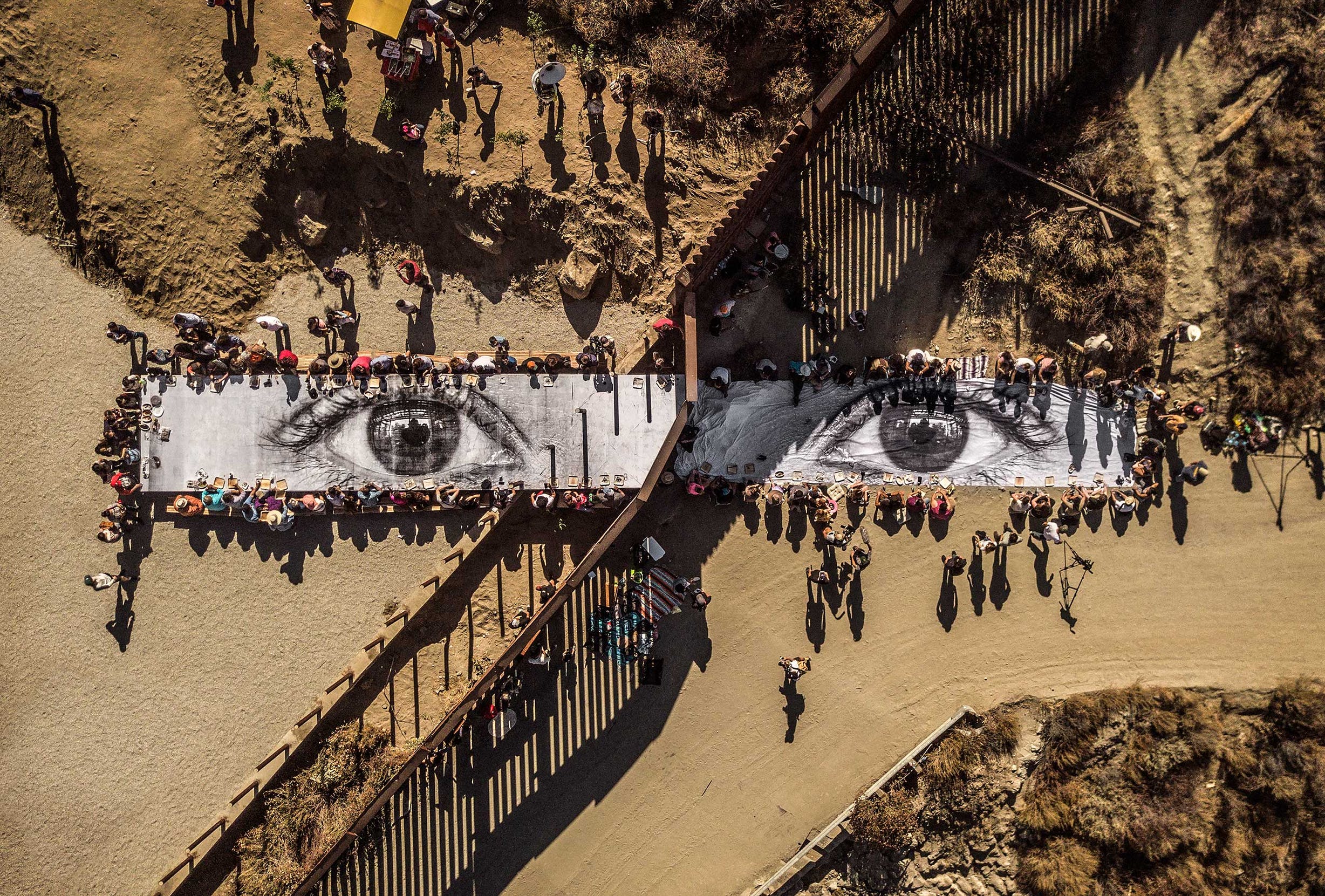 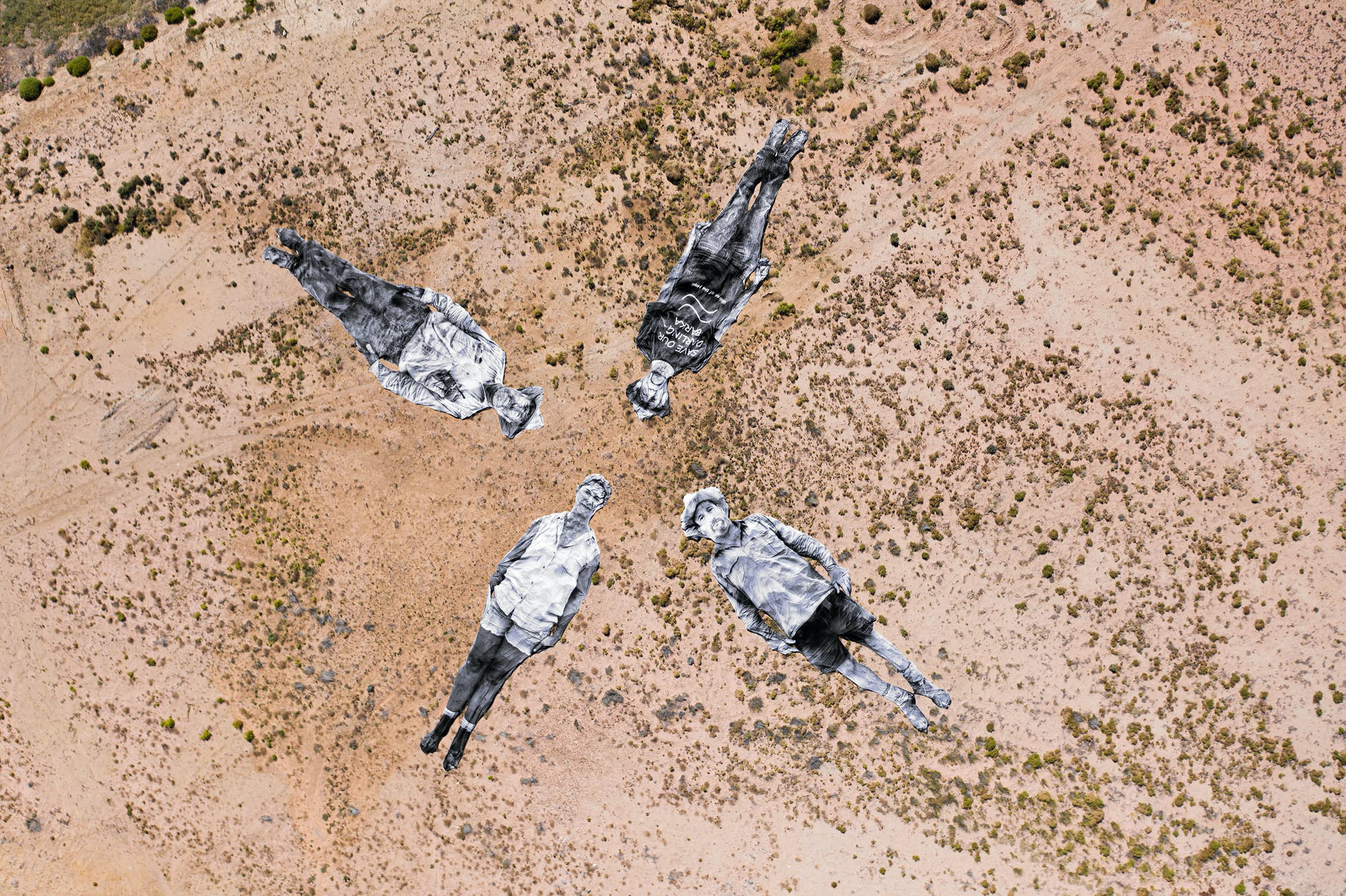 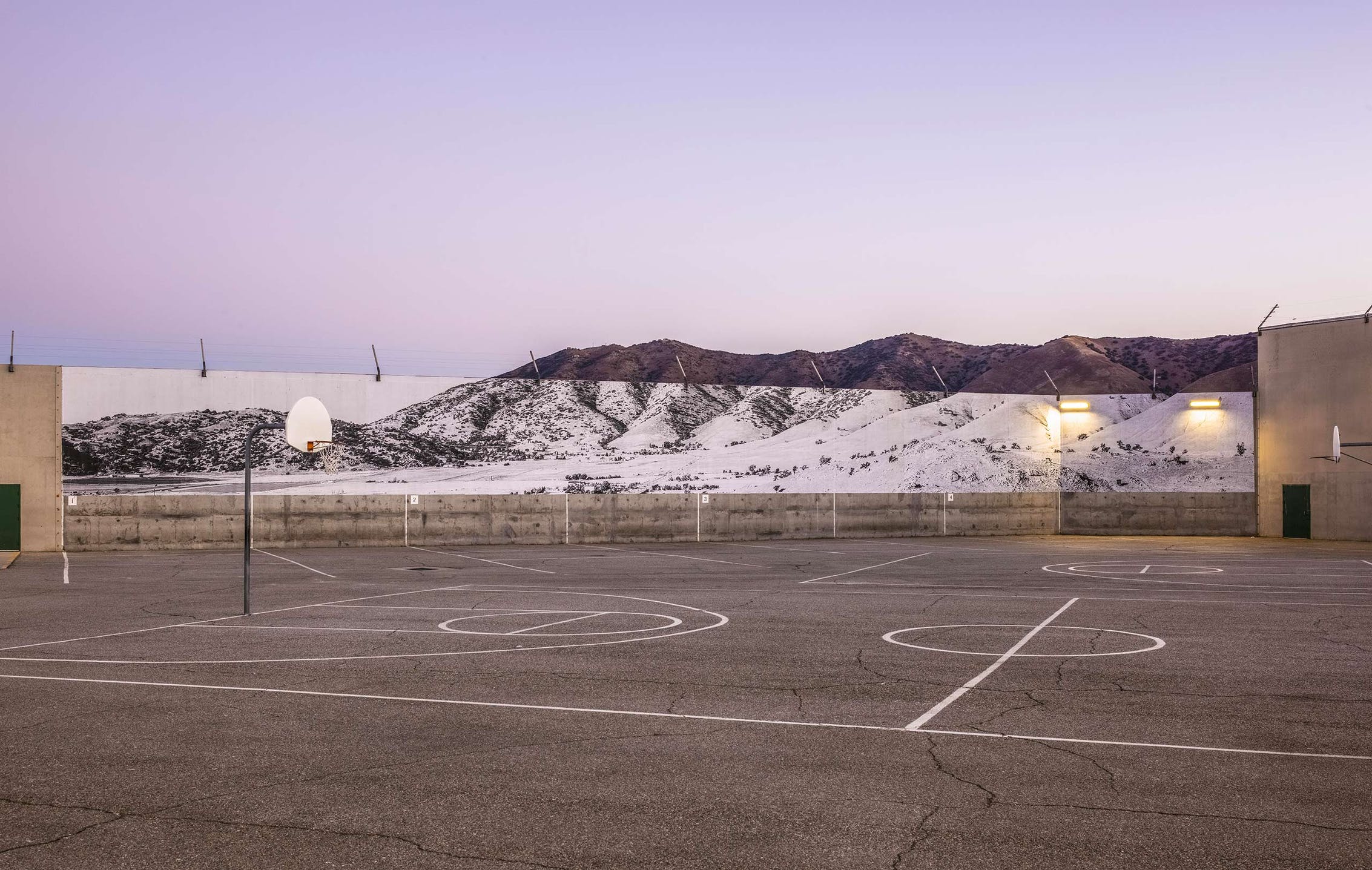 Photography has been the tool that has allowed the French artist JR to integrate his work in nature, but also to openly exhibit his work in cities around the world thanks to his photographic collage technique. And you will know him for his incredible trompe a l’oeil (trompe l’oeil) works made on the esplanade of the Louvre or the Eiffel Tower in Paris.

JR’s work, although it cannot be called Land Art as such, does manage to represent an approach to this current in which the artist integrates his photographs printed on paper in XXL sizes with the natural landscape.

Throughout his career he has developed what he calls infiltrated art in which local communities participate in the act of artistic creation, without any stage separating the actors from the spectators. An example of this is ‘Migrants’, where the gaze of a child crosses the land barrier between the US and Mexico and around which a huge pic nic is organized on both sides of the border or in his different ‘Homilies’ in which through his giant photographs the artist plays with a strong component of social-political denunciation. 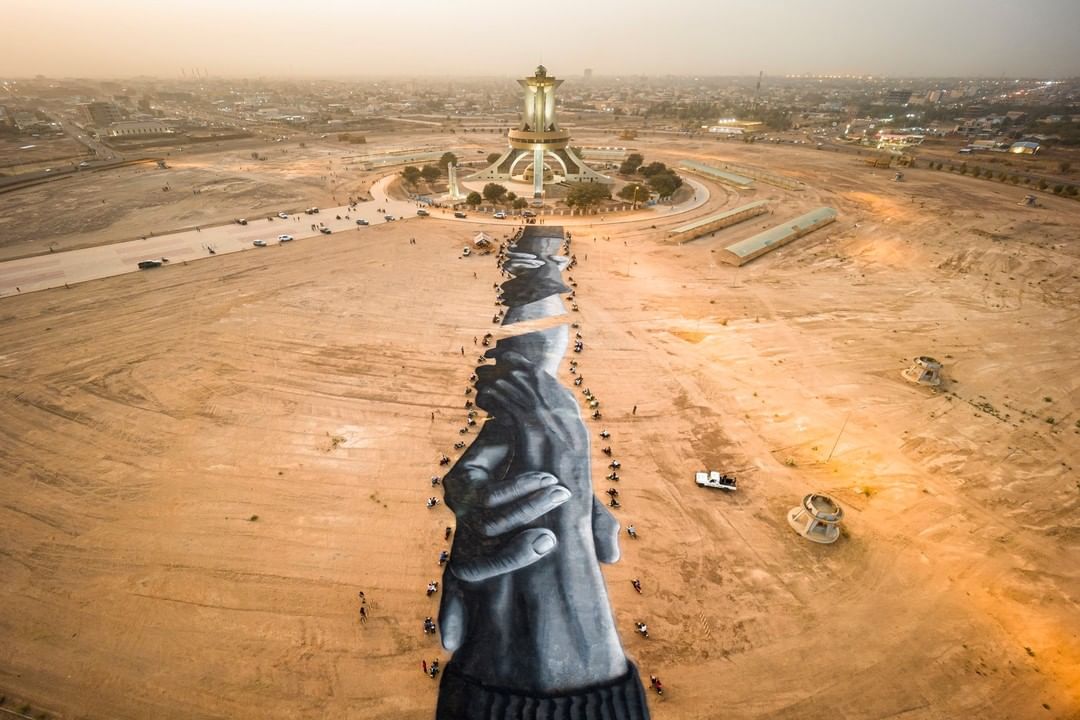 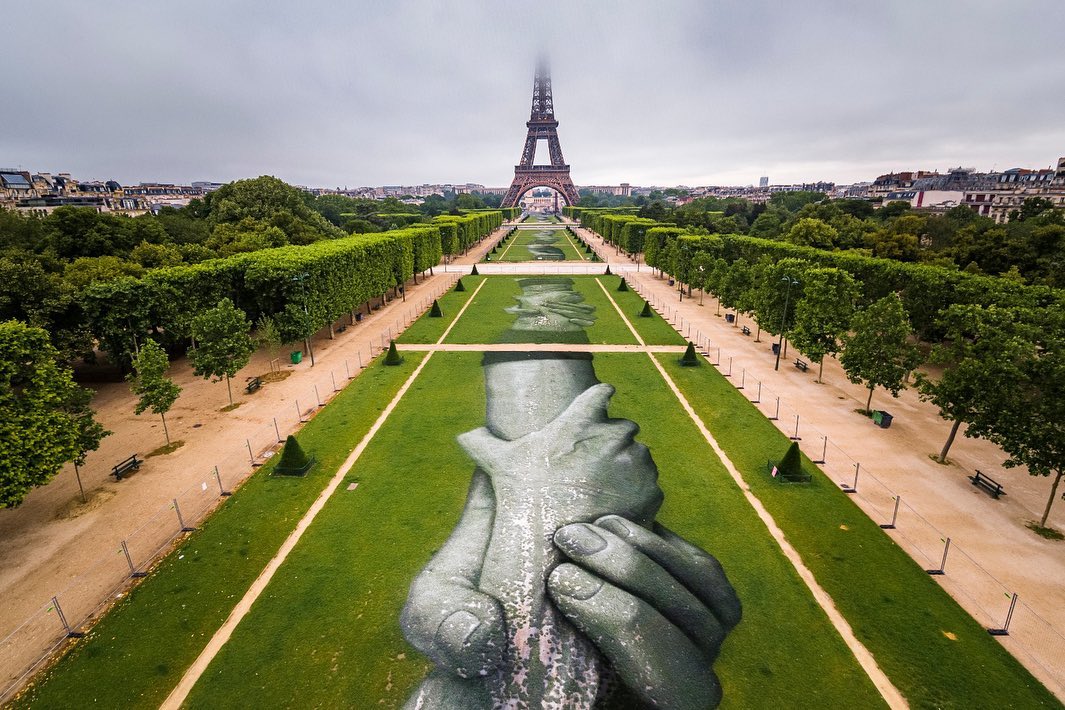 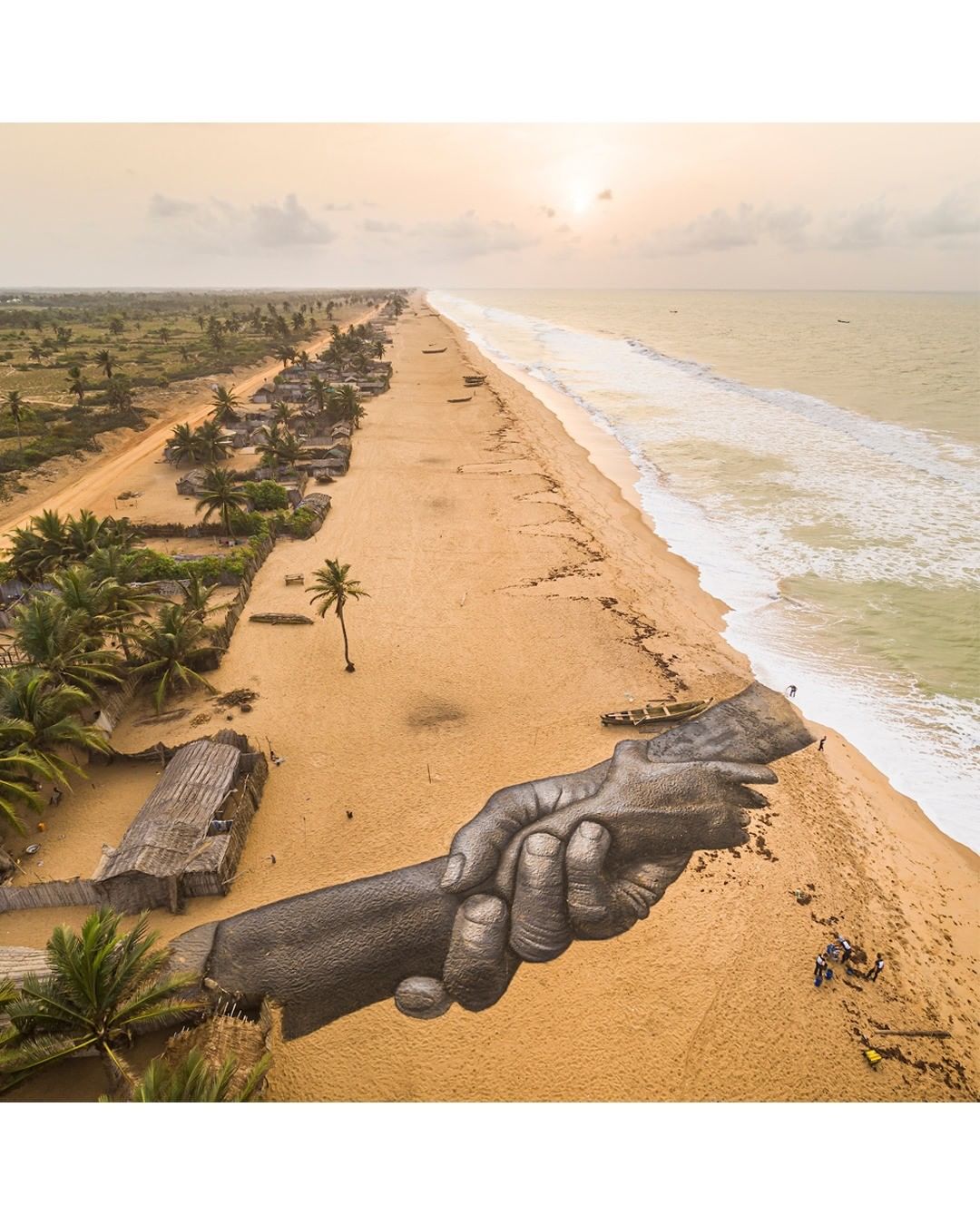 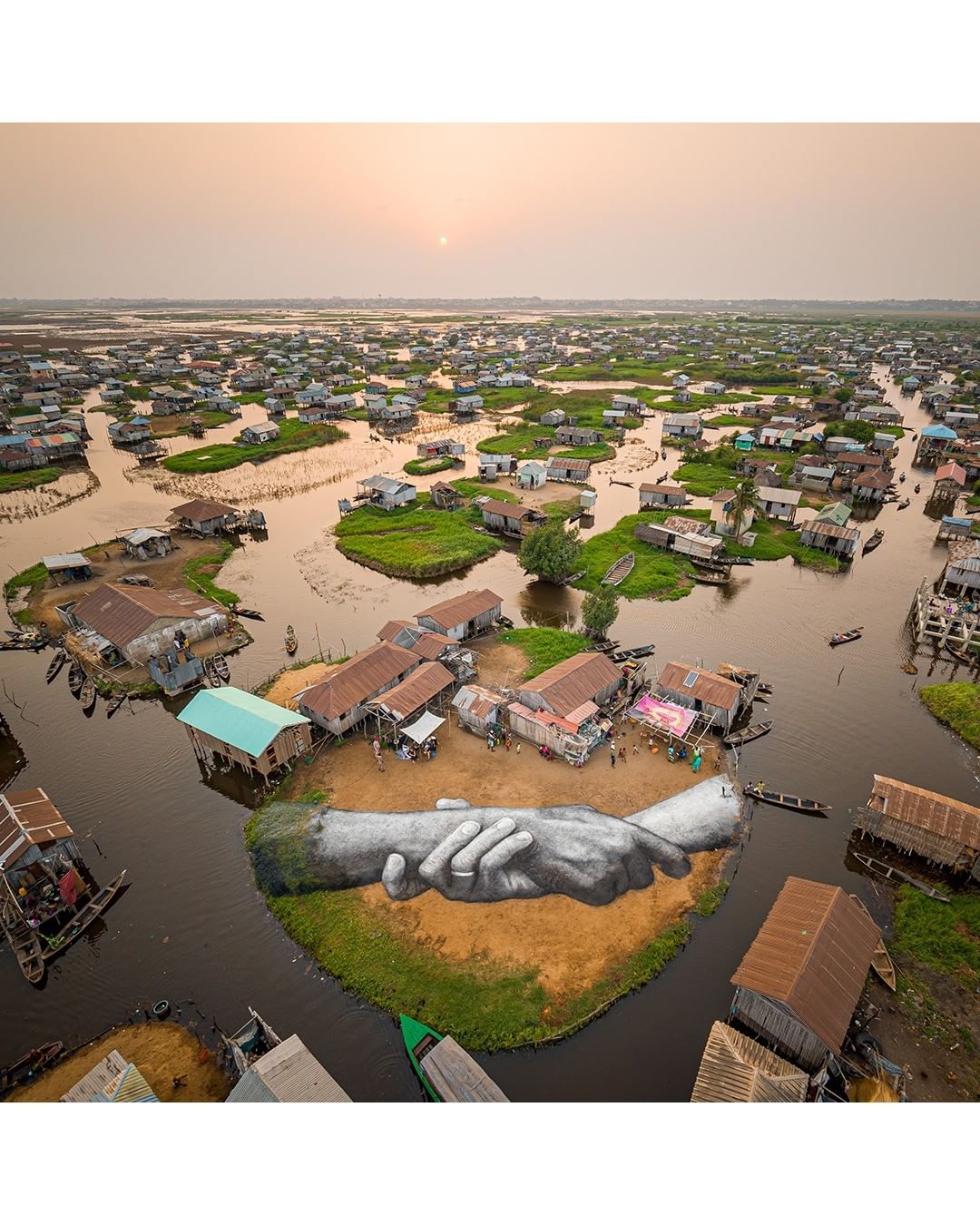 Guillaume Legros or Saype (Belfort, France, 1989) has been revolutionizing the world of urban art in recent times with his pieces halfway between land art and graffiti. His gigantic frescoes made on grass with 100% biodegradable paint (which he prepares himself) go around the world every time he posts them on his networks and explore the problems that concern human beings, our place on the planet and in society.

He has worked in Cape Town in South Africa, Geneva, Istanbul or on remote beaches in Brazil, but above all in the incredible green and mountainous landscapes of the Swiss and French Alps, where he lives. Hands intertwined with each other are one of his hallmarks in which he represents the union between cultures, religions or countries, always linked to the place on which he creates his work. 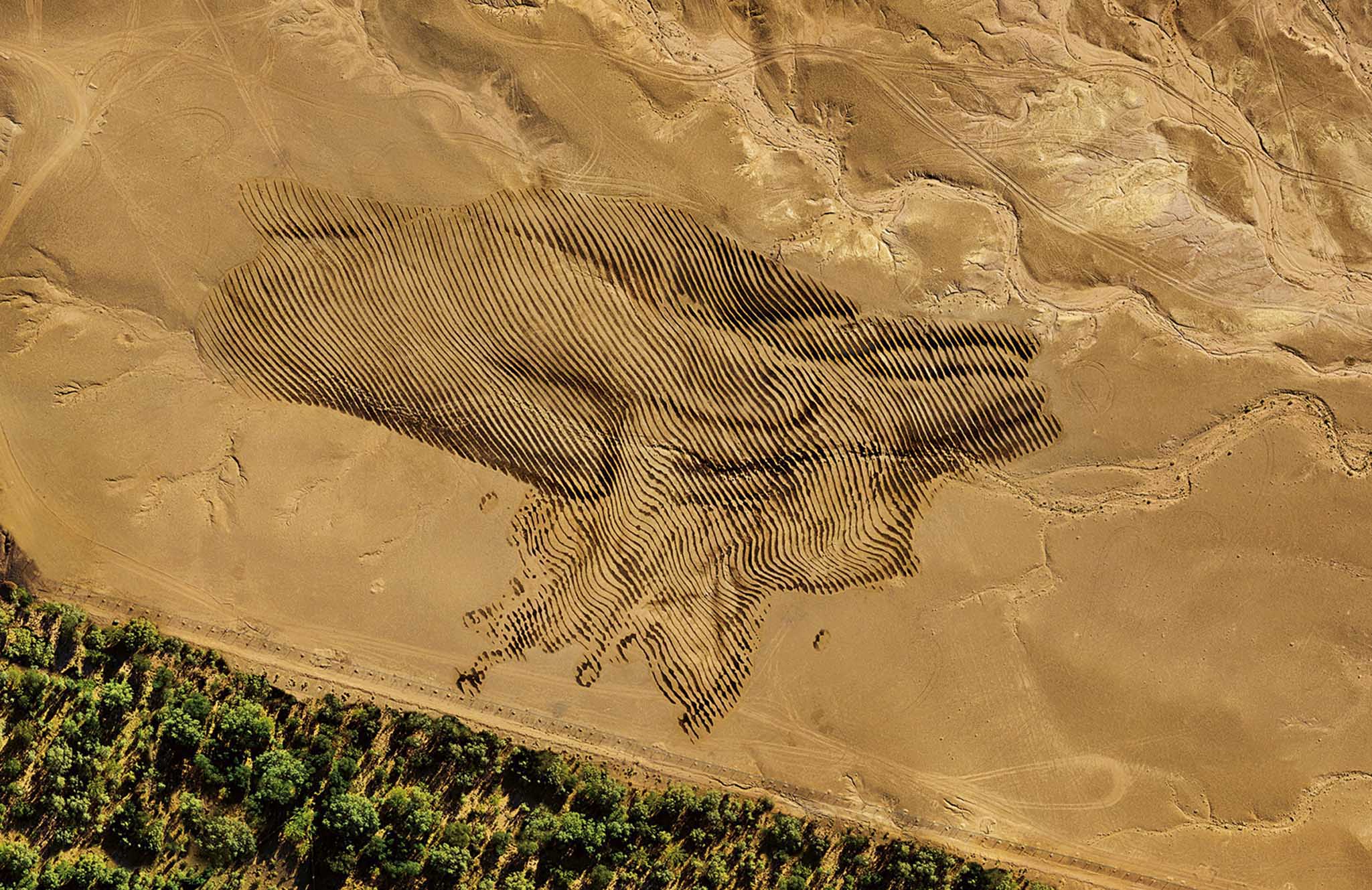 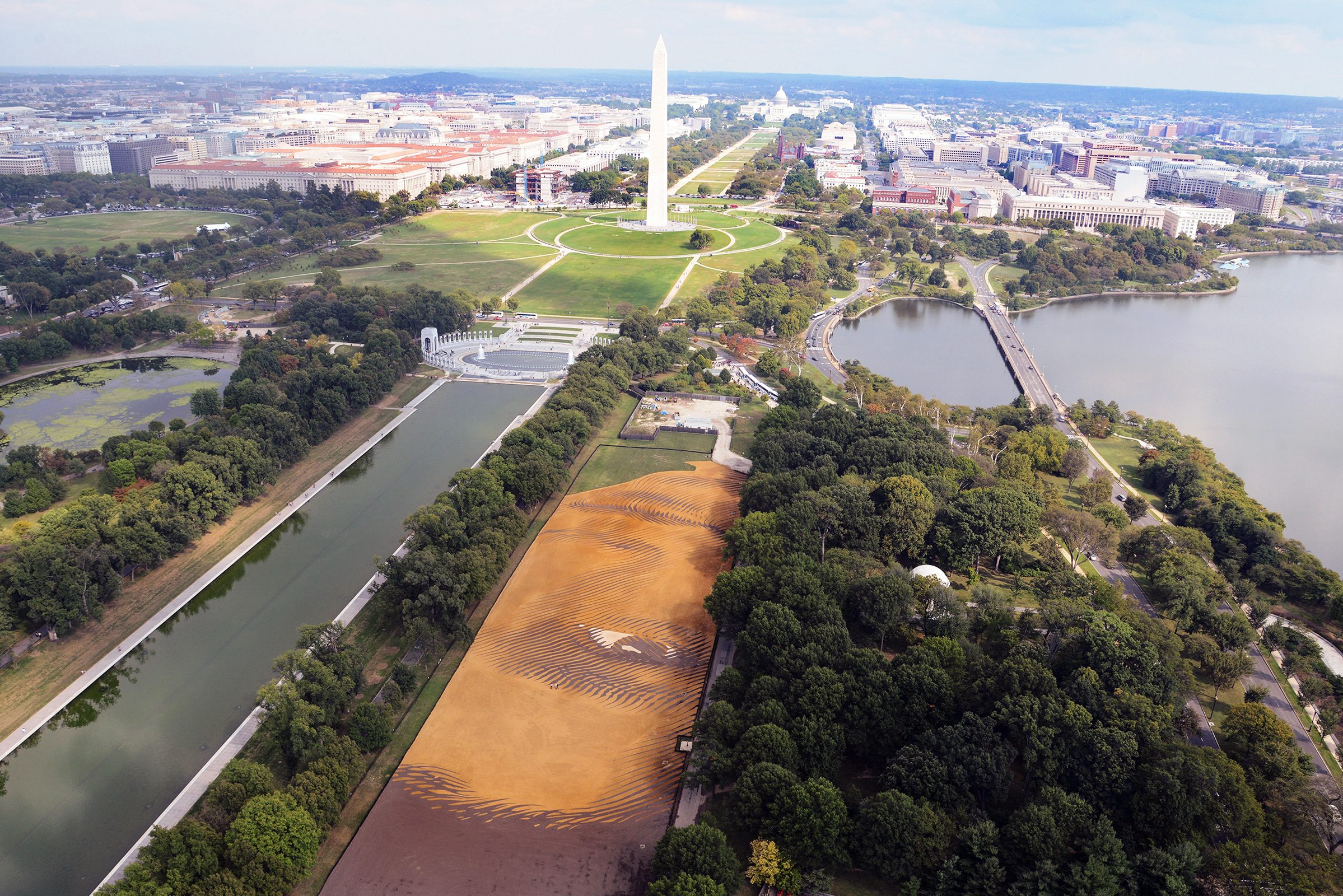 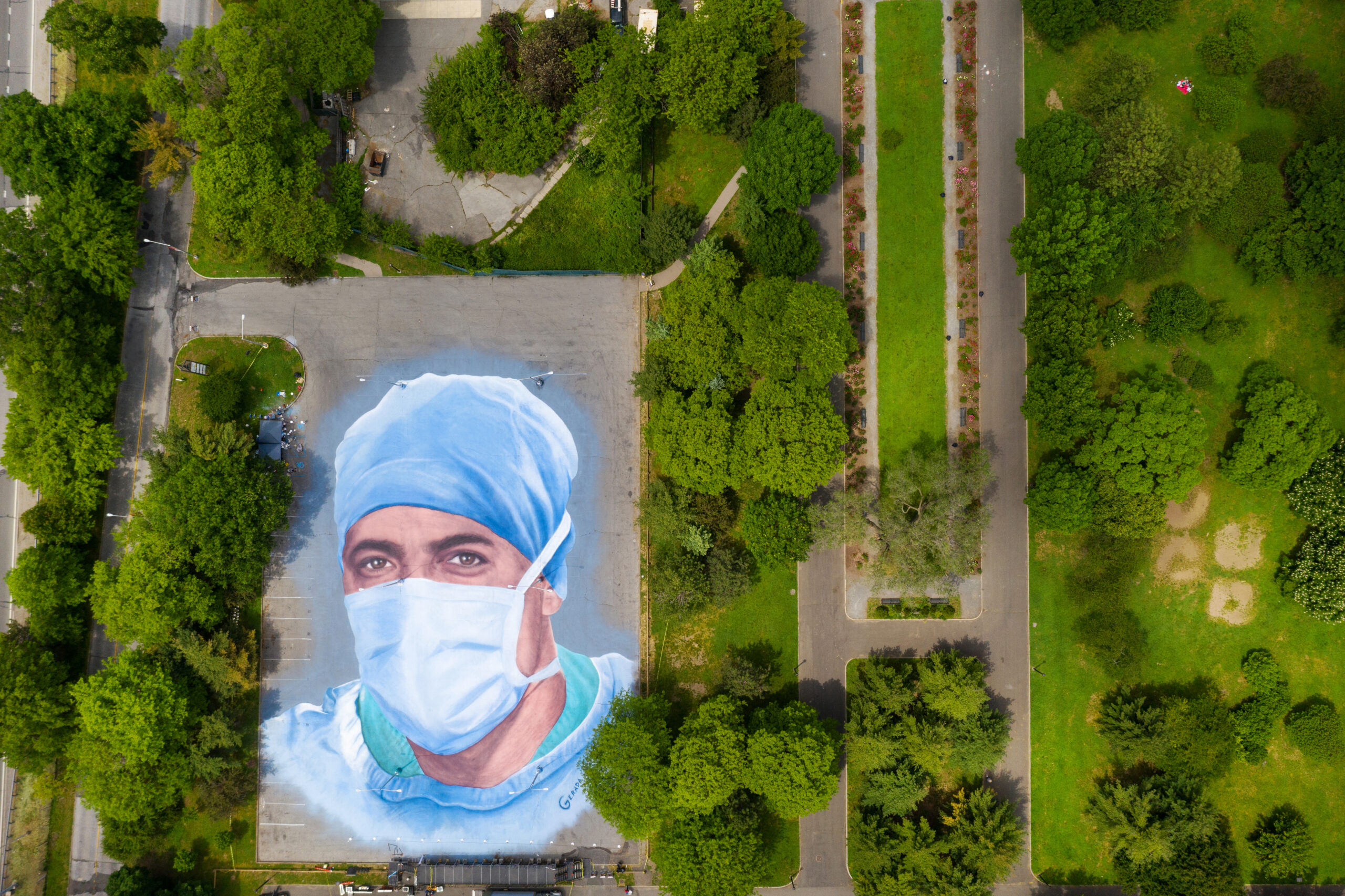 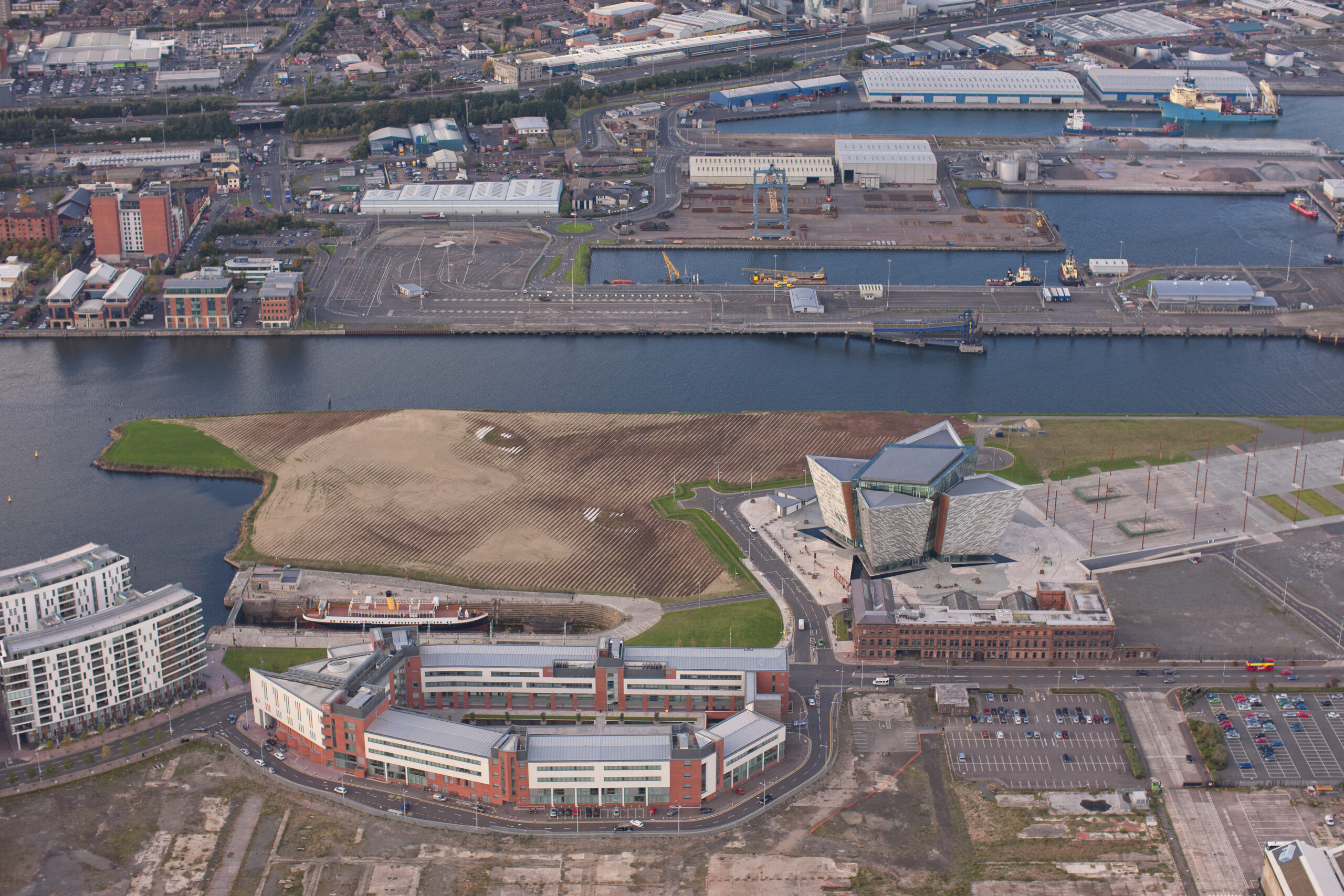 Jorge Rodriguez-Gerada is committed to producing public art that raises awareness of environmental and social issues like climate change and human rights. He predominantly creates his work in urban spaces on a large scale, with the scale of the work often reflecting the importance of the issue.

Gerada is a Cuban-American Contemporary Artist born in Cuba and raised in the United States and was a founding member of the early ‘90s New York Culture Jamming movement, where he launched street art interventions, and altered billboards and public advertising. His process and philosophy were highlighted in the ‘Culture Jamming’ chapter in the book “No Logo” by Naomi Klein.

Since then he has experimented in his directions as a muralist working with charcoal murals that deliberately fade away after a certain period of time, as well as painted murals using long-lasting mineral paints that may last up to one hundred years. While living in Barcelona, Spain, he became intrigued with the textures of the city walls and began to include that into his artistic process. Using natural materials, such as sand and soil, antique bricks and stone elements, and centuries old wall textures, Gerada’s palette is subdued due his infinity with these materials. He creates work from the small-scale and intimate Fragments series to the large-scale and expansive Terrestrial series land artworks.