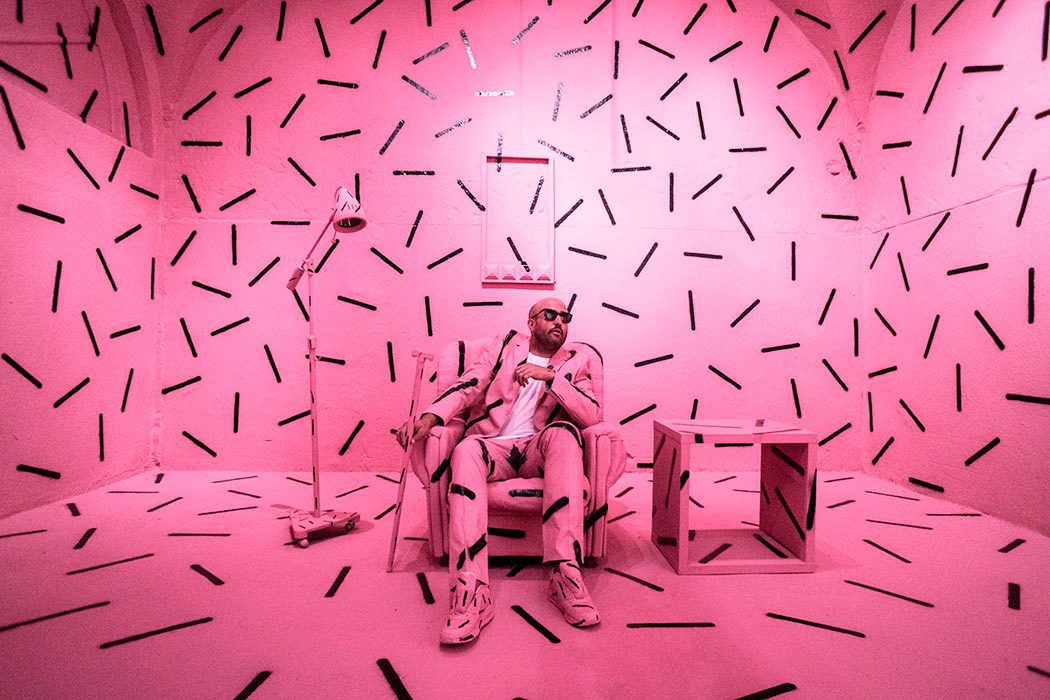 Palm trees, flamingoes, shapes and figures taken from elements found in the nature combining pastel tones and more strident ones conform artist Antonyo Marest (Alicante, 1987), who takes us back to the 1920s and the traditional Art Deco architecture in its most contemporary version and with a Mediterranean taste. His work ranges from painting to sculpture, where he introduces abstract elements taken from nature itself, such as beams of light, undulating clouds and flowing waves of sea that incorporate dynamism into his work and support his chromatic discourse through its combinations. But his work has jumped from the canvas format and under Marest name today you will find skateboards with his designs, a clothing line with swimwear and he has even customized cars and offices with his vibrant designs. Energy, positivism and above all good vibes with which he transforms spaces and that will make us dream of a tropical summer.

Your first memory painting… The first time I painted something that is still preserved today was an abstract painting on a cake tray when I was two years old. My mother still has it at home.

The last thing you painted on the street… I just painted a building at Knokke Beach in Belgium. I dedicated it to my wife, who always tells me I dedicate everything to our daughter Allegra. 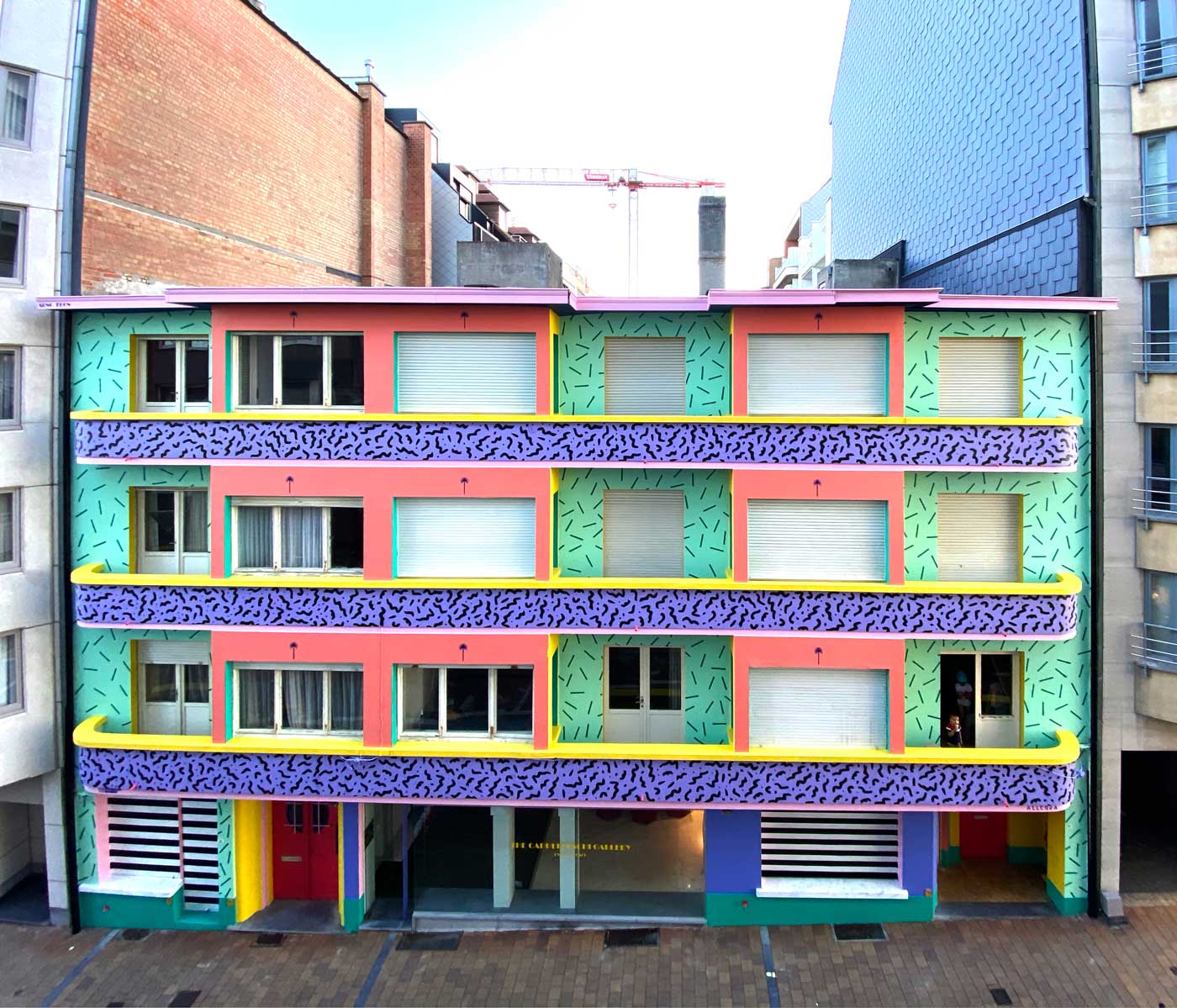 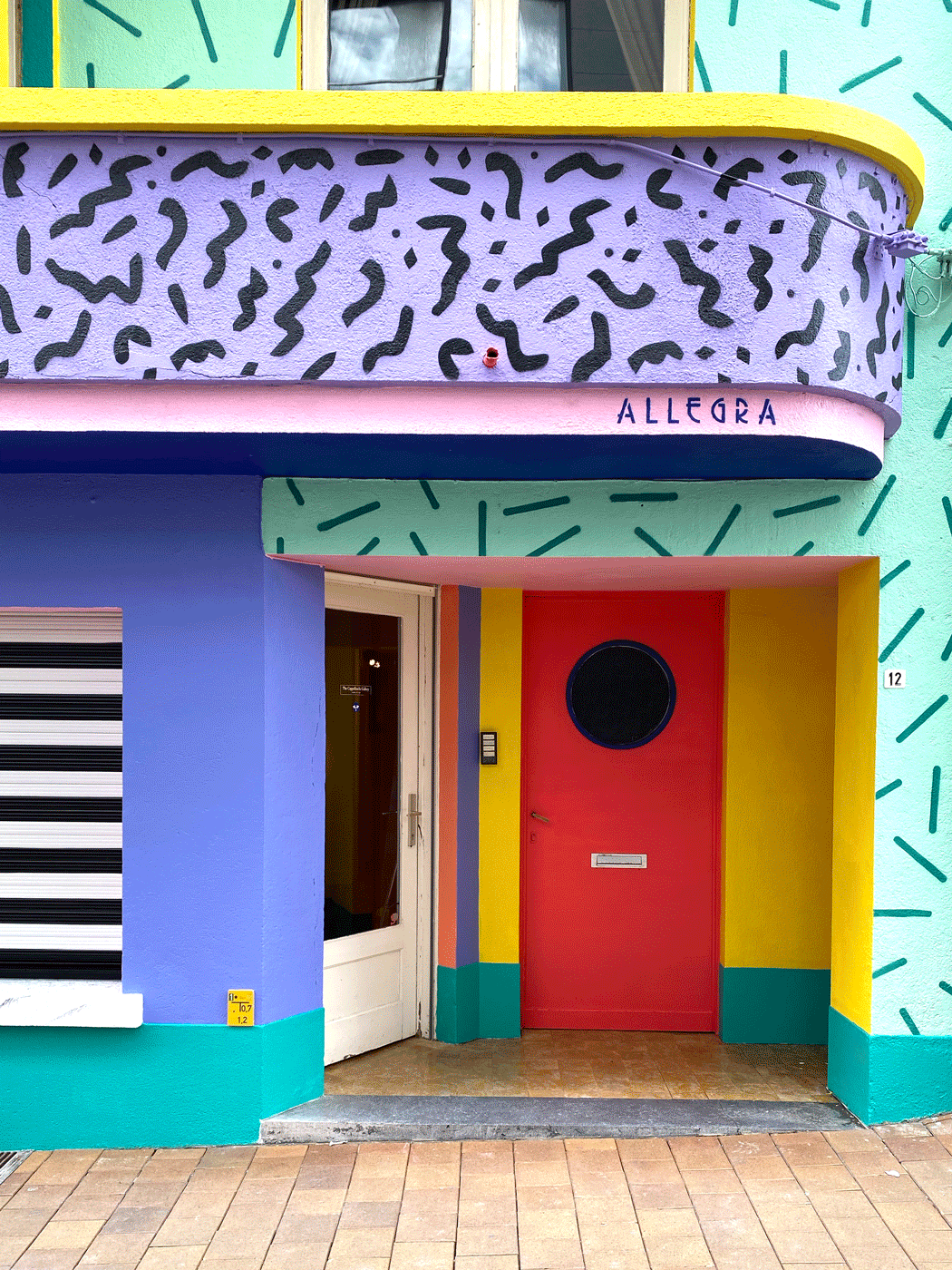 Street or studio work? I enjoy both but  when I really feel identified and free from everything is when I paint on the street. Studio work is necessary because people want to have something of yours at home and they can’t take a wall with them. 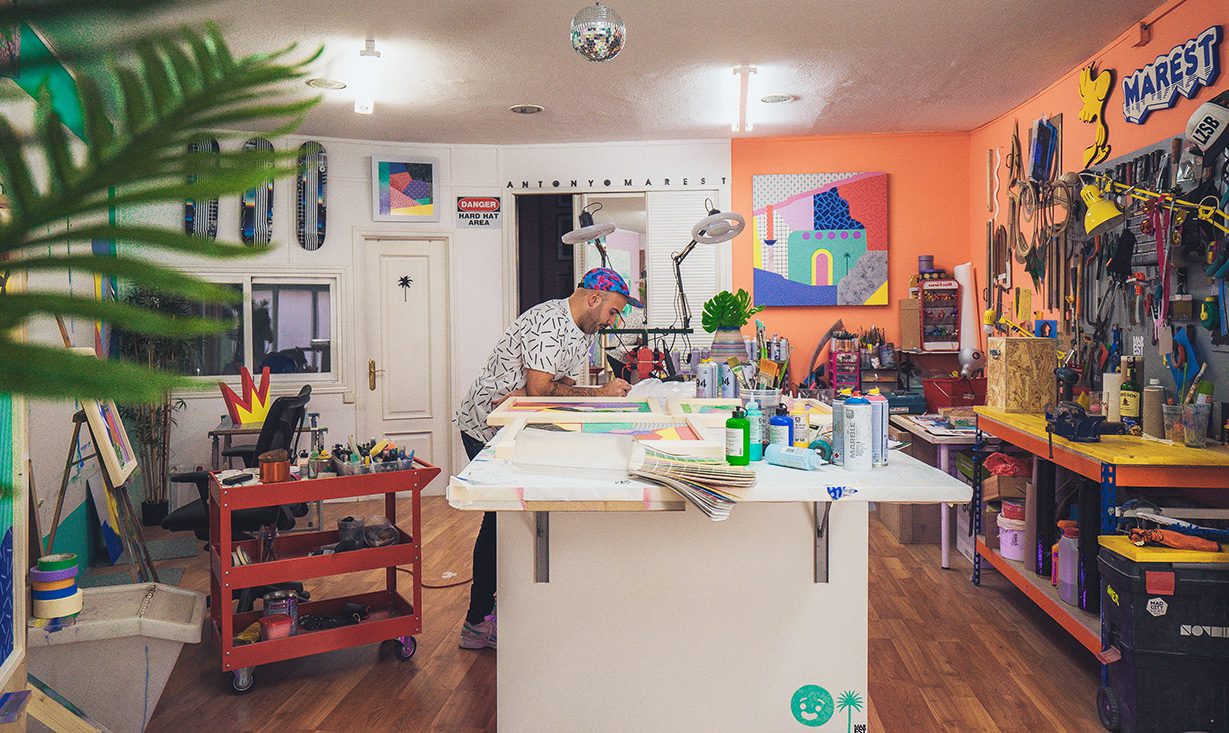 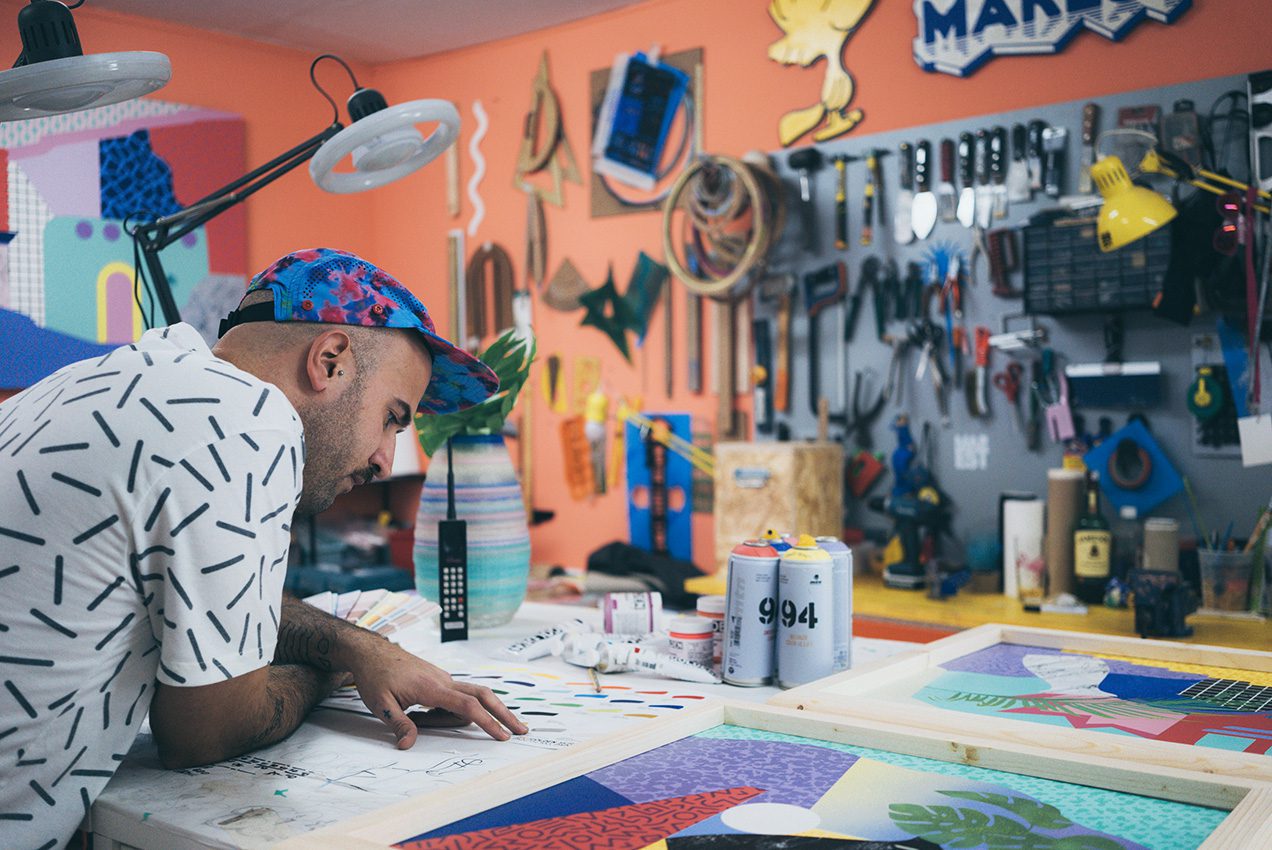 Your color? Paris Green. The Pantone palette reference is 332C, in RAL 6017 and in NCS it’s 0530B90G. It represents my work and takes me to a calm sea. I am a very active person but I need my moments of mind. It’s also one of the most used colors in Art Deco. 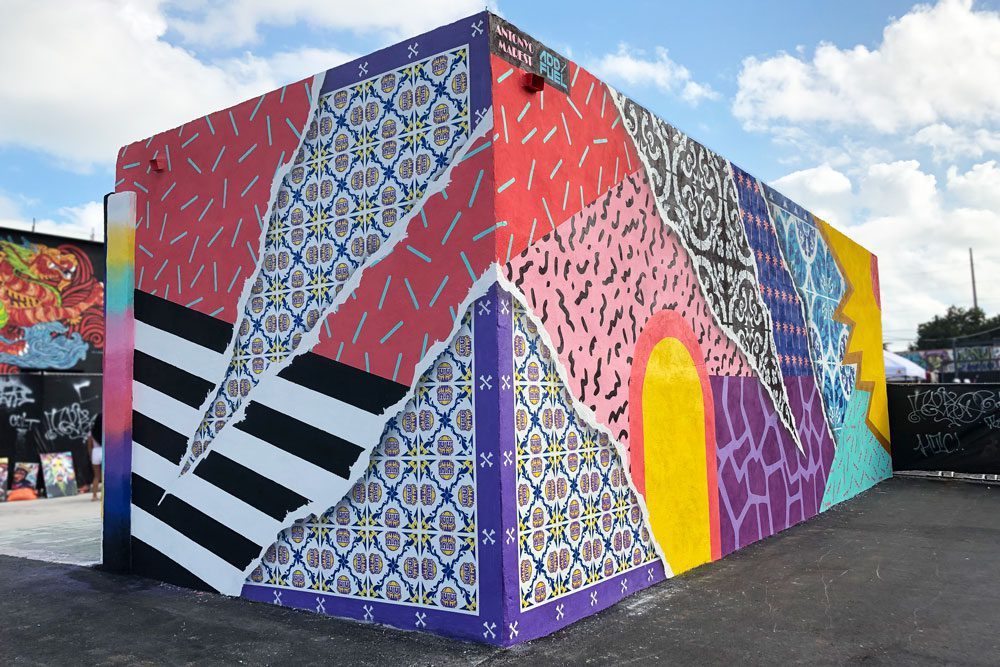 An artist that you admire… Remed. He’s a guy who’s on his own, who doesn’t care about the rest of world and is a perfectionist on his work, which is something I value very much. Just like Felipe Pantone, with the technology and the finishes he uses, right now he’s a number one for me.

A less known artist with good projection… There’s a girl I met in India called Osheen Siva, she does kind of a comic style mixed with a more feminist message representing Indian women in art.

A painting style… I’m crazy about abstraction. Everyone can see something different on it. You see a tree where maybe there’s a crack on a wall. It has so many interpretations and at the same time none that it makes you feel like in a no man’s land. 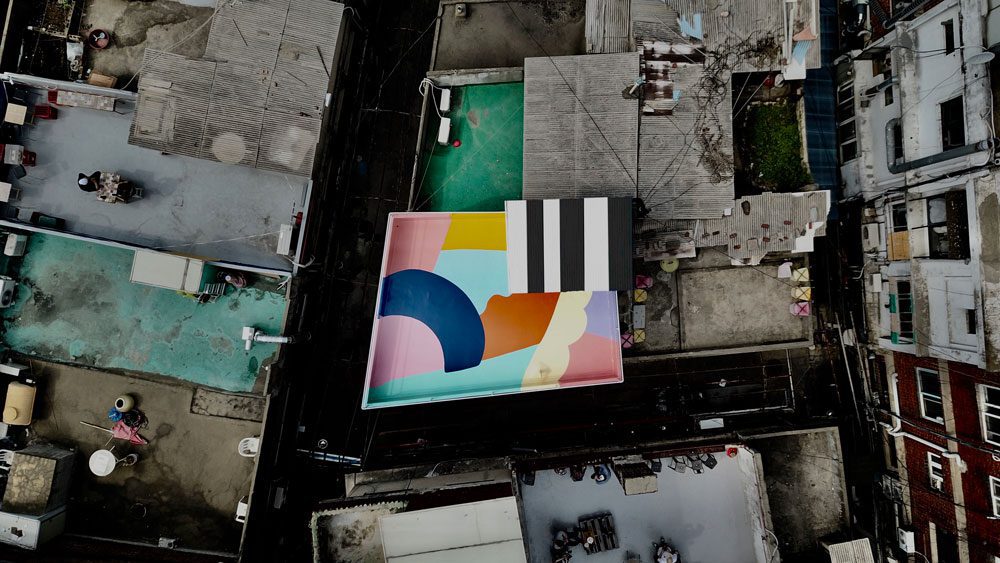 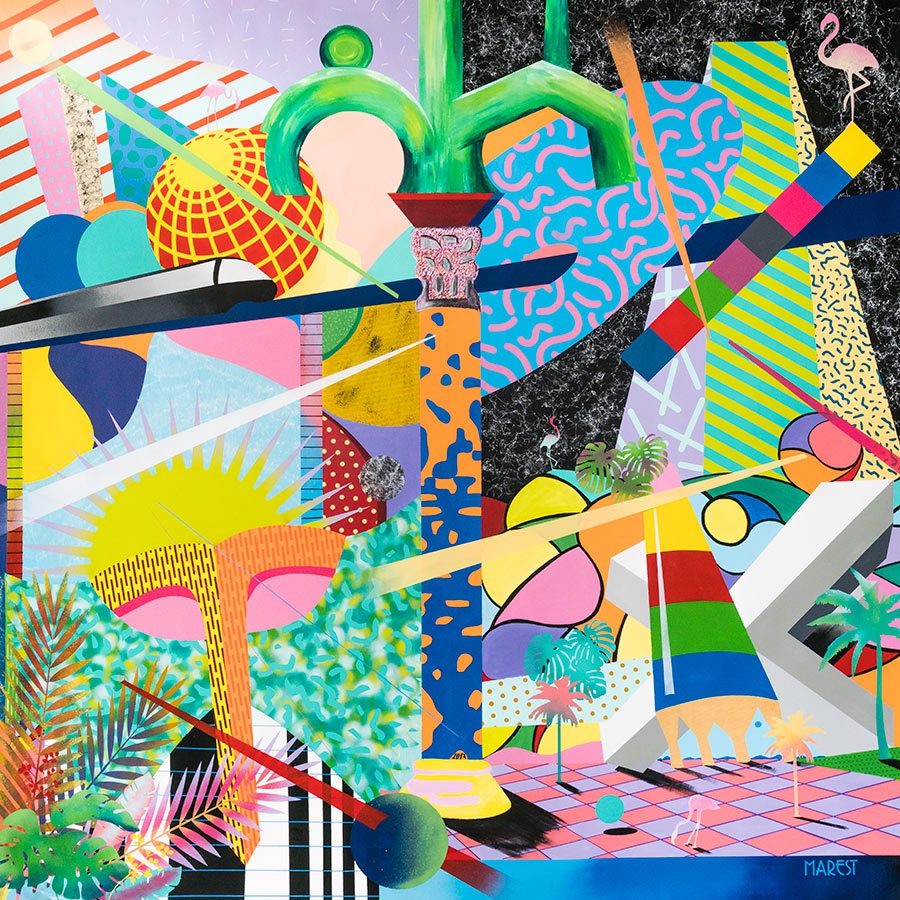 The work you’ve enjoyed most? I enjoy every single one of it because all of them are different, with new clients and at a specific time. My philosophy is to enjoy each one on a 100%, as if it was going to be the last one.

And the one you feel the proudest? The building I painted that I called Villa Allegra in Salem (USA). My wife and I had not yet found a name for our daughter and it was with this project that we came up with it. We named it after her. 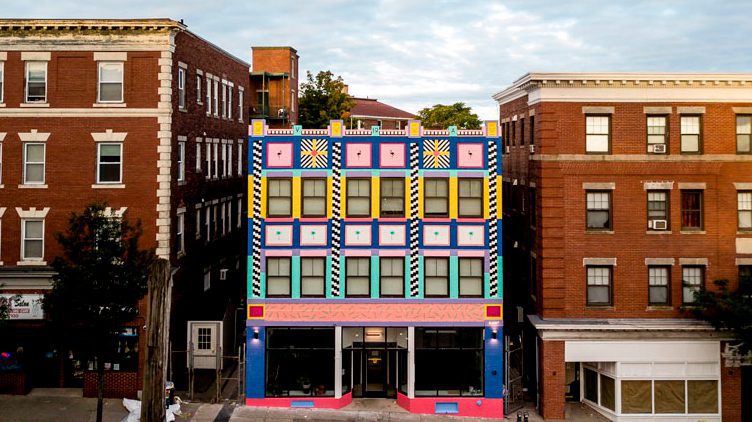 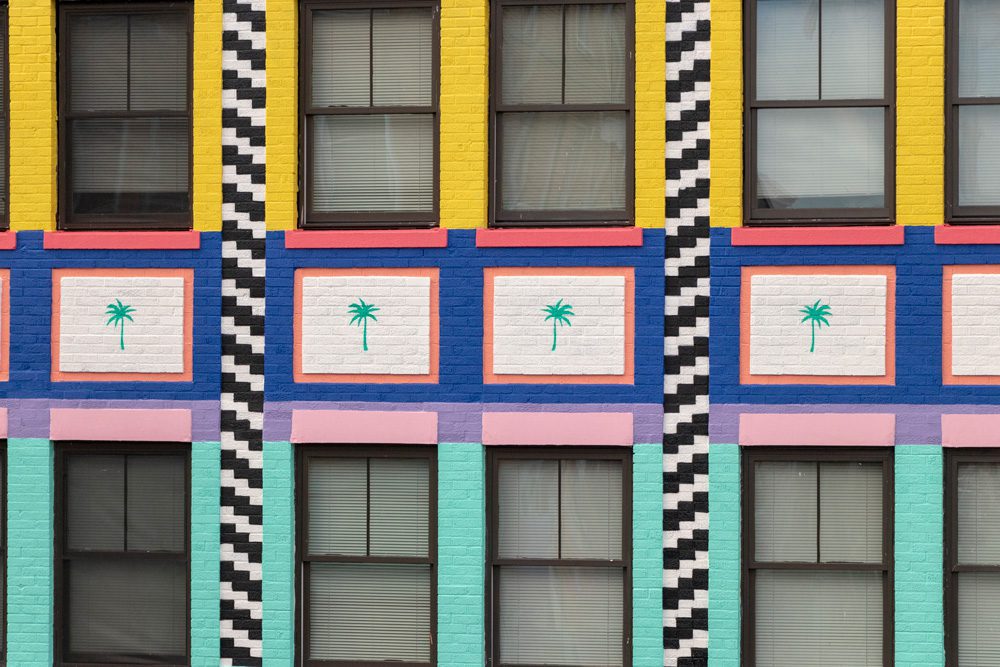 An funny fact at work? When I was in Egypt about five years ago, I painted a wall and didn’t take a picture of it because it was already dark. When I got up and went back to take it, the wall had been taken down.

A turning point in your career? Coming to live in Madrid. I lived in Alicante and when I arrived, I didn’t have a very defined style yet. It was in 2013, while sharing studio with Okuda and Rosh,and I’d realized about the patrons and repetitive style in what they did. I was not constant and from then on, I focused on that.

Did you have a mentor? As such I haven’t had one, but I’d say my father. He taught me that perfection is something very important in the artwork and that things well done once don’t need  to be done twice.

Your work in three words… Architecture, design and nature. 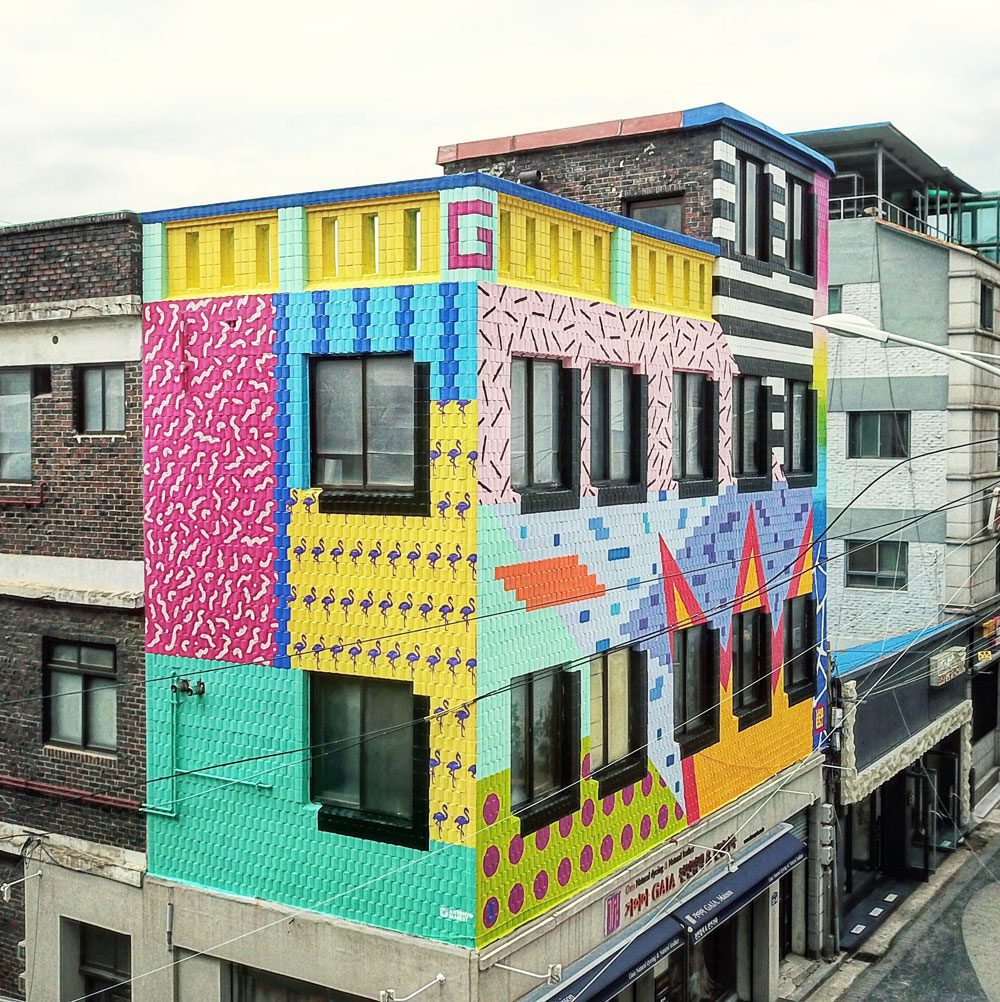 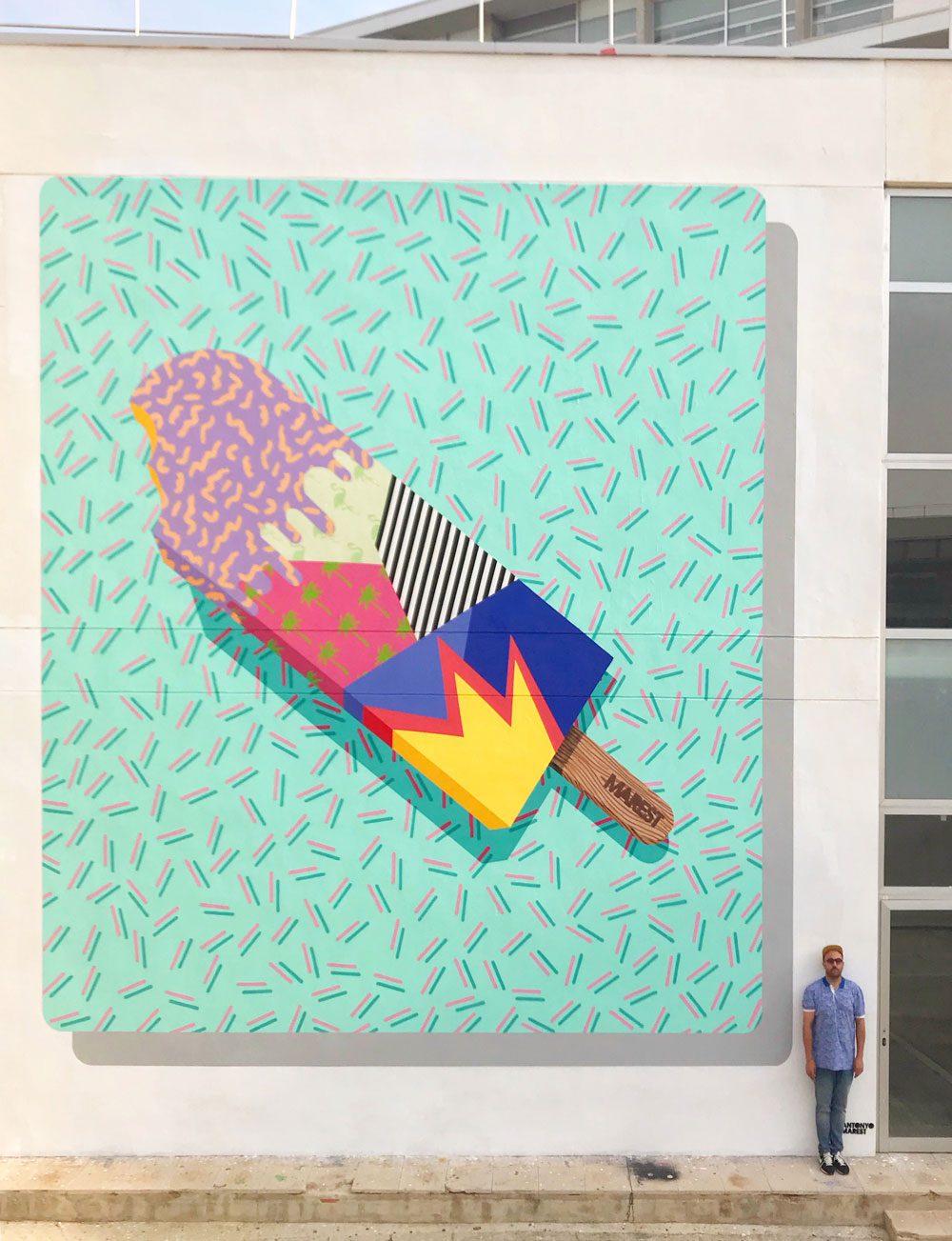 And your personality? Punctual and squared. I like everything to be ordered and to follow a straight line. I really admire people’s sincerity; I don’t like to step on a soft spot.

A place to paint… I loved and hated India at the same time. But every time I do something there the contrast is brutal, the whole landscape changes, there’s nothing within 100km. 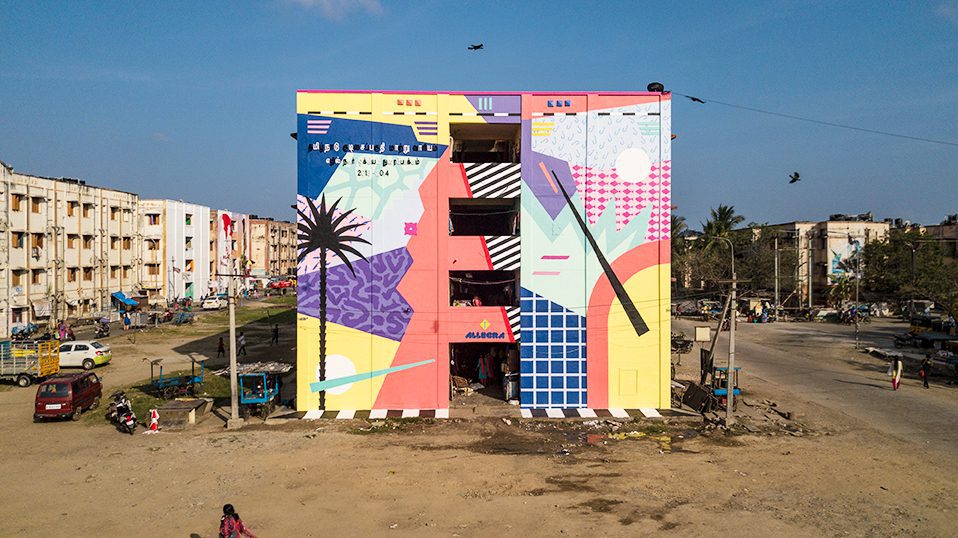 A special spot for you… Somewhere by the sea. I have a saying that if you and I get in the water right now we’re the same, we can’t measure anything. It doesn’t matter if you have one euro or one hundred million, inside the water we are equal. Another place is New York, the city that’s always changing.

The last book you read… “Art Deco in Madrid”, it takes you on a tour of a Madrid that hasn’t been explored yet. Madrid has a lot of magic but sometimes it can be very hidden. 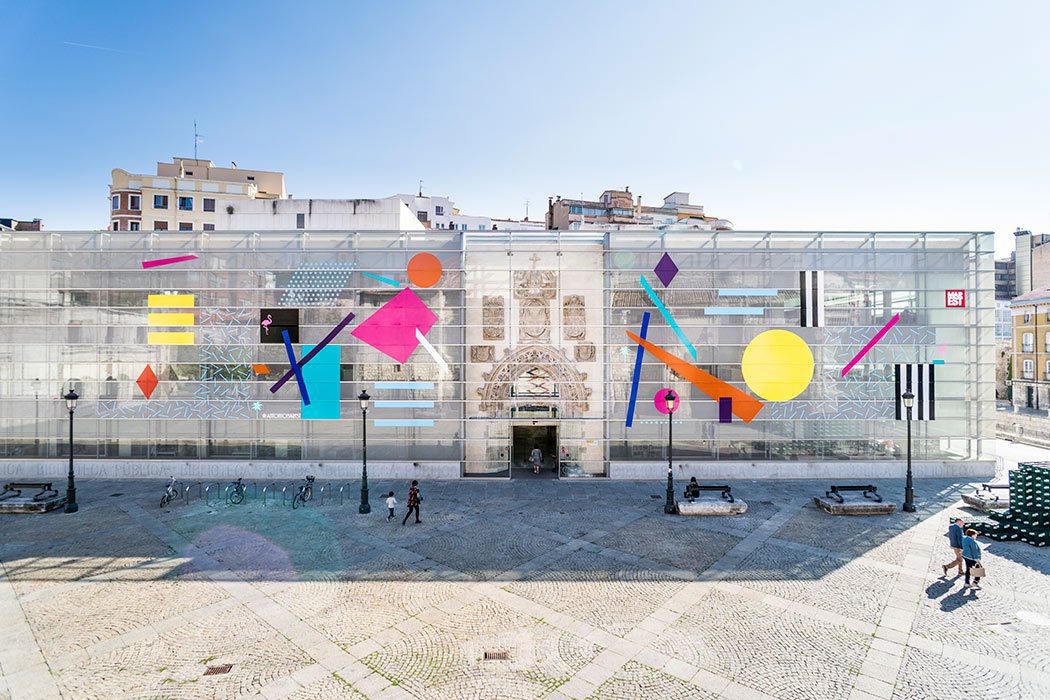 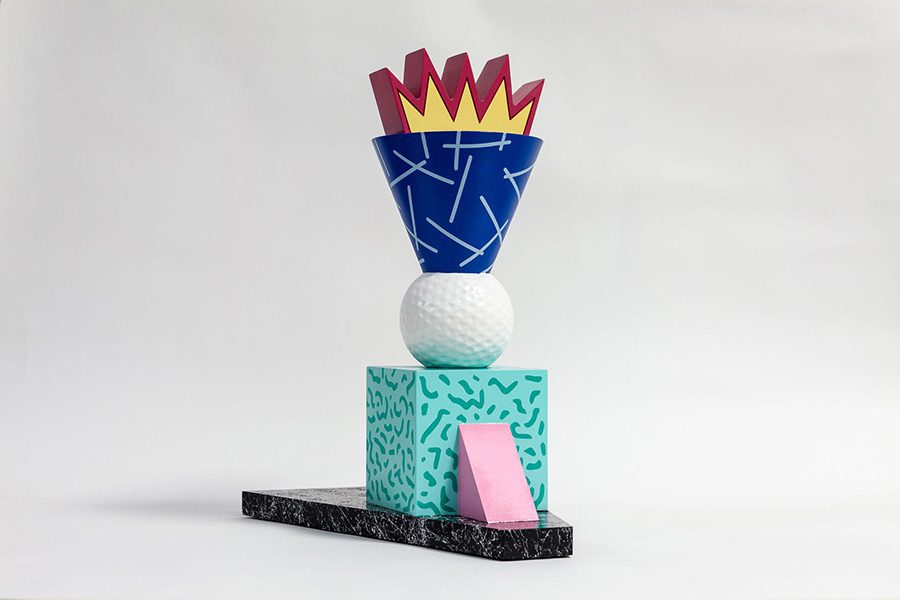 A movie? I was crazy about “Scarface”, from the ‘83, with all those sets, the cars, the houses, the costume… It left a mark on me.

A series? “Miami Vice” is a reference for me when it comes to colors, shapes…

What music inspires you? While I work, I can listen to almost everything but one thing: under any circumstances I will play any reggaetón or commercial music.

A Museum or Art Center… The MoMA is like the library of Contemporary Art for me. It has a lot of artistic strength and it’s the gateway to our world.

A special painting for you? Dali’s ‘The Persistence of Memory. Another very punctual artist. Before seeing it live I thought it was gigantic and when I saw it at the MoMA that it was the size of a sheet of paper I couldn’t believe it. That painting makes me see how the concept of time doesn’t take up any space, just like wisdom. Dali was a genius at doing that, creating a micro-painting thatlocks up time. 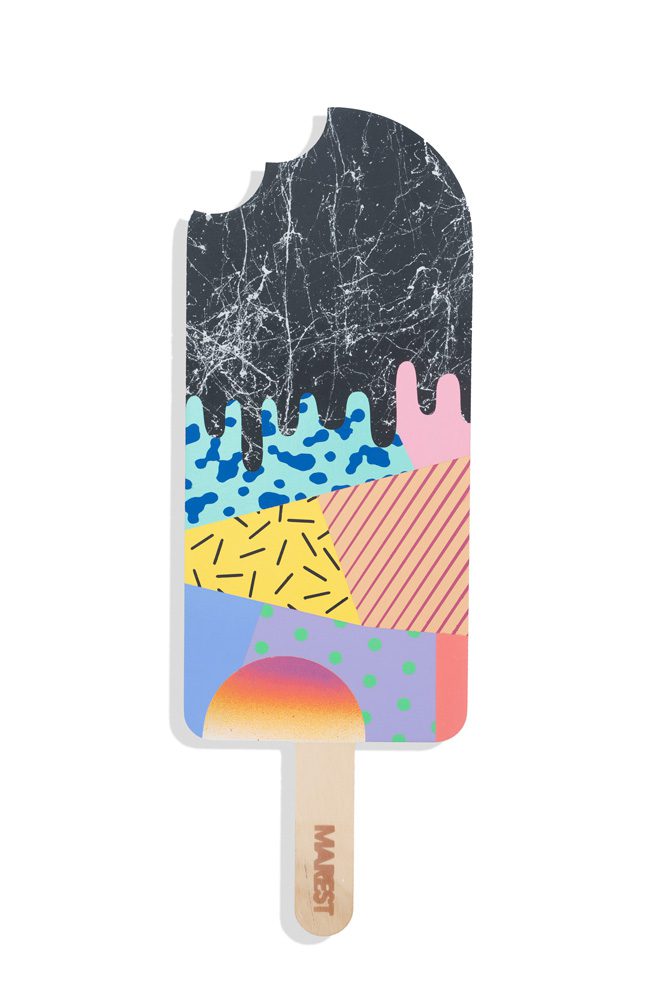 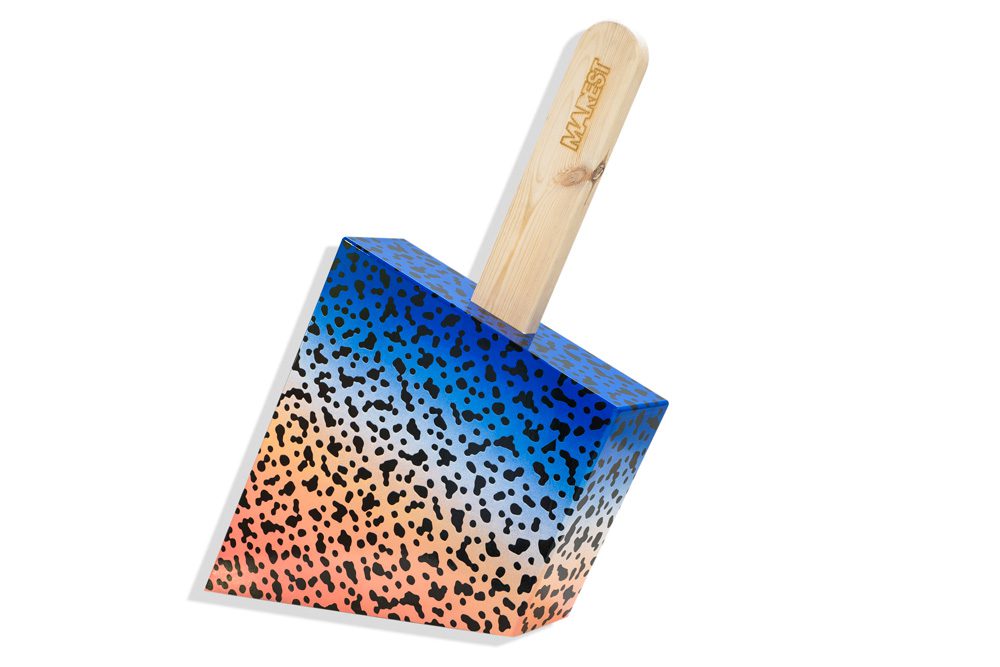 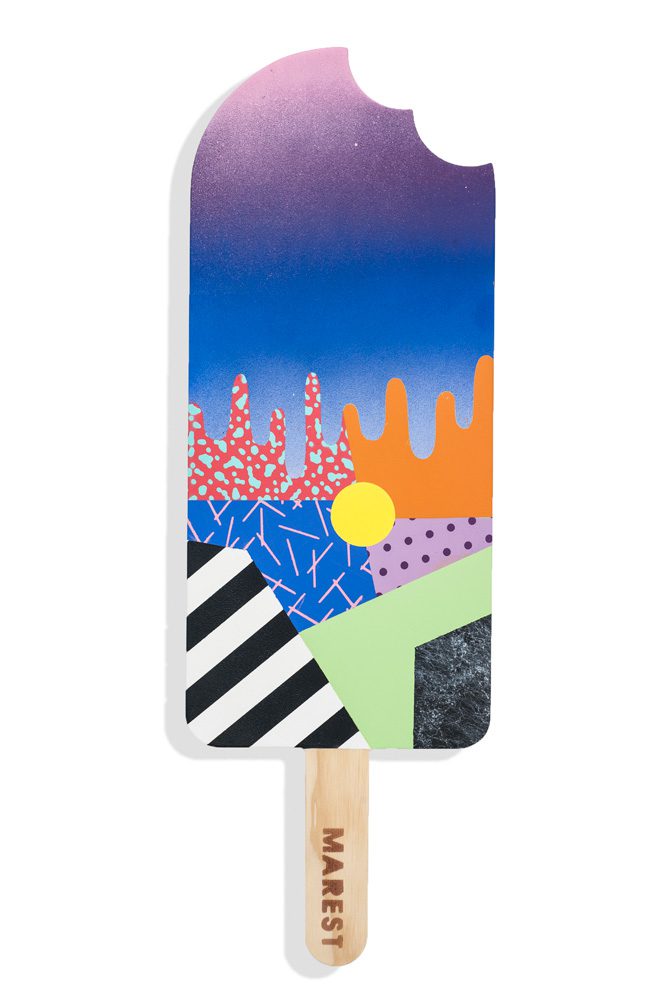 A wall? I’d say the New York wall of Hudson Bowery Street. That wall is a representation of what has been going on in the street art world for the past decades. Every artists painting there is so powerful.

A bar where to find you? I’m not a person who has a regular bar, I’m easy to have a beer with. I don’t care where but with who.

If you had to chose a meal? I’ll always say the world’s greatest artist’s commandment is pizza.

What do you fear? I’m not afraid of anything special, but I’m concerned about the future that lies ahead and that my daughter is safe in it.

Any fixation or obsessions? Every time I go on a trip the studio has to remain as good as new. Picked up, cleaned, scrubbed and everything. 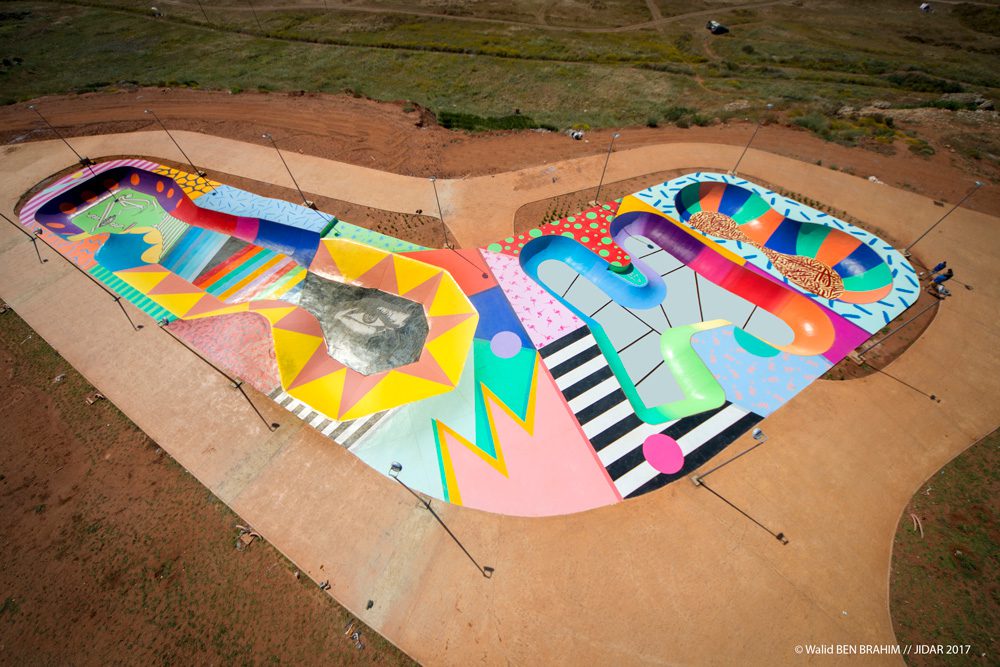 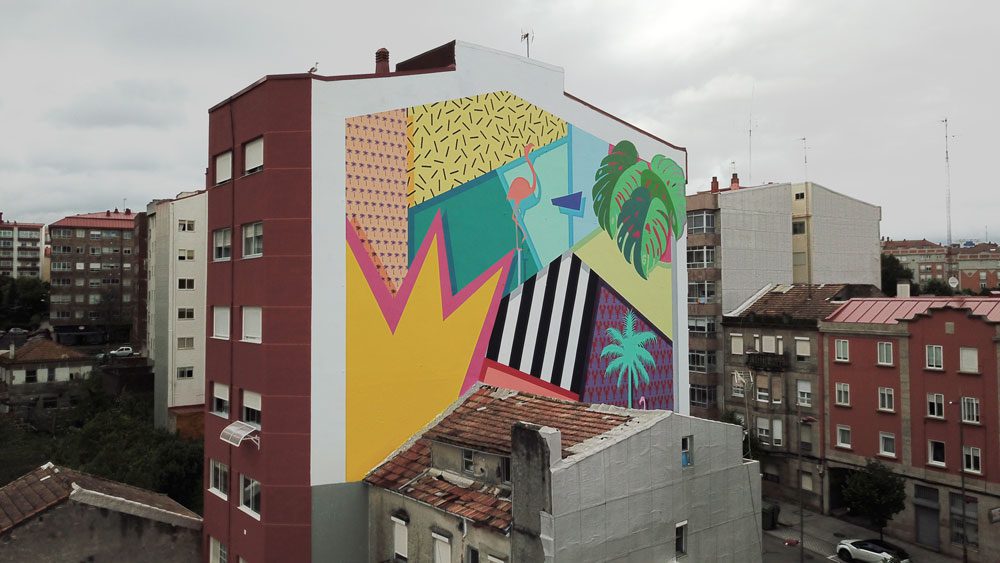 What can’t you stand? The lack of punctuality. The first time it’s ok, the second one well… But the third time… Forget about me.

Alone or in company? If the situation calls for company, I’ll be there, but many times, to create, I prefer to be alone. I’m very manic when it comes to creating, I don’t want to be interrupted.

How do you waste your time? I’m very curious and spend a lot of time looking for things on the Internet. During the quarantine I was obsessed with air paint and now I got fourairbrushes!

A goal… To be able to continue living from my art and grow in a constant way. No rush but no pause. To be able to tell people the day of tomorrow how did my generation began to do all this.

What are you working on right now? I’m going to paint a wall in an hotel in Alicante and a wall in a client’s house in Altea which will be very special because it will be held by magnets. She says that if she ever wants to move, she wants to take the wall with her. Then I’m going to Ibiza to paint a villa and almost the whole month of August I’ll be in Italy in the Veneto area painting two villages. 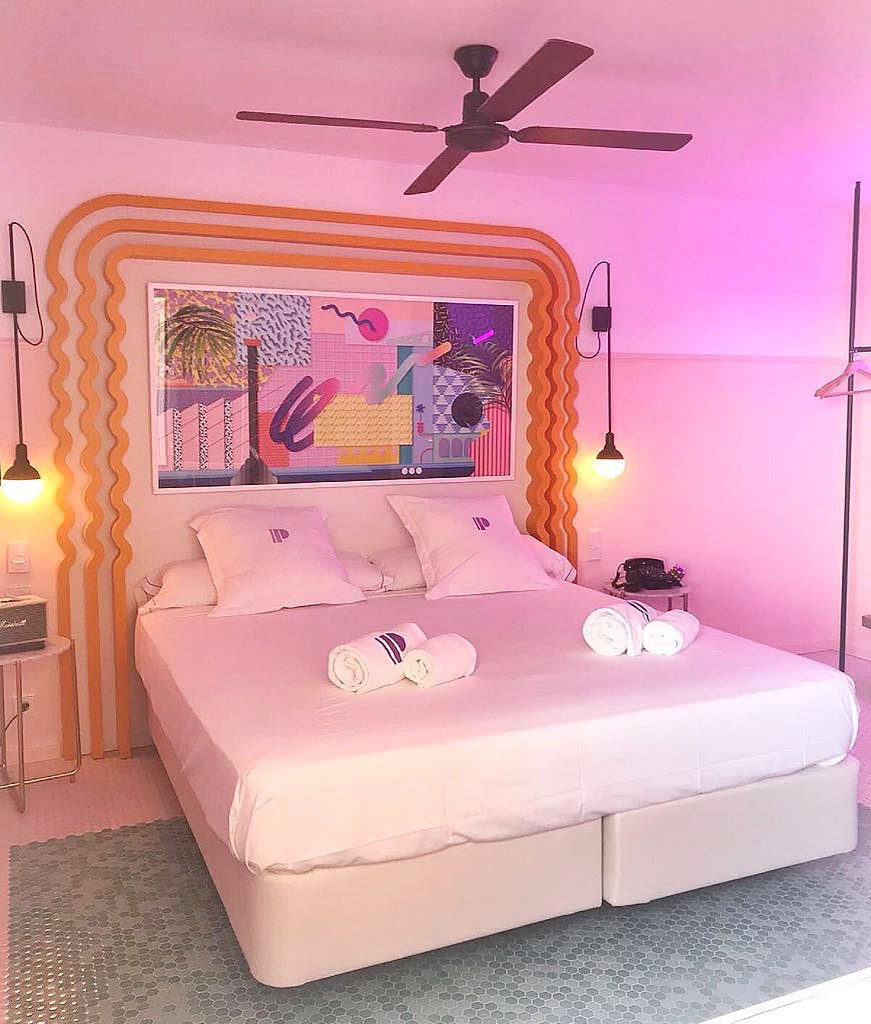 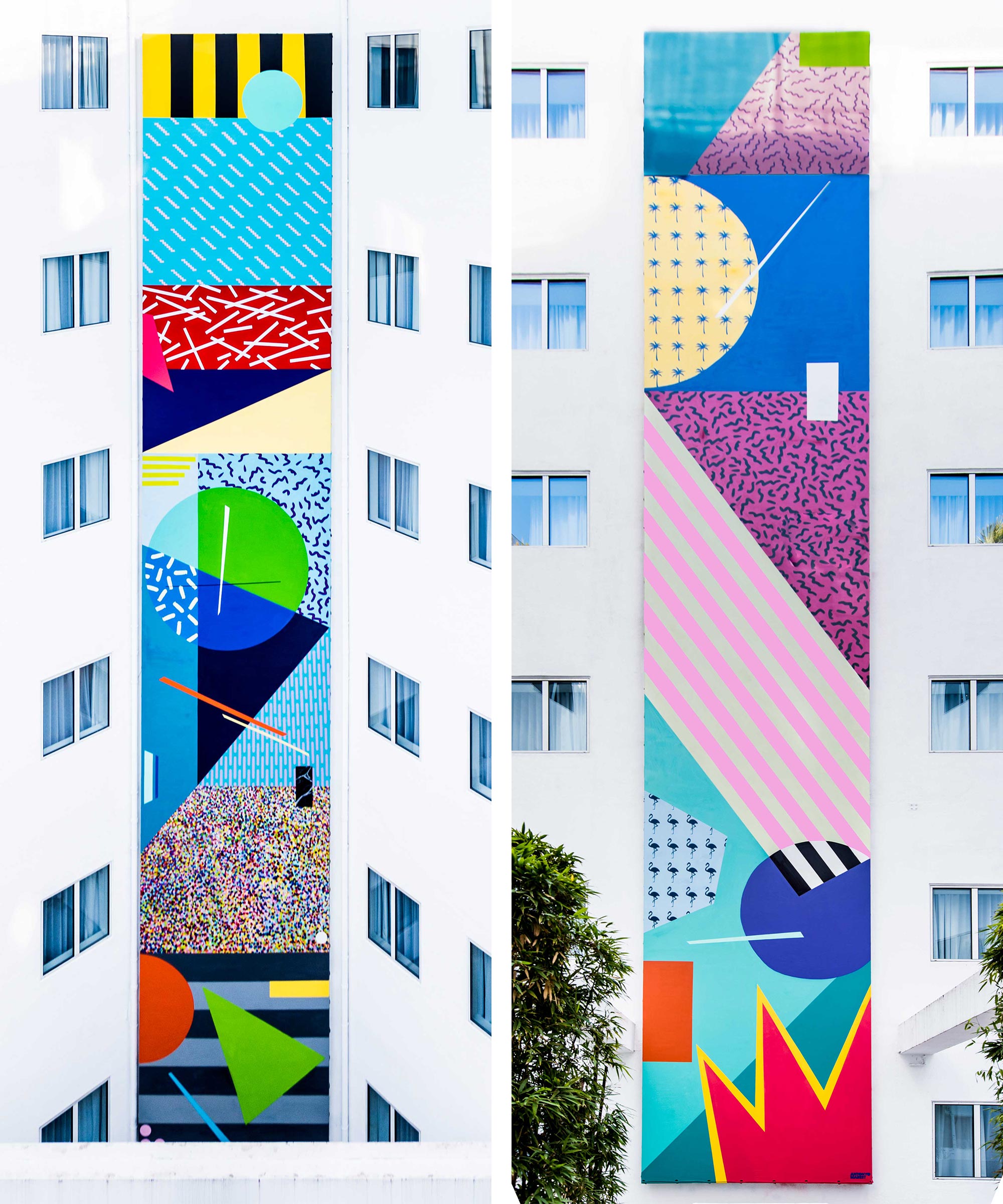 Your ideal future… To have my studio facing the sea.

A mantra… “Step by step you reach the top”.