Ampparito: a personal tour through his latest exhibition 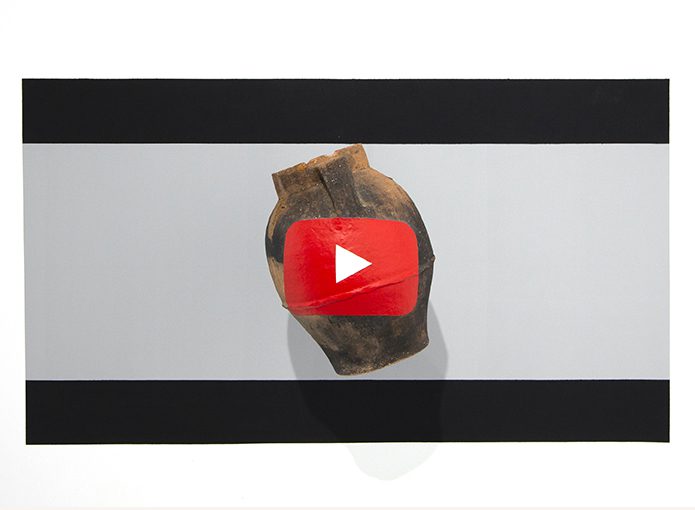 «When Manuela and Pablo invited me to present my work at La Causa Galería this past June I came with a first idea that was much more installation-oriented. As everything had to be delayed, I considered it wouldn’t make much sense for me to stay into that concept and realized the exhibition would be very conditioned by the physical or virtual presence of an audience. So I decided to focus this new body of work on the presence of an spectator and how does it impact nowadays on any artistic discipline seeing something in person or through a screen», says Ampparito (Madrid, 1991) about [2020] [TS-Screener] [ESP], the exhibition that opened last Friday, November 6th, at La Causa Galería in Madrid. His personal challenge? To bring the work he does in public space to the interior of a gallery and to and exhibition format. A conceptual work in which, based on observation and study of the context and the space where the artist acts, he is able to give a turn as unexpected as effective to a reality that we all see and that only with a sharp and refined eye he observes.

It was after these months of pandemic, when telephones and screens became our window to the world, that he thought of making an exhibition with two different visions: the exhibition changes if you see it live or if you see it through a screen of a device. Taking the TS-Screener format (used to record films with a camera inside the cinema and then share them on the Internet) as his conceptual line of work and the subjective vision of it, the artist guides us through an exhibition between the analog and the digital, the rural and the technological barriers to, once again, blow our minds leaving no one indifferent. If you are in Madrid you have until December 4th to go see it live, if not, go check below what Ampparito can explain you about it.

With the Madrid artist, we stat a series of articles (or personalized tours) where the protagonists, through their words, let us enter their heads to learn about their most recent exhibitions from the inside. Travelling has become more complicated in the last few months, but art is still alive and hanging on the walls of the galleries. Let’s not forget about that and let’s keep growing. 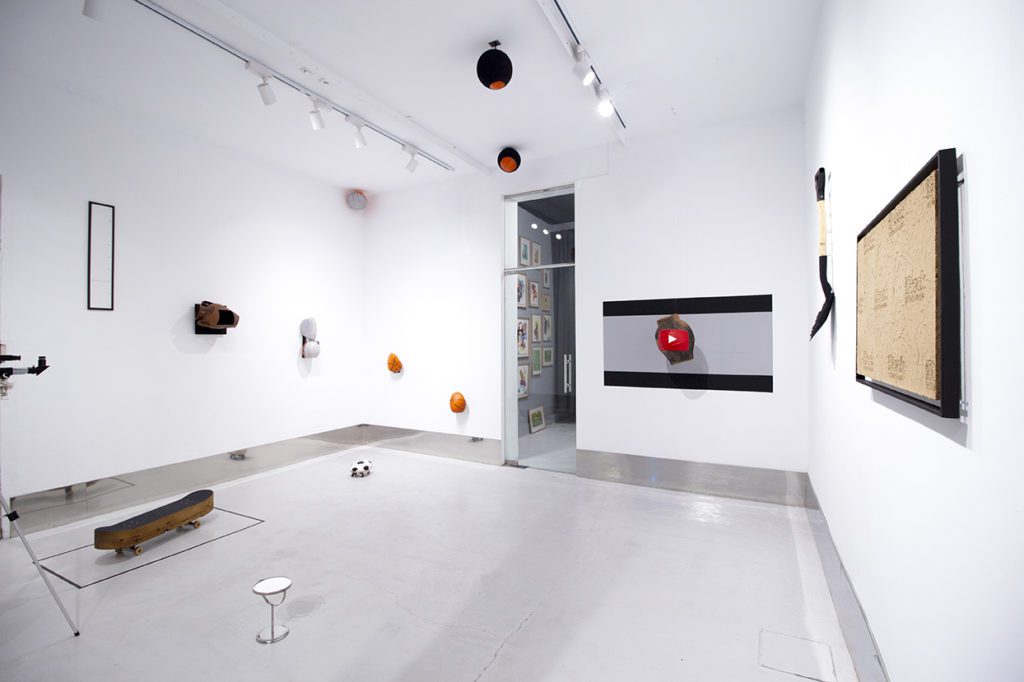 «The copy of the copy so that something can be shared after is more and more recurrent. It’s a way of stealing something digital, recording through the screen itself. It’s not even necessary to have the file», says about the TS-Screener format. «And it’s now, when we tend to see reality in a ‘screener’ way that we have to intuit reality through the two dimensions of a screen: if something is small it means it is far away, if something is big it means it is close… However, the person who makes that ‘screener’ has a lot of power to manipulate what happens», he continues. «This initial thesis is linked to the ‘price’ we pay when we share something in a digital way, which means a decrease in its quality, what you share is no longer what it was at the time it was converted to digital format,» he adds and an introduction to it. 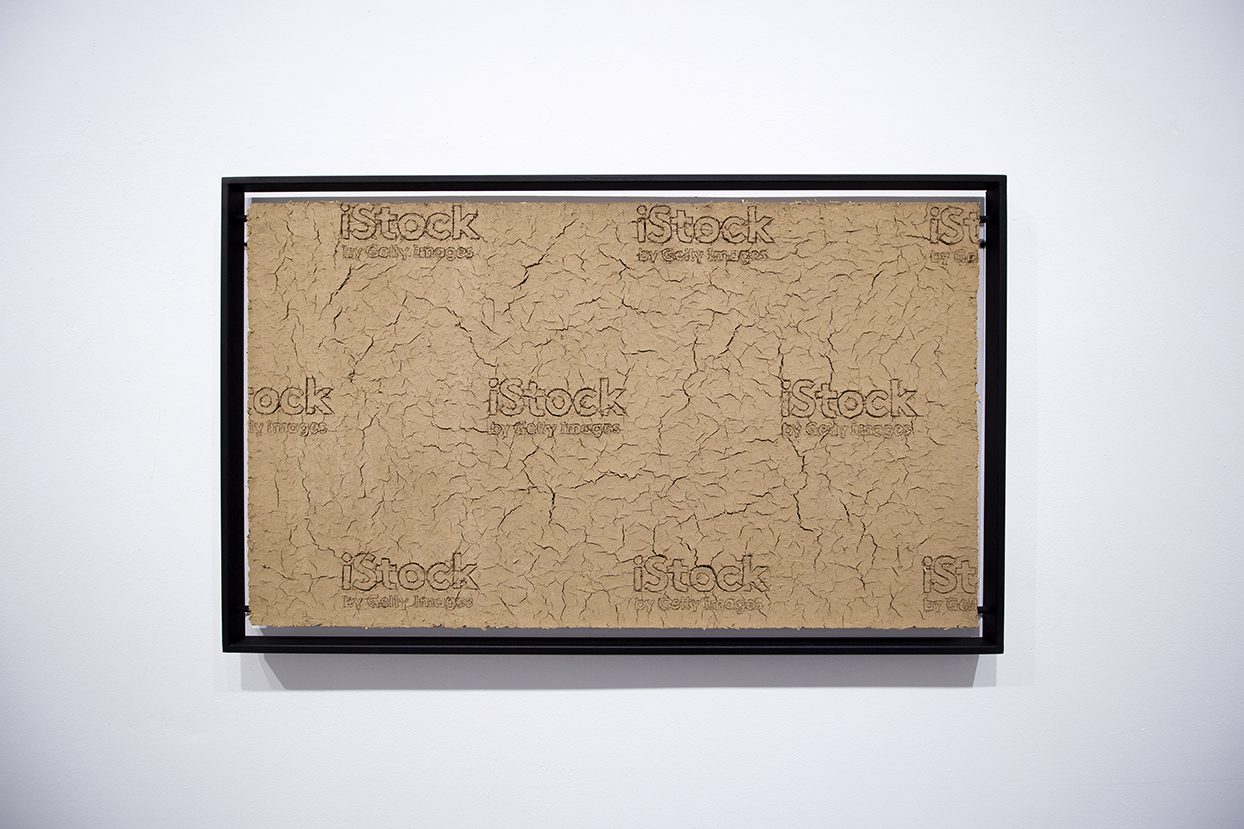 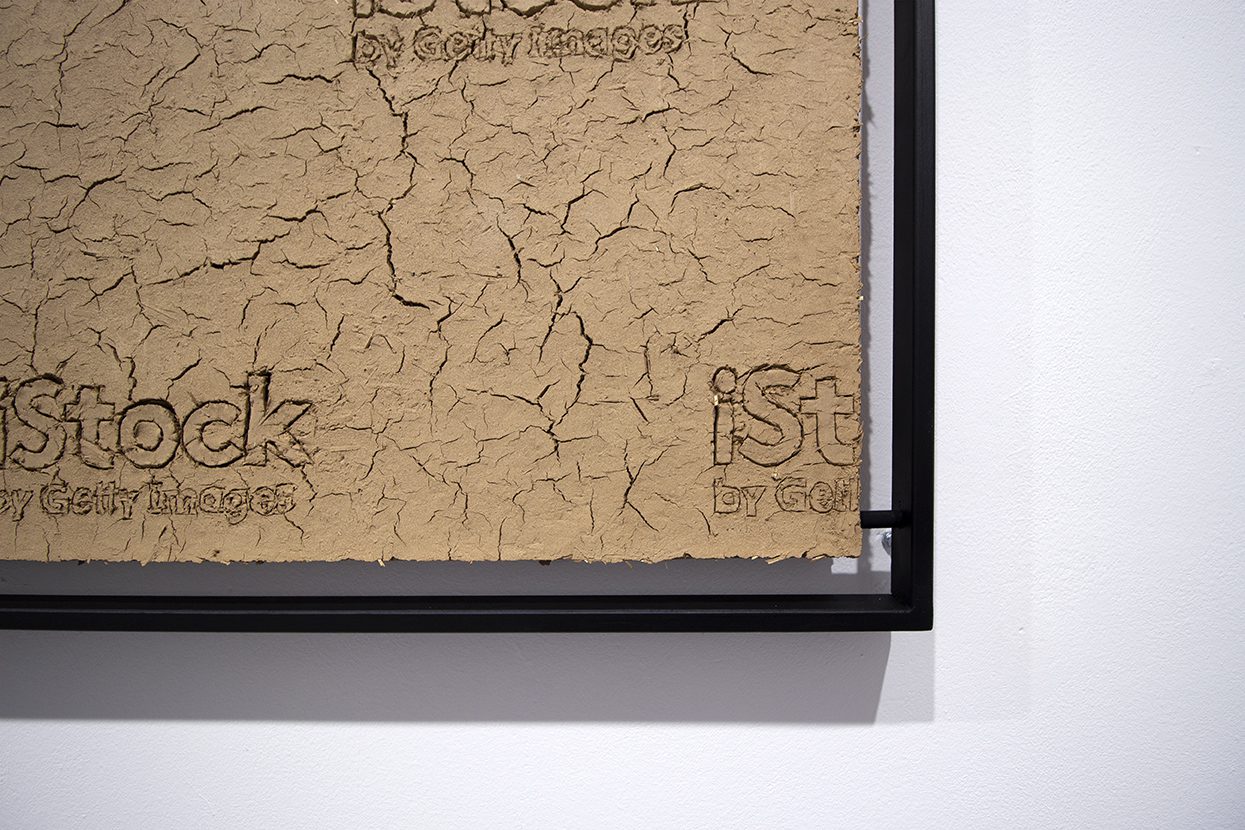 «This is a processual piece that I did at my family hometown. So I go for a walk, take some soil -about 20kg-, and take it to the studio. I put some water in it, I beat the mixture well to make mud, I put it in a mold and with a scalpel I make some incisions in such a way that when the mud dries out it cracks, letting you read what I have written: in this case I used the name of the iStock image. Somehow what I am doing is a literal watermark, it is the real witness that the water leaves when it dries. Once it’s done I return the block of mud to the place where I took the soil, I place it in the hole, I take a picture of it and I upload that picture with the real watermark done by myself to the image bank. What happens when I upload the photo is that to protect it, the image bank puts its own digital watermark on it. There is a contrast between that real watermark made by the water and the digital one inserted by the image bank». 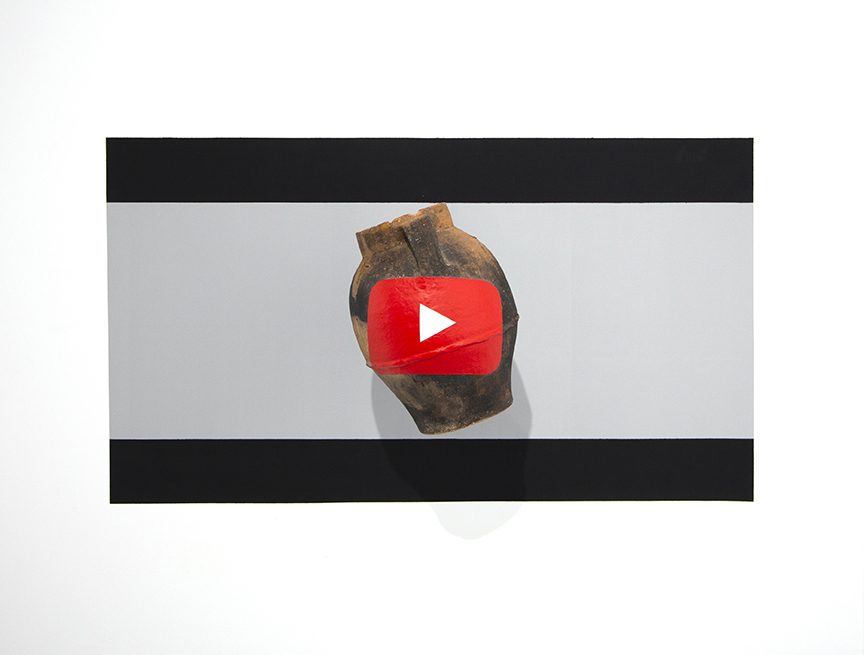 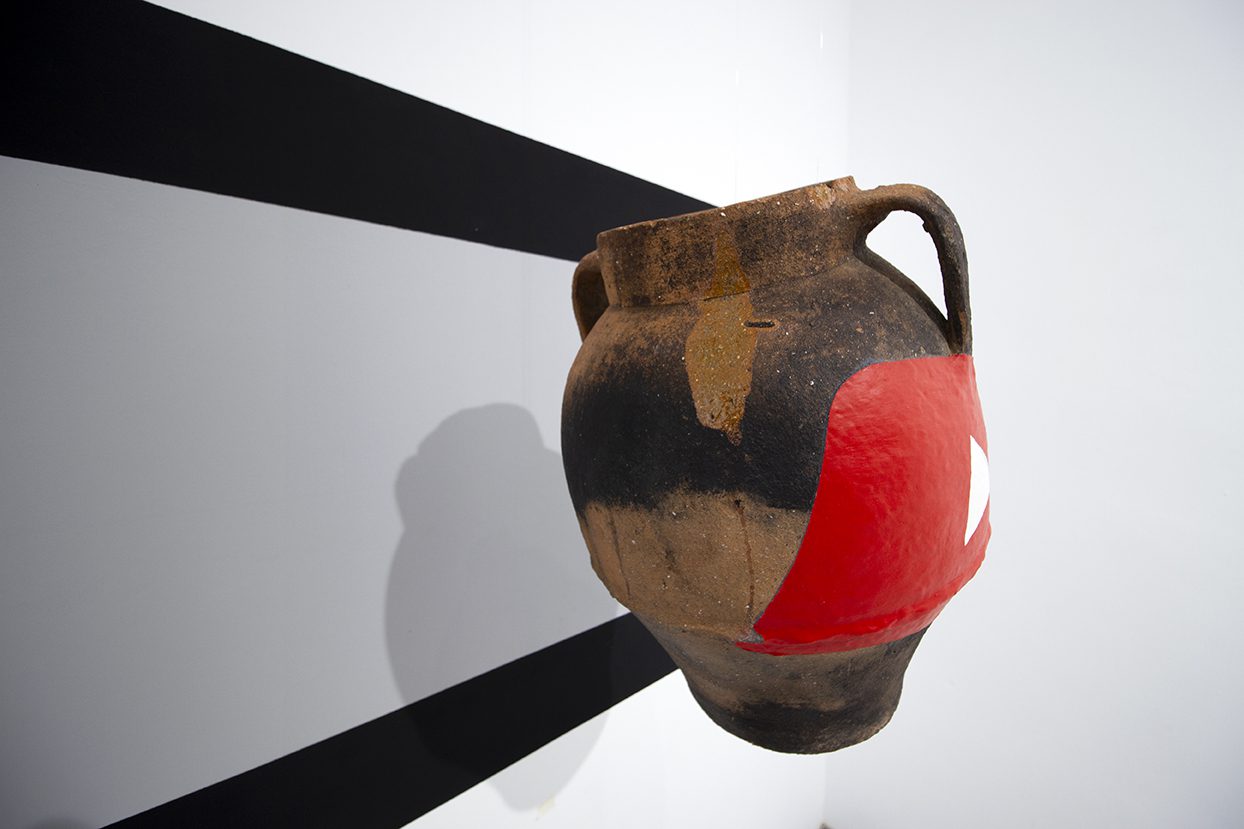 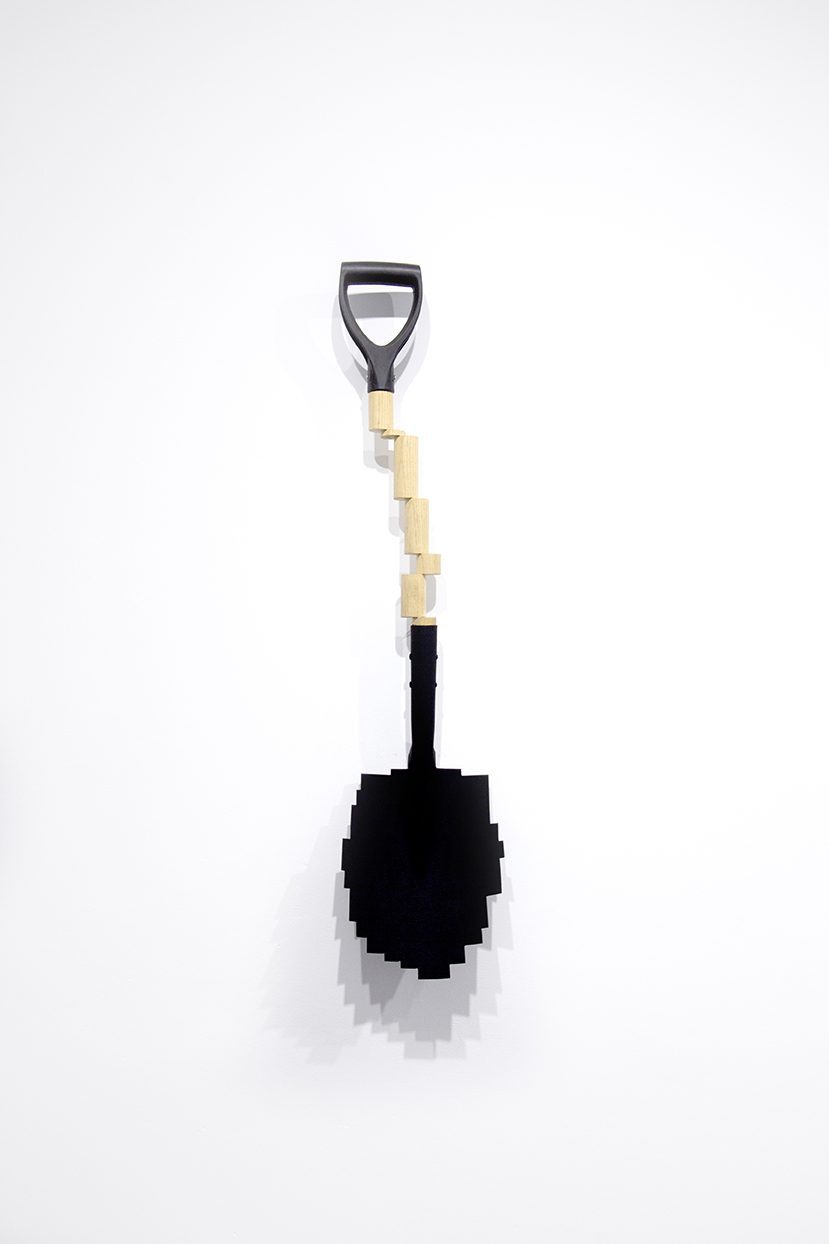 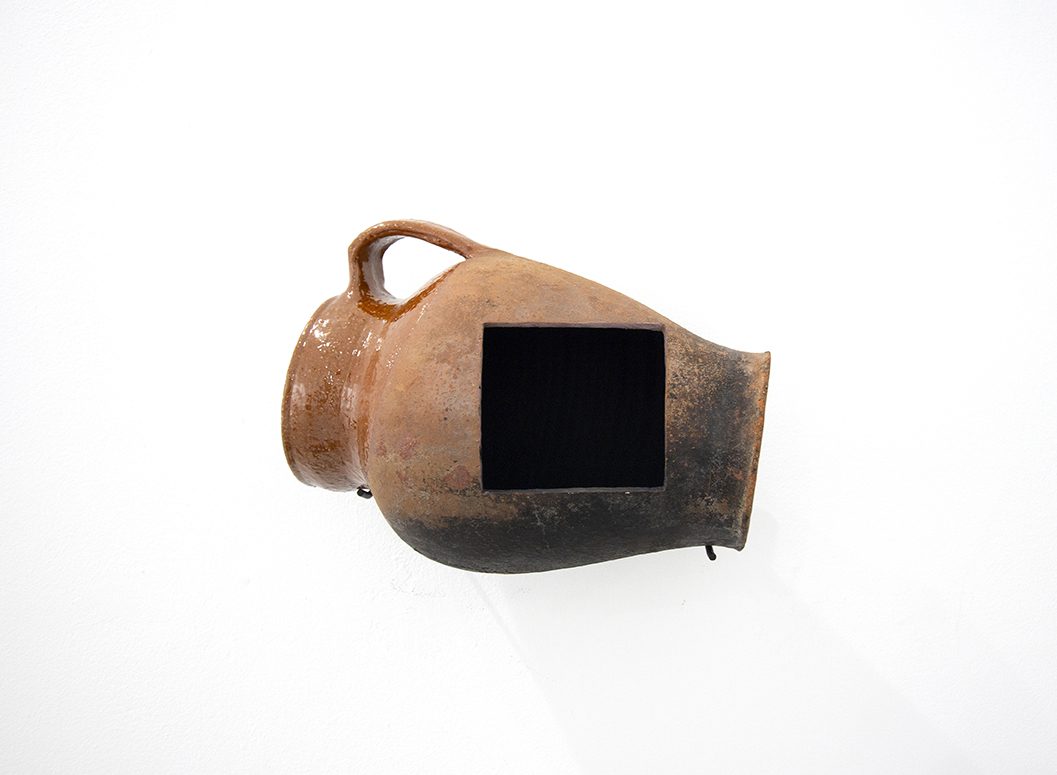 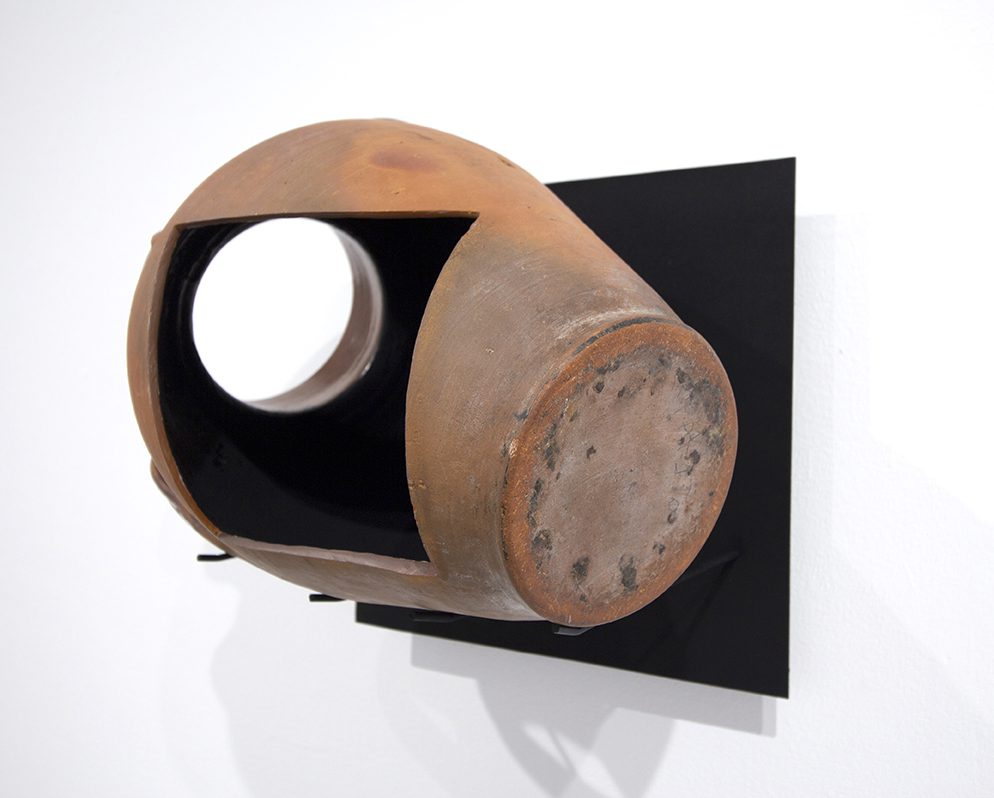 «These are formal exercises of properly digital elements made in analog model and that through the screen of the 2D phone go back to the digital world. If you watch the Youtube piece live it looks like a set, you see the separation between the piece and the painted wall, but at the moment you take a photo or a video it becomes a Youtube video that looks real [photo 1&2]. The same thing happens with the shovel, which looks like a glitch seen through the camera but when you see it live it’s clear that it is not, that is just a cut out. The moment you use a screen you lose quality, it becomes something in 2D and that magic comes back to the digital world. The pot has a perfect square inside and it is an anamorphosis: when you see it from the front it looks perfect but as soon as you move you see that it is cut out and that it is curved, that the pot is not flat and that the square is a rhombus and stops being flat to take volume in reality». 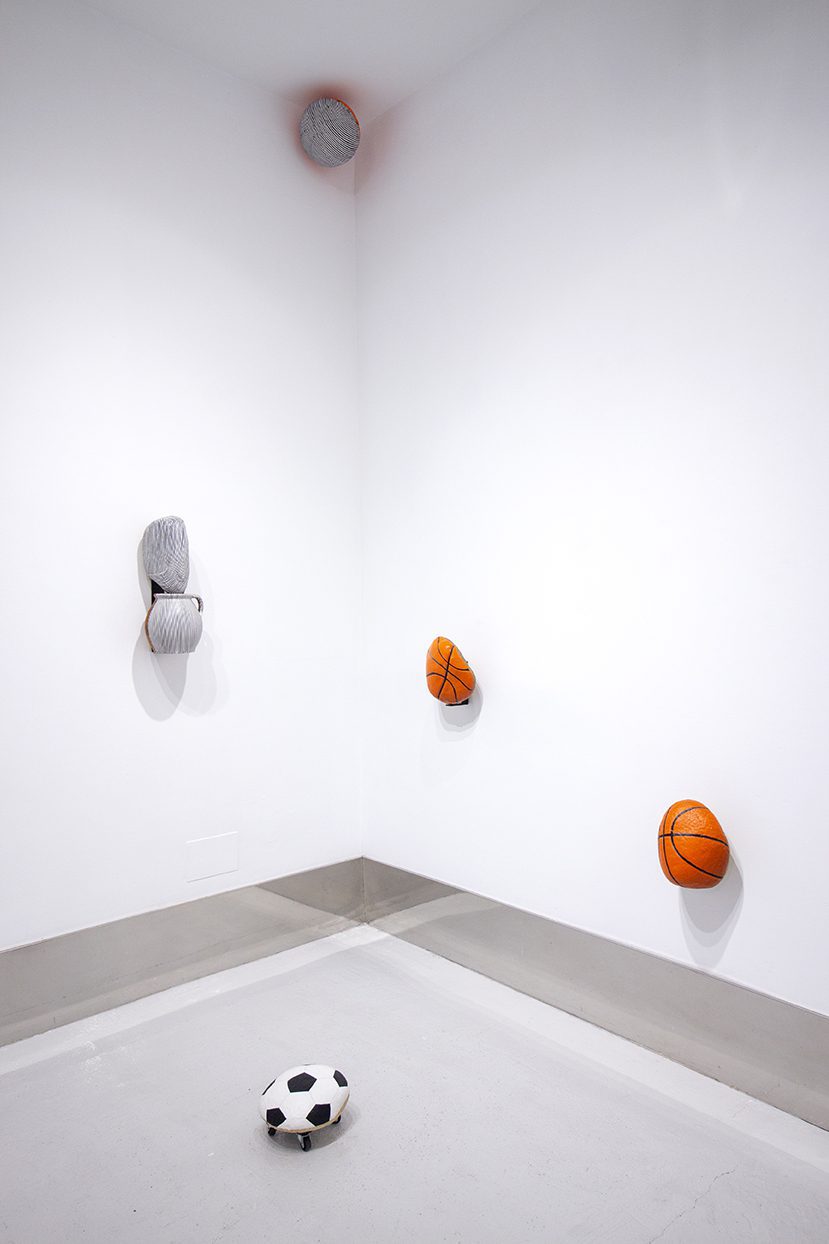 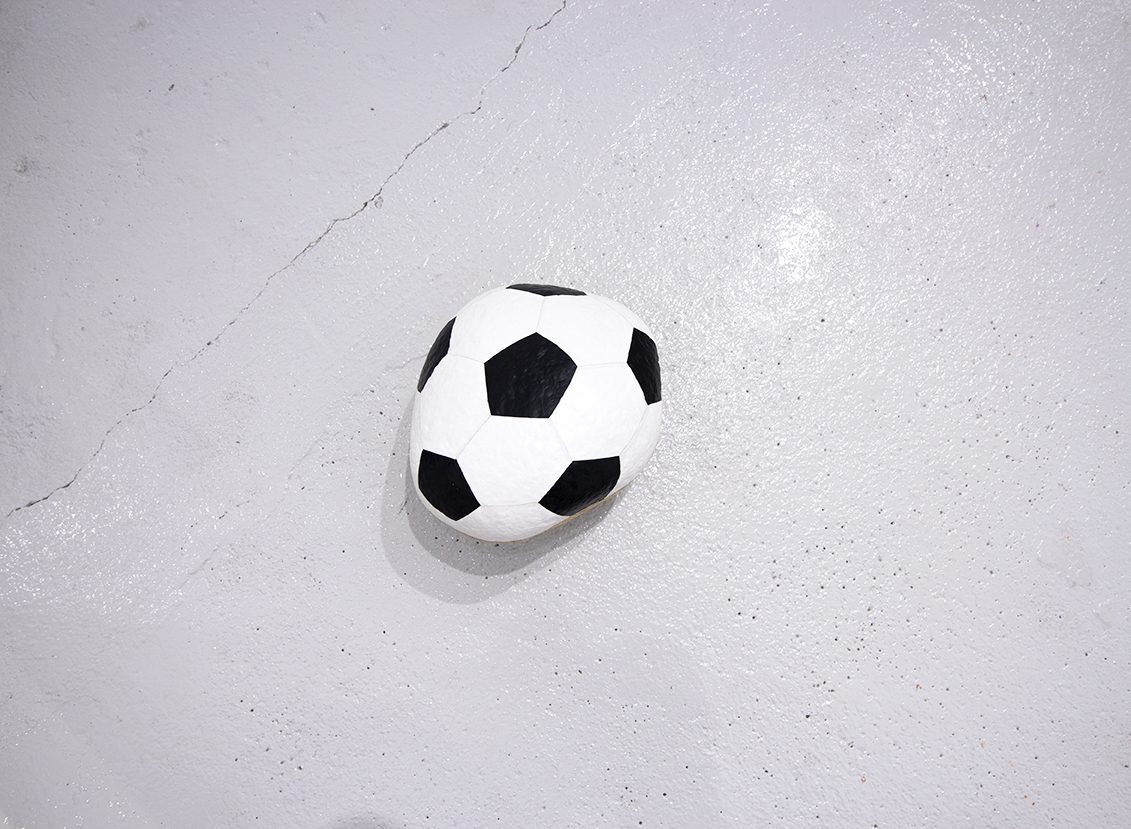 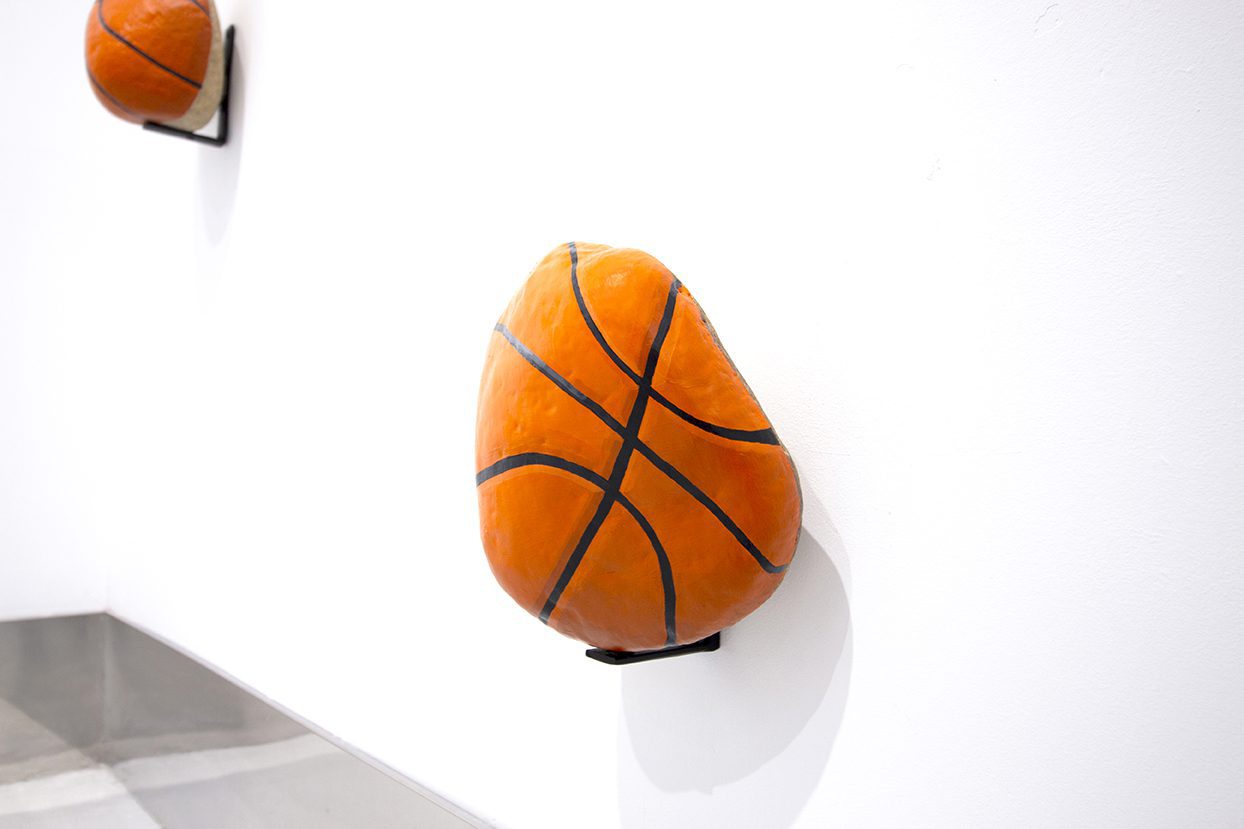 «These are a kind of rural augmented reality. Through the screen you are seeing elements that with your eyes you don’t see and that through our phone they appear in the room. They normally are super contrasted elements, they are not material, they are not heavy and they look digital, it is nothing that has density. If you see them through a mobile they are floating, but when you are physically in front of them and you get closer you see that these balls really are 10kg stones. There is a brutal contrast between seeing it through a screen and seeing it in situ. The same thing happens with the ball in the floor with wheels: seen from a zenithal angle it looks like a soccer ball. It weighs so much it can only move in two dimensions, the third one isn’t possible, you can’t kick it to make it go up». 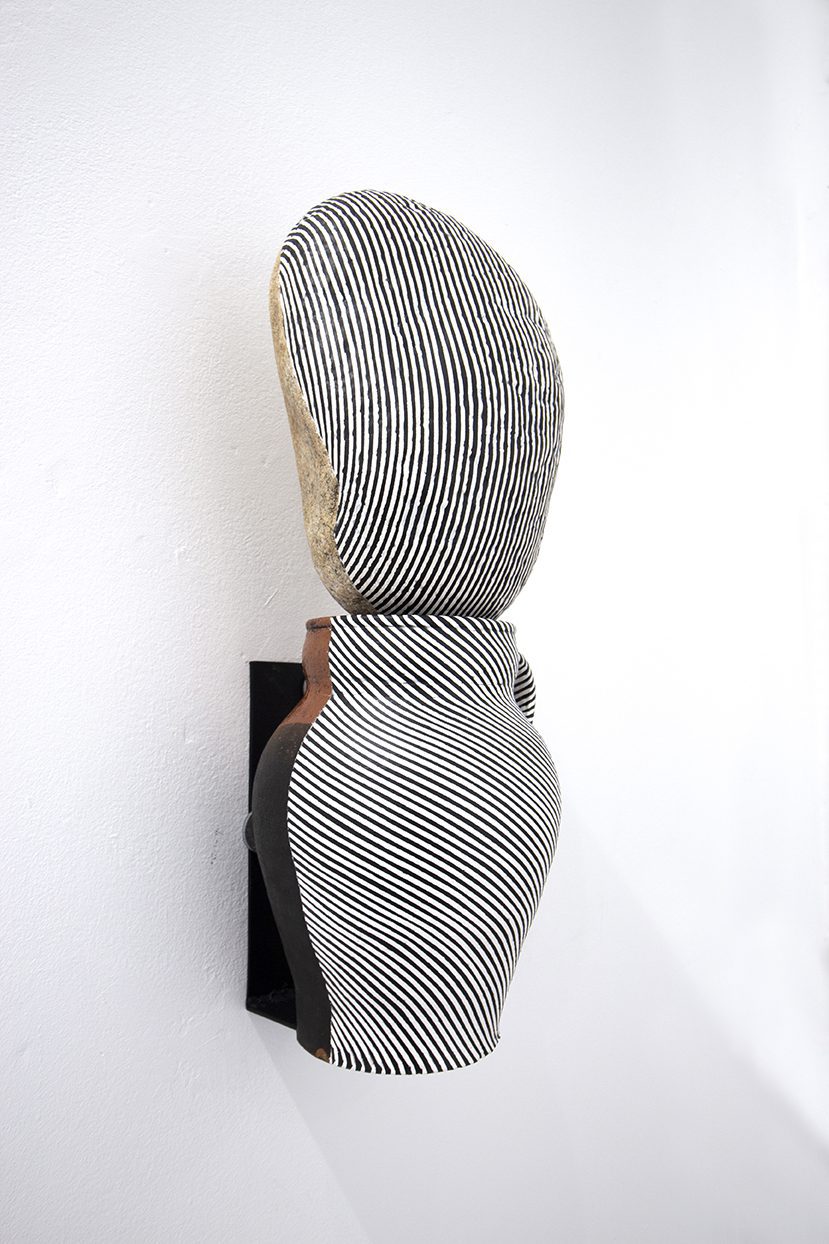 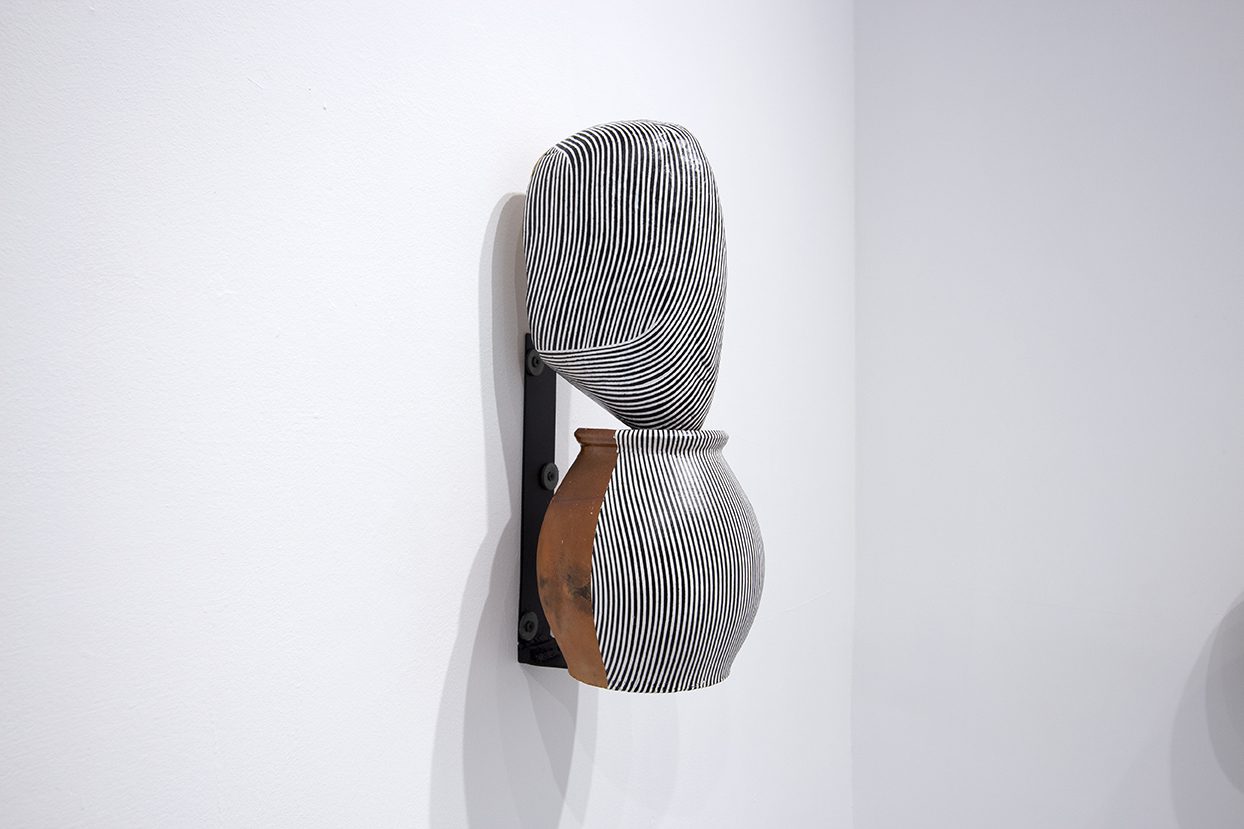 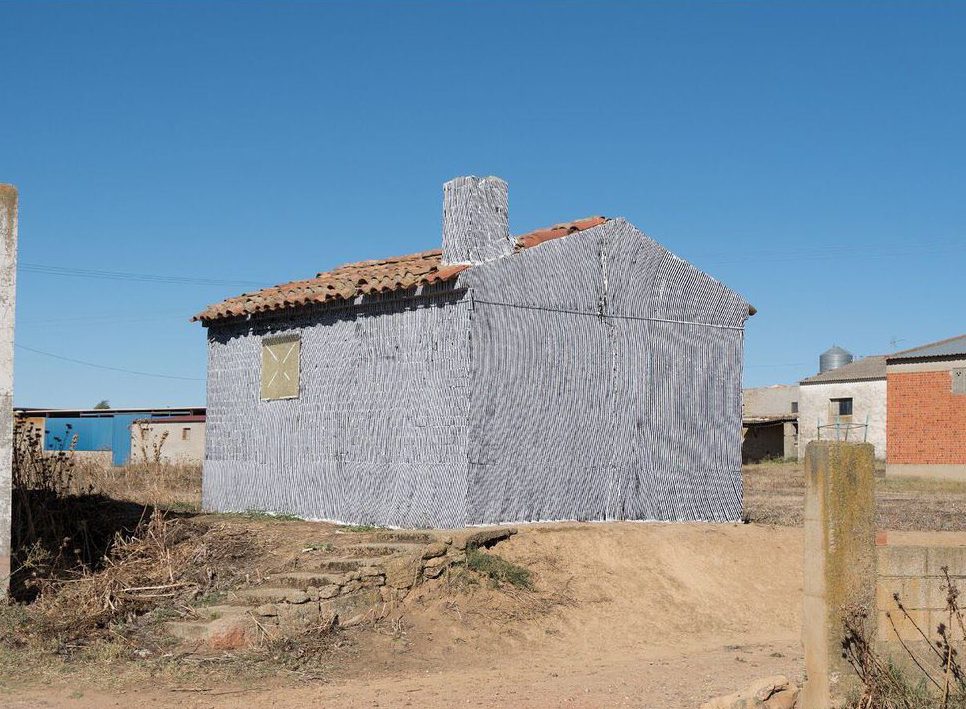 «This piece is an idea that I had in mind for quite some time: now that almost everything that is done on the street is photographed endlessly I wanted to make a mural work that could not be shared digitally because the moment you do it, let’s say it “stops working”. So what I did was that I painted almost an entire house with this ‘moiré’ effect. Because of the squared pixels that represent any image in a screen what happened with these curved lines was that the screen had to choose what to represent between the black and white lines. In that hesitation of the camera there is a flash effect that you can see when you make a video and distorts the image. As soon as you start sharing that video the pixels stop being black and white and some become grey due to that loss of quality… The third time the video is sent it becomes a grey element, and it stops being the work I did. In reality, all this comes from a type of camouflage called disruptive, which instead of wanting to not be seen, what you try to do is not to find out its shape of the element and distort it. New prototypes of cars that need to be tested in the roads before going out into the market use this kind of paint so their design is not copied. And the same goes for World War I ships, so that when submarines shot at them they couldn’t anticipate the course they were taking». 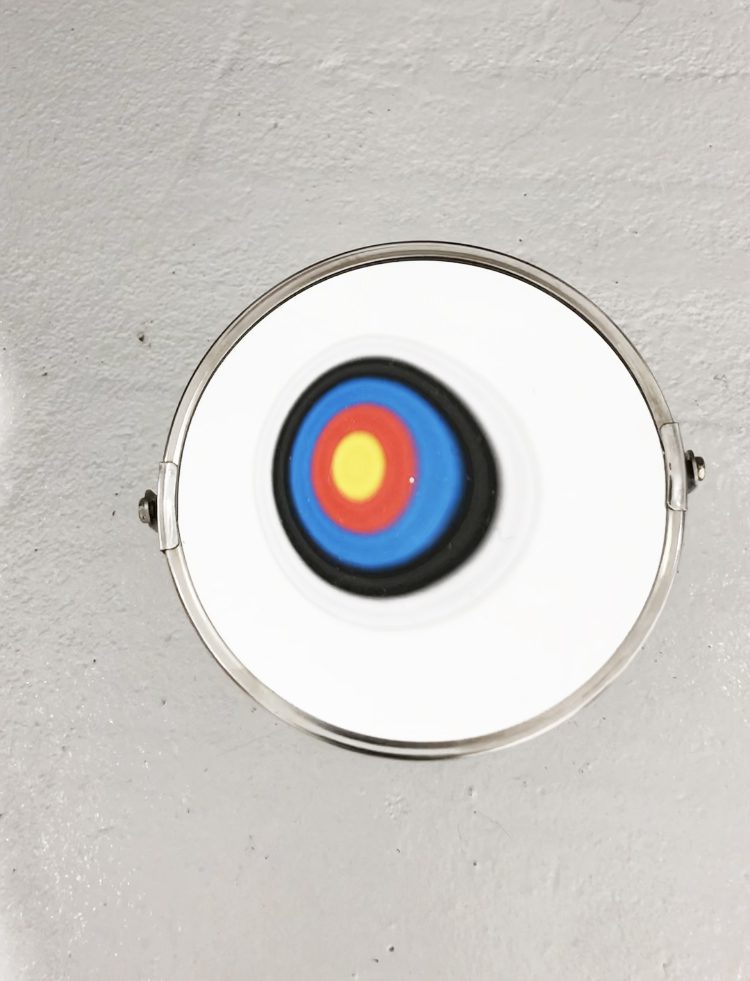 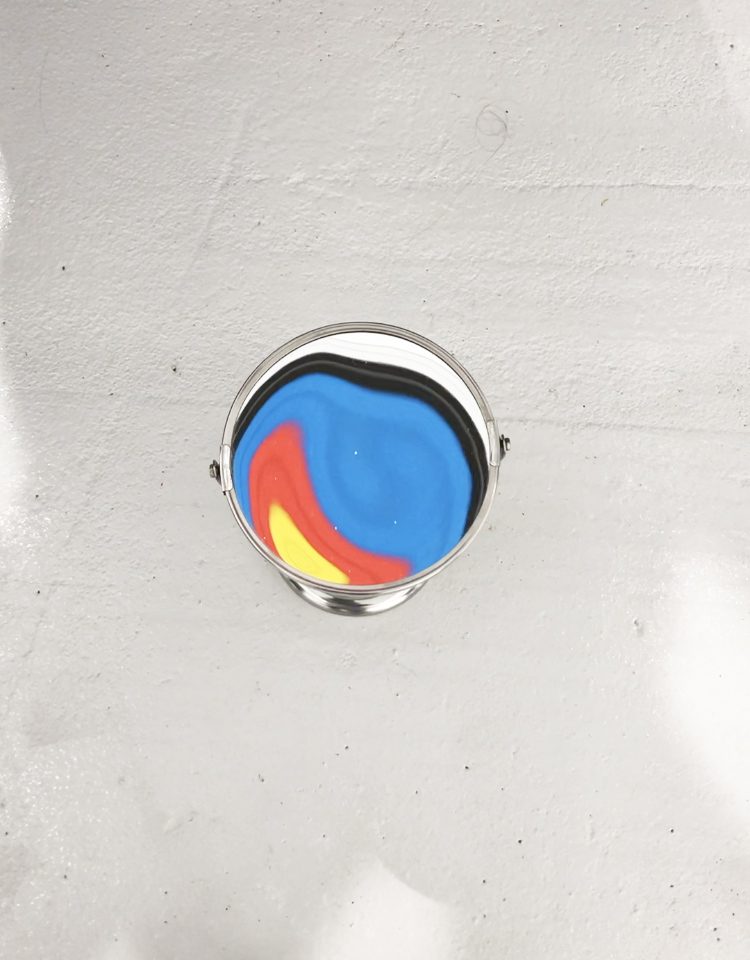 «This work is the prototype of something that I would like to make in a larger scale. On the floor there is a concave mirror of increased vision where a target is reflected that is painted on the ceiling. When we look at it in person, with our two eyes, the concave mirror reflects two targets, one for each eye. It is almost like when you have had a couple of drinks. The moment you go from looking at it with your eyes to looking at it through the camera of your cell phone that only has one lens, the closer you get to it the more definition you get and the target moves as you do. When you think you have hit the target you move and the target changes. If there were only two dimensions it would be very easy because it would never change the shooting point, but the third dimension that allows us to move through the space causes the target point to never be in the same place. When this piece came out it was quite magical». 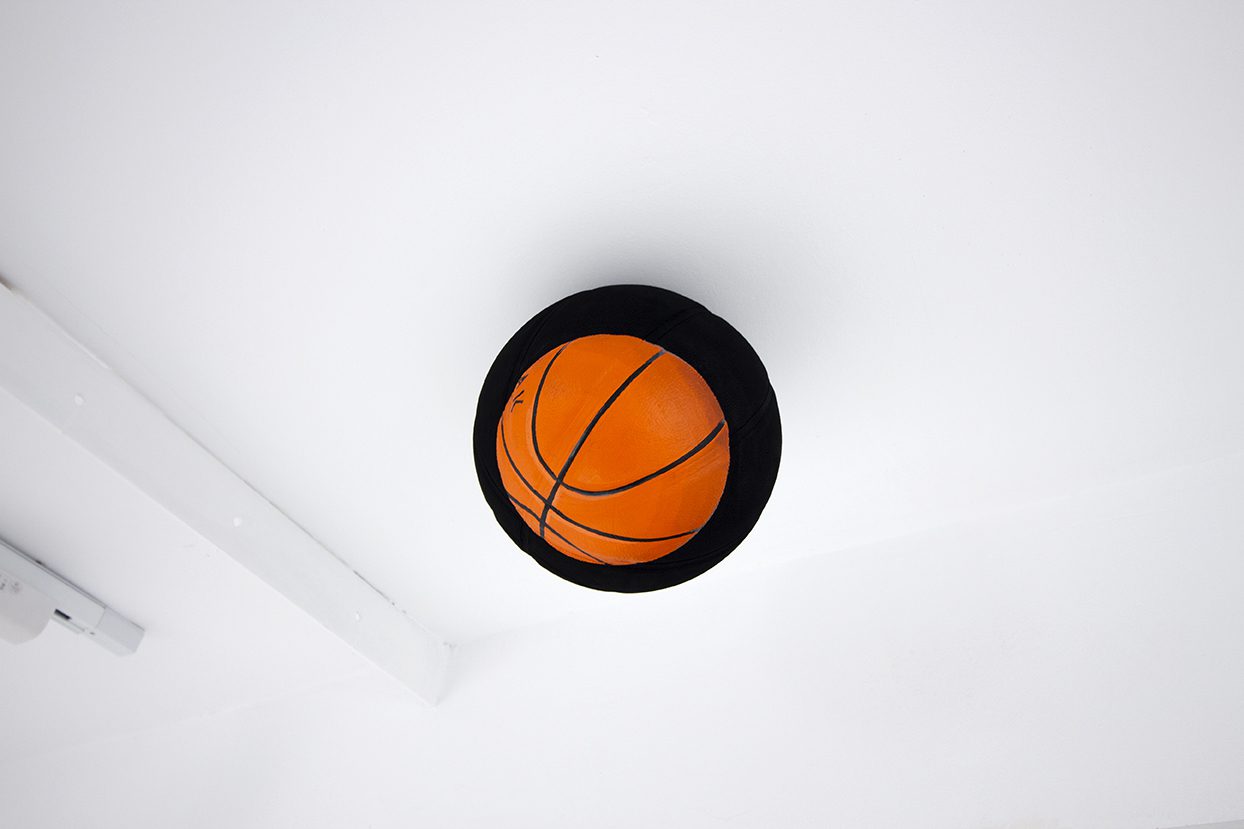 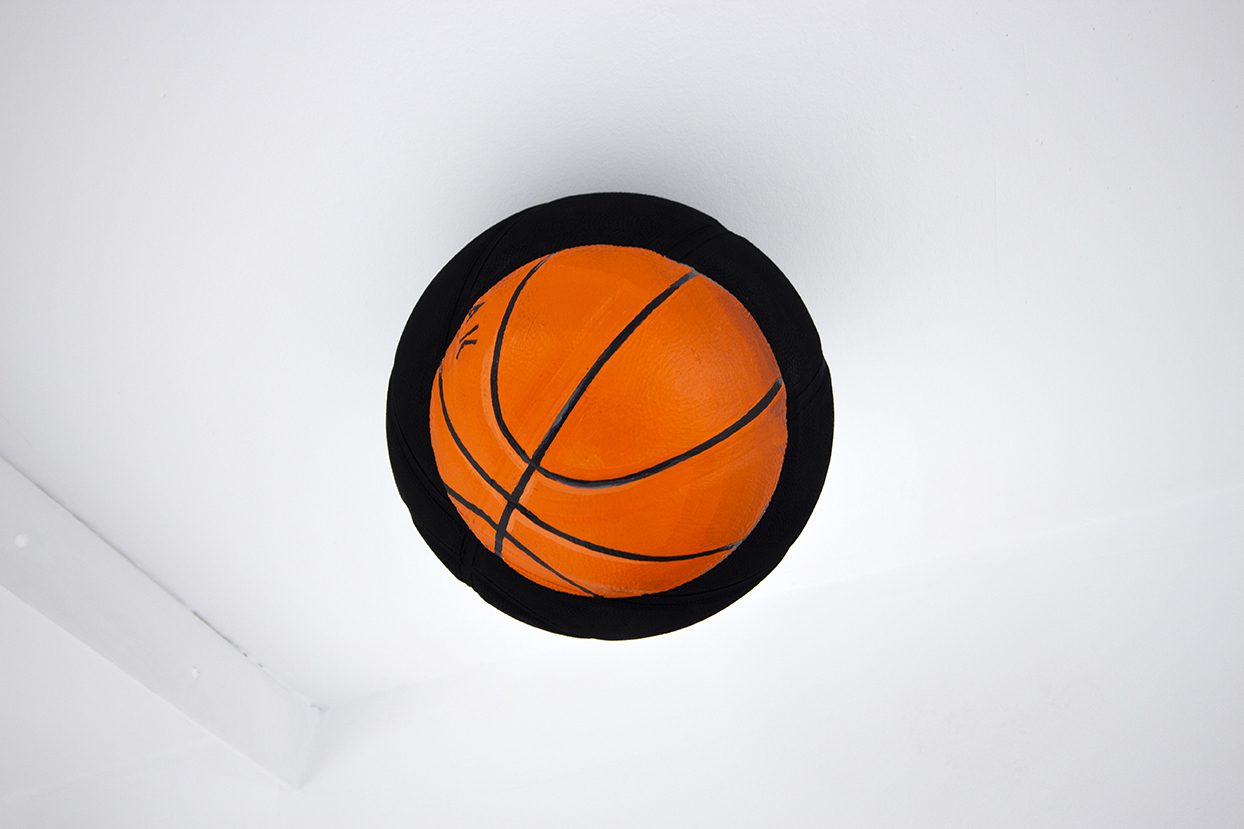 «The concept of this work is to paint the object on itself but at a smaller size to make it look far away. It plays with the representation of the object on itself to give it perspective. There are two balls placed on the ceiling at different distances: one with the ball painted very small, which looks further but it’s positioned closer from us and another ball painted bigger but positioned farther away. This means that the way they are placed, they seem to be at the same distance if you take a photo of them». 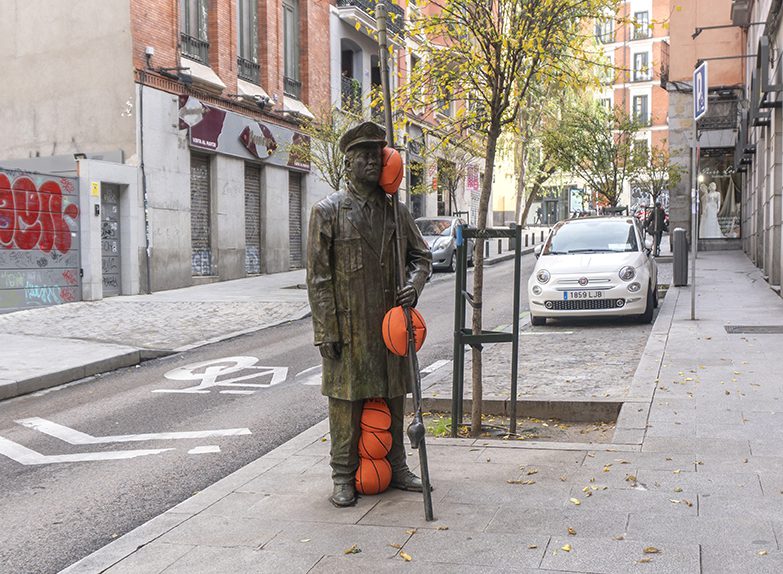 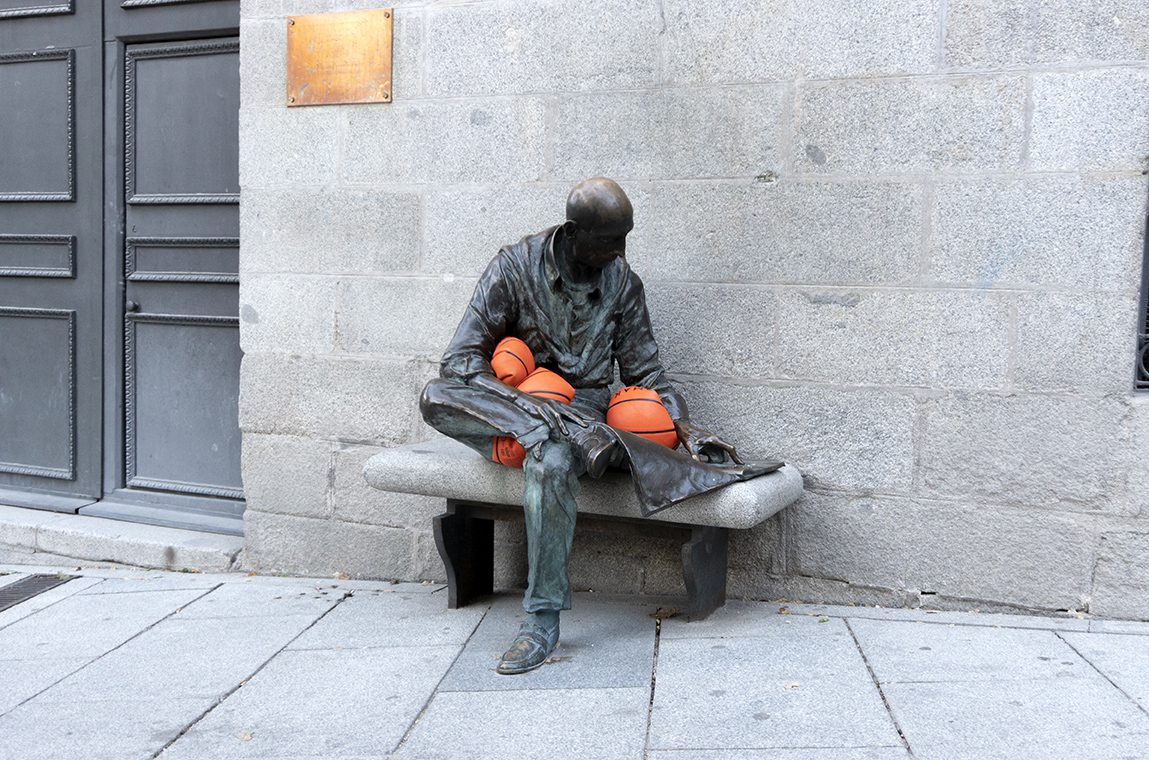 «This is what I call the ‘Bonus Track’ of the exhibition and as almost all of them it is also a prototype. This one is also planned to make it much bigger in a sculpture. It is a figure-ground exercise in which in the end the figure is the protagonist that you stay with and what attracts attention, and the background serves as a stage for the protagonist. These urban sculptures located in Madrid city center represent a symbol of power. They have a project behind them, they are made with iron, a noble material… I seek to deform these sculptures that are set by the political power, with something so easy, so shrill and so profane as a few 4 euro basketballs that enter the sculpture voids by being deflated and that once inflated they cannot leave. It’s like getting inside a brick house and starting to make another brick house inside. They adapt to the sculpture making the holes that were the background become a figure and mutate the original with something that completely kills that homage and solemnity that the statue has. There is a part of contraposition between materials, between power and accessibility. I try to ‘surround’ that air and you can do it out of iron, cement, rubber or balloon, but the consequence is the same: an absence of space. With these last materials it is easier to recover that space, but with noble materials politic power is able to ‘steal’ or close down spaces in a more permanent way. It is a poetic exercise of converting a tribute into something else, turning the figure into a background and the background into a figure. I haven’t had any permission to do this but since it is something so simple to remove it has not caused any problem. Soon a bigger project will come up under this same concept».